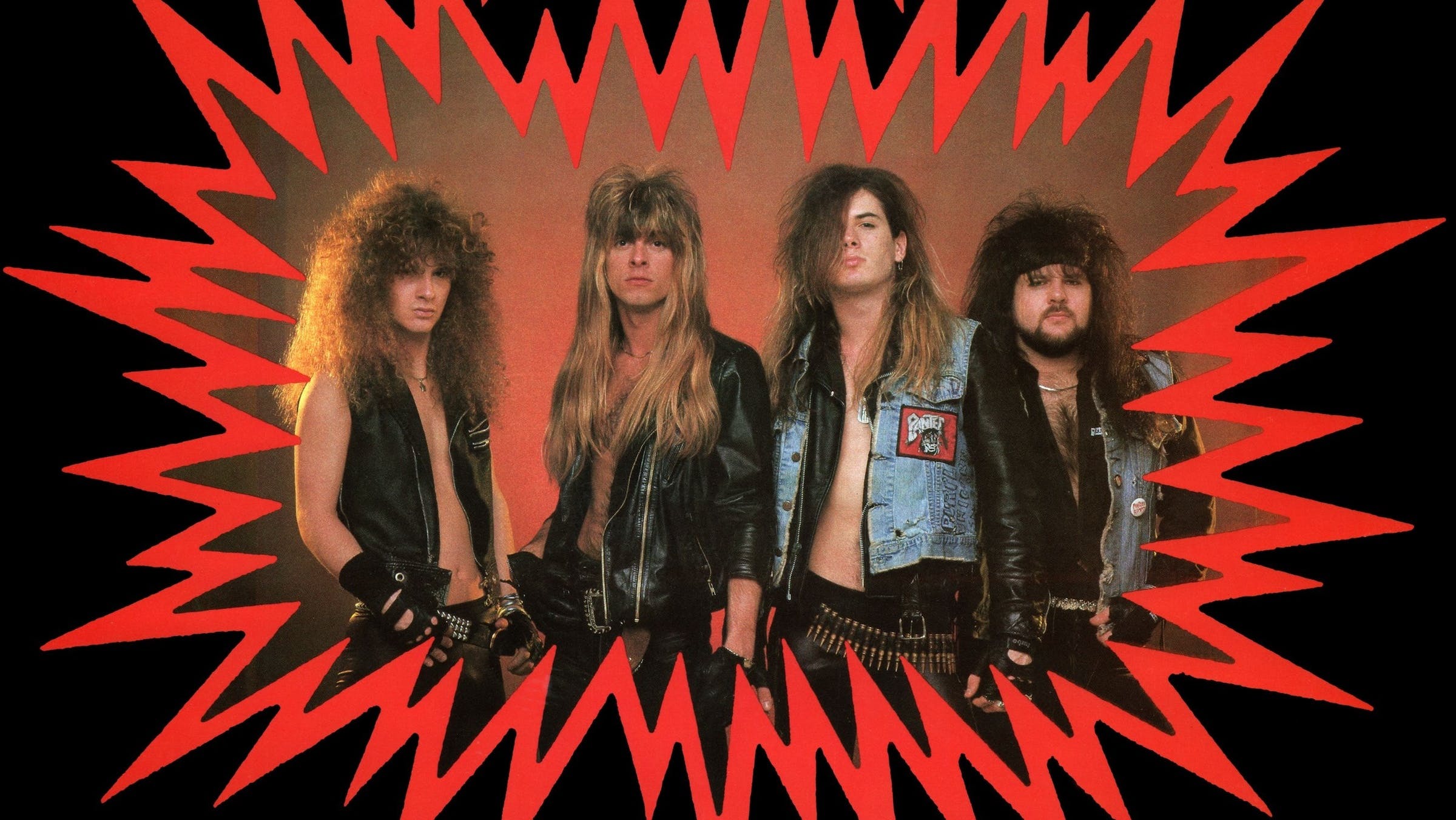 As most metal fans have been told by both amateur music historians and snarky haters, Pantera weren’t always pioneers of aggressive groove metal the way they’re regarded as being now. Sure, the four boys from Texas went on to save American metal with their distinct mix of thrash fury, southern swagger, and dirtbag honesty...but once upon a time, like most bands in the ‘80s, Pantera were glam as fuck. And not Slayer-with-eyeliner-posing-over-a-model glam -- Sunset Strip glam. They teased their hair, squeezed into Spandex, and tried their best to sound like Van Halen and early Priiest. Never forget that before he named himself after an amount of marijuana, their guitarist was called “Diamond” Darrell.

Above: Pantera from the back cover of 1984's Projects In The Jungle.

Plenty of snickering heshers like to point out Pantera’s Aqua Net days as proof that the guys who wrote The Great Southern Trendkill were actually super trendy. But that opinion is shortsighted, and shows a lack of understanding about how growing up works. In truth, the fact that Pantera were a glam band only adds to their legend. It shows that for all their muscular angst, they were also a band willing to progress, who were excited about metal since its infancy. And if any of these detractors ever bothered to listen to the band’s glam albums, they’d realize that some of those tracks totally slay.

The reason fans are disheartened to find out Pantera used to be a glam band (hey, this journalist included when he first learned) is because their strength came from standing against all of hair metal’s shallow horseshit. While millionaires like Axl Rose and Tommy Lee were making music about banging models and swimming with dolphins, these dudes from Arlington wrote huge, primal anthems to ditch weed and disillusionment. By the ‘90s, hair metal was all about style over substance, with songwriting taking a backseat to make-up and clothing. Pantera, on the other hand, created music without a bit of twinkle, and looked like they couldn’t afford an entire shirt between the four of them.

Which is why it’s especially rough to see just how glammed out Pantera once were. When Power Metal was released thirty-one years ago, the band was still looking pretty poofy, but at least they were wearing black. But on the back cover of 1985’s I Am The Night, well...see for yourself.

“Rex Rocker.” It was a different time. Also, man, how confused does Vinnie Paul look?

That said -- does it really surprise anyone that these dudes were so theatrical? It’s no secret that Dimebag worshipped Eddie Van Halen and Ace Frehley. Phil Anselmo has always rocked a Venom shirt, and while that band may have sung about smashing dead chicks while Satan watched, they dressed like Hell’s gymnasts. Pantera was growing up at the same time that metal was; that they wrote jaunty songs about being a cat-eyed urban warrior-poet just means they were all-in from the very beginning.

But then, Pantera did something more bands needed to: they grew up. They incorporated new influences, got turned on to bands like Metallica and Exhorder, and decided to ditch the window dressing. To some, that may appear trendy, but more than anything, it displays considerable self-awareness. Pantera could have forged ahead with the flavor of the hour; instead, they grew out of trying to be something they weren’t, toughened up their sound, and changed metal to its very core.

That’s what’s commonly overlooked -- in 1990, when the band released Cowboys From Hell, glam was still king. In hindsight, historians like to imagine that the minute the ‘80s became the ‘90s, everyone traded their stretch pants for flannel. But the first few years of the ‘90s were still sort of the ‘80s, and hair metal was still the dominant musical life form. Pantera weren’t chasing a shift in metal, they were the shift. By incorporating thrash into their sleazy southern sound, they broke the mold. That shows a dynamism that’s rare and beautiful in bands, which wouldn’t have existed for Pantera were it not for their time as poodle rockers.

In the same way the transition between decades was a blur rather than a line, so was the growth in Pantera’s sound. The tracks on Power Metal have enough of the swagger, menace, and sneer that albums like Cowboys and Vulgar Display Of Power overflowed with, that it’s most definitely a Pantera album, even if everyone looks a little silly on the cover. Listen to Phil’s vocals and Darrell’s riffs on Hard Ride and try to act like you wouldn’t smack the steering wheel with the butt of your hand while listening to this song.

Maybe Pantera’s hair metal past was embarrassing during the height of their fame, when it seemed like they were trying to hide or escape it. But these days, with Vinnie and Darrell dead and albums like Vulgar Display and Far Beyond Driven entering their late twenties, there’s not only no hiding the past, but to do so seems ridiculous. Why worry about some dudes looking a little clownish in their youth when their later material was the stuff of legend?

If anything, now that the Abbott brothers are gone (miss you, boys), we can now look at their lives as a whole, and see how their first few albums were just stepping stones to them writing some of the most incredible metal songs in the genre’s history. If you’re still hung up on the fact that those dudes were figuring it out in the ‘80s, maybe you’re the problem.

Nothing is less cool than being self-conscious about the past. It’s totally normal to do so -- as teens, we struggle to not seem like kids; as twenty-somethings, we roll our eyes at our teens -- but overall, guilty pleasures are a thing to grow out of, because the ultimate sign of maturity is knowing that all that bullshit lead you to who you are now. Sure, pre-Cowboys Pantera stand in stark contrast to the legacy-cementing band they later became. But to see that as anything other than awesome -- something you can have a laugh at, and then recognize as a necessary growing pain -- is to be childishly ashamed of one’s self. And if Pantera can grow up, surely we can, too.