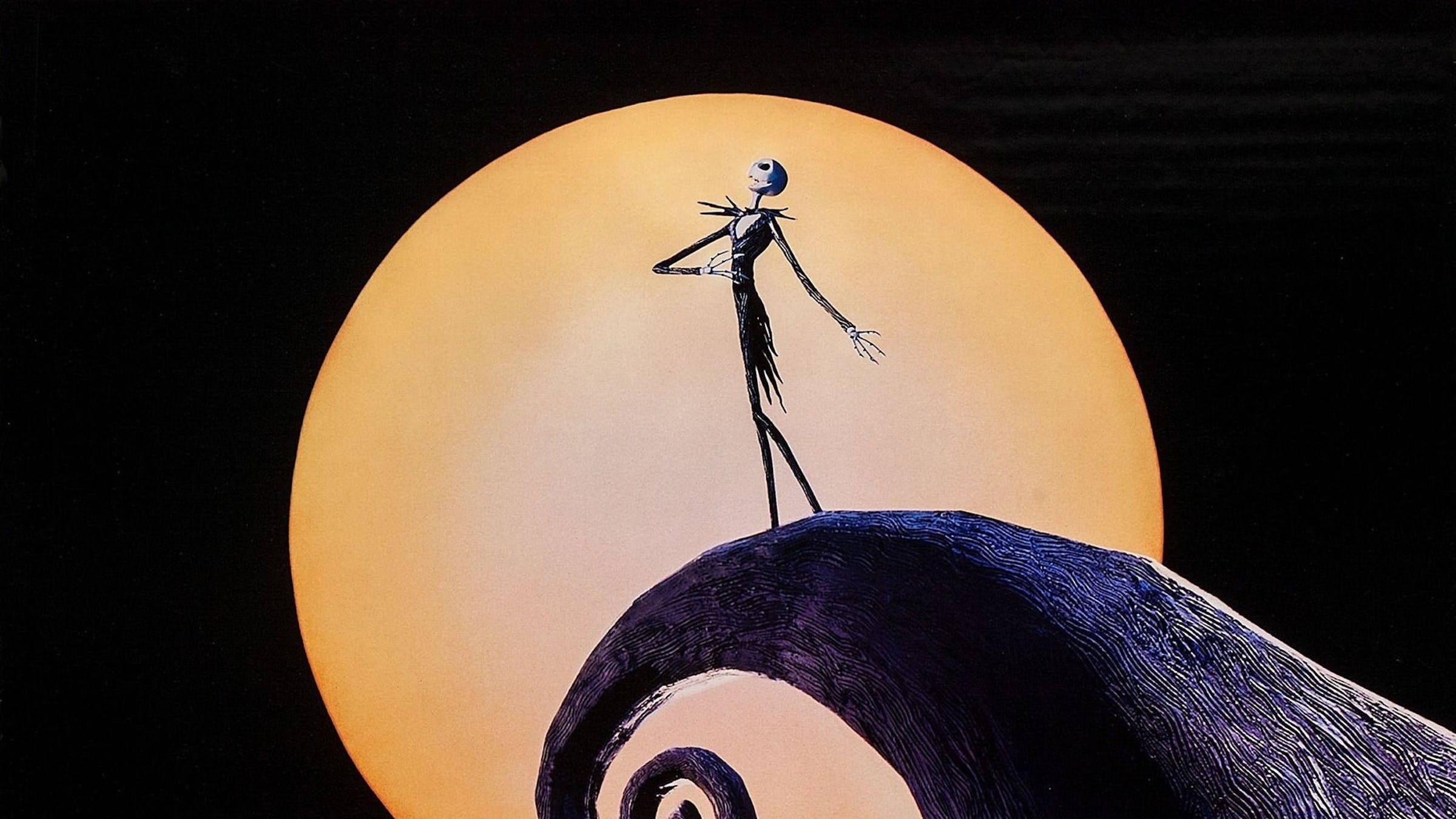 For the people involved, The Nightmare Before Christmas was a gamble – inspired by a poem by oddball visionary Tim Burton, painstakingly created with stop-motion animation, and featuring a cast of lovable characters who were primarily ghouls and monsters. Disney, not wanting to risk the wave they were riding with films like Beauty And The Beast and Aladdin, deemed the film too scary and released it through Touchstone Pictures, giving themselves enough distance to abandon it if needs be. Instead, Nightmare became a massive success, its unique style and benevolent morbidity appealing to audiences around the globe.

What Tim Burton and Disney might not have foreseen was the dramatic impact the movie would have on the world of rock music. For fans of goth, punk, and heavy metal, The Nightmare Before Christmas was a heartfelt revel in all the spooky misrule they held close to their hearts. But moreso, the movie’s central characters gave these cultural black sheep figures with whom they could identify, strange and alarming icons who still just wanted to live happily ever after. That, coupled with the movie’s distinctive look, made it a rallying cry for everyone who wasn’t evil, just misunderstood.

If for some reason you've never seen it – and if you haven't, you really should – The Nightmare Before Christmas is the story of Jack Skellington, king of a world that's the living embodiment of Halloween. But Jack's burnt out on the same old scares, and longs for something new – which he finds when he opens a strange door and gets thrust into Christmas Town (like his world, but, you know, with Christmas). Obsessed with this novel idea, Jack decides to take over the holiday himself, and has Santa Claus kidnapped so he can play the role. But Jack's efforts are misguided and disastrous, and it's up to Sally, a lonely Frankenstein rag doll girl, to try and stop him and save both Halloween and Christmas.

From the outset, what drew rock fans to the film was that it didn’t pull any punches with its depiction of every weirdo’s favourite holiday. The Halloween of The Nightmare Before Christmas is both no-holds-barred spooky and rambunctiously fun. Burton and director Henry Selick didn't give audiences a bunch of innocent Disney goofballs – their monsters are born to terrify and disgust. There’s a hanging tree, a clown that rips its own face off, and a boogeyman who’s full of writhing insects. Corpses and severed heads are referenced constantly; the vampires win a blood-drinking medal.

At the same time, these aren’t creatures of horror: they’re beings of Halloween. The citizens of Halloween Town’s slightly-crooked landscape seem to be in perpetual good humour, celebrating the arrival of their favourite day rather than looking to, say, hunt humans for sport.

The movie's original music echoes that freewheeling circus attitude. Unlike those of other Disney films, Nightmare’s songs all have a bluesy shake-rattle-and-roll to them, thanks to composer Danny Elfman’s time in jaunty goth-rock outfit Oingo Boingo. There are plenty of overcast bassoons and reptilian reeds, but it’s all tempered by a finger-tapping rhythm, and that middle ground connected with fans who saw monsters and maniacs as reflections of their own hard-rocking selves (the most traditionally Disney song on the soundtrack, What’s This, offers a refreshing change from the tracks around it, and makes Jack's arrival in Christmas Town feel extra wholesome).

The heart of the tale, though, is Jack and Sally, star-crossed lovers from beyond the grave. Jack is the king of Halloween, but he’s bored by the theatre of agony and wants to warm himself at the fire of something joyful, colourful, and new. Sally is a slightly lopsided introvert who was created haphazardly and wants only to experience the terrifying world she lives in. While the former storms off thinking he can do Christmas better than Santa Claus, the latter fights to save him from himself; in the process they find each other. Their narratives showcases two classic archetypes in rock'n'roll – Jack’s resonates with those outcasts and misfits who desperately want more and more, while Sally’s offers sympathy to the quiet and talented purists longing for a world they’ve only watched from afar.

That sense of unorthodox innocence is something goth fans feel in their cores. While they may love devils, corpses, and methods of execution, most punks and metalheads aren’t here to hurt anybody. Not only that, but they believe that if you’d just let them fill the room with coffins and cobwebs, you’ll have as good a time as they do. That sense of menacing fun bloomed throughout the ‘90s and 2000s in the form of properties like Roman Dirge's Lenore and Johnen Vasquez's Invader Zim, which offered solace to kids in black who were sweethearts even as they worshipped Edgar Allen Poe and Slayer. Nightmare gave these outsiders adorable, stylised representations of their sweet-but-scary inner lives.

By the early 2000s, when those inspired by the movie had established themselves as rock icons, Nightmare's influence was felt everywhere. Pale, lanky frontmen like AFI’s Davey Havok and My Chemical Romance’s Gerard Way frolicked about in oversized suits, looking for all the world like everyday Jack Skellingtons. In blink-182’s Miss You, the song where the band officially went emo-punk, they sing, 'We can live like Jack and Sally if we want / Where you can always find me / And we'll have Halloween on Christmas / And in the night we'll wish this never ends.'

In 2001 Tom DeLonge and Mark Hoppus launched Atticus Clothing, full of Tim Burtonish crimson hearts and wonky skulls. Meanwhile, as Corey Taylor became more widely known outside of his mask while performing in Stone Sour, one didn't see him anywhere without his trademark Jack Skellington beanie. All of these artists saw themselves as denizens of Halloween Town, shadowy and askew even while their hearts were always in the right places. Disney finally caught on to the film's cult fandom in 2008, when they released Nightmare Revisited, an album on which the movie's songs were reinterpreted by artists including Marilyn Manson, Korn, Rise Against, and Evanescence's Amy Lee.

In the late 2000s and early 2010s, rock’s obsession with Nightmare seemed to drop off a bit, which is understandable, given culture's natural tendency to shy away from fads that got too big, especially sentimental ones (plenty of mid-2000s punks and metalheads can attest to the sheer glut of Nightmare merch bursting out of every Hot Topic by 2006). But in 2020, with enough distance from any guilty-pleasure embarrassment, obsession with Nightmare has reignited – last year, Vans announced a collaboration with the franchise, and the first rumblings of a live-action remake are echoing throughout Hollywood.

The beauty of Halloween is that it’s a day when all the weirdos and monsters of the world are not only accepted, but joyously celebrated. The meaning of Christmas, meanwhile, is the feeling that even the coldest hearts can sidle up to the fire and warm themselves alongside their fellow passengers on the road to the grave. For punks, goths, and metalheads, The Nightmare Before Christmas struck both those chords, offering them a world where they could make merry with their gloom and doom without ever having to say their sorry. Everyone hail to the Pumpkin Song.