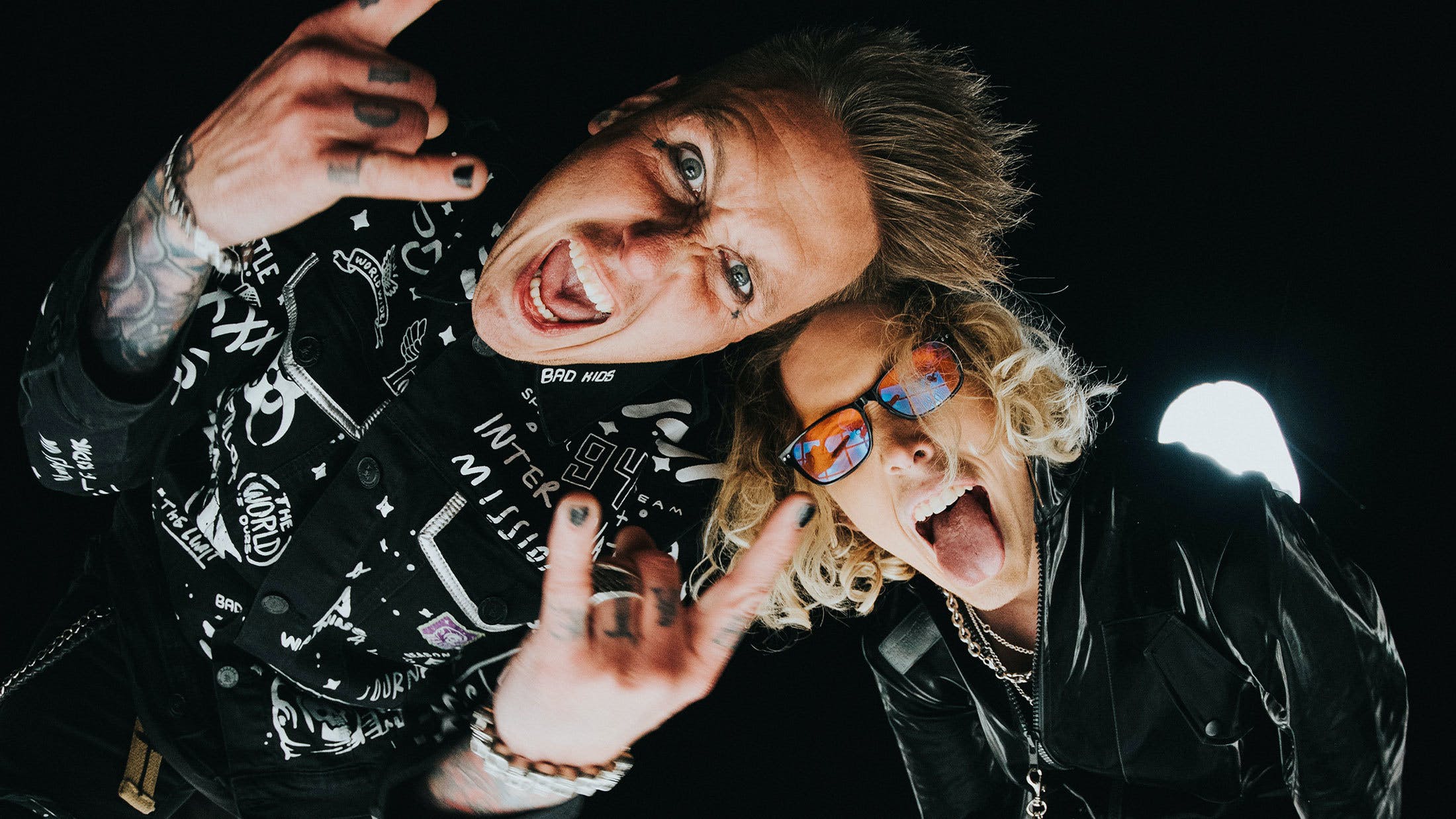 The world is standing still right now, but music might just be moving faster than ever before.

October 14, 2020. Rising TikToker Jeris Johnson throws a 43-second DIY clip of himself reworking Papa Roach classic Last Resort up on the bitesize video-sharing platform with the flippant lowercase caption “could u imagine if i got a real papa roach feature on this”. Roughly 1 million subscribers, 2.1 million views and three months later, a full Papa Roach x Jeris Johnson version – imaginatively titled Last Resort (Reloaded) – has dropped as the cornerstone of Jeris’ My Sword EP, complete with high-production music video, and even its own merch line.

“When TikTok first came out, it was like ‘What the fuck is this new platform?’” Papa Roach frontman Jacoby Shaddix reflects with a hearty laugh, from the attic space of his Sacramento home. “‘I’ve got to do this now, too?!’ But one of the things that has kept Papa Roach afloat is that we’ve always kept on top of social media as a way to connect with our fanbase. The other thing about social media is it’s given this platform for new artists to show off their skills. When we saw Jeris putting his own flip on Last Resort and how it was poppin’ off, I had to investigate.”

An invitation to the studio where Papa Roach are currently wrapping up their 11th studio album (“It’s fire,” Jeris teases) saw the 24-year-old coming face to face with his rock heroes and finding much in common: a hunger to innovate, willingness to collaborate and the desire to celebrate a banger that still strikes a chord 21 years after its release.

“It came about as organically as it looks,” Jeris nods. “It felt like I teleported from being in my bedroom to sharing a stage with Papa Roach within about a month, which was mind-blowing. Jacoby has become ‘Uncle Jacoby’ over the past months. I like to think of it as a passing of the torch kind of thing. It’s just so cool to have my rock star heroes giving me that push.”

“Equally, I’m an old dog,” Jacoby chips in. “It’s hard to learn new tricks. But as I’ve been mixing with young cats like Jeris or grandson, I’ve been learning that there’s a different way to make your music and reach the people. As much as I’m here to teach, I’m here to learn, too!”

The child of musical parents – his mother is a singer and his father a drummer – Jeris grew up with artistry in his blood. He pinpoints the first time he heard Papa Roach, though, as a beginning for his own creative identity. At a football jamboree, aged eight or nine, his coach dropped the tune to get his charges psyched. Safe to say it worked. “It was tough,” Jeris remembers. “It was edgy. It had cuss words in it which meant if felt kinda bad. It was the first time I’d been exposed to stuff that made me cool-as-fuck just to listen to.”

The metallic infatuation grew, as Jeris progressed onto bands like Avenged Sevenfold, Lamb Of God and Slipknot, with whom he truly fell in love for “the lore; the story; the cult aspect of it; the fact that it felt like a movement more than simply music”. His first band Camps was started aged 13, with Jeris on drums and vocals. A more metallic outfit named Audiophobia would dominate his high-school tenure.

As the years passed, however, Jeris became acutely aware that rock was at a standstill. He was growing older, while the tunes on the radio stayed the same. The mainstream groundswell in heavy music he was craving never came. That command of edginess and unpredictability had been taken over by other outsider sounds, most notably in the world of SoundCloud rap. “I could play Metallica to my grandma nowadays,” he reckons, “and she’d be like ‘Cool! This is acceptable.’ But if I were to play her any one of that new breed of SoundCloud guys, she’d be plugging her ears, telling me to turn that shit off.”

Rather than jumping ship, however, he’s trying to reload rock for the next generation.

“Rock needs a new standard bearer. It needs a new leader, and I want to be that leader. I want to make rock that sounds like it came from the future rather than living in the past. It literally needs to sound like it’s come from 2030. That’s what’s going to make it cool again. That’s what it’s going to take to claim back that alternative crown.”

On TikTok, you’ve got a matter of seconds to catch your audience’s attention, Jeris reckons, and every beat counts.

“No more old man drums and guitar. I love that music, but it’s been done. They invented modern heavy music by taking clean guitar amps from the 1930s and turning them up all the way to the point where they started to break and distort. Now it’s about trying to do the same thing with my computer. It might not sound like anything you’ve heard before, but it has that rock energy.”

Jacoby sees the parallels between 2021’s crop of genre-melding firebrands riding the crest of a digital revolution and the nu-metal scene, of which Papa Roach were a part, coinciding with the proliferation of broadband and the MySpace phenomenon all those years ago.

“For us it was always about melding genres and bringing new things together. Watching Aerosmith collaborate with Run-DMC as a young kid. Seeing Beastie Boys throwing guitars into their rap. Watching bands like Faith No More, Korn, Deftones and Incubus fusing styles. It’s rad to see there’s a new generation that’s embracing that melding of styles and bringing sounds together while using technology to get it out there.”

“Matter cannot be created or destroyed,” Jeris picks up. “Everything that’s created needs to come from something that already exists. But it’s not just about combining rap and rock any more. It’s about taking 10-plus things and combining them to the point where you need to create a new word to describe what it is.”

Compared to the grassroots bedrock of sweaty shows and hard yards earned on which Papa Roach built their reputation, we can’t help but wonder whether there might be a transitory negative to the TikTok phenomenon, with so many creators competing for attention in this crowded digital space, and rapid rises to prominence mirrored by equally sudden departures from the limelight?

“I’m a firm believer that the cream rises to the top – on any platform, in any space, at any time, through any creative medium. We had our boots on the ground coming up. We’d be out there flyering and playing shows in our backyards, at keg-parties, teen centres or bars. But there were a million bands that came and went in that time, too. Nowadays that happens on the screen of your phone. Not everyone is meant to be a musician. Not everyone can make music that connects with people. Time will weed that shit out. Ultimately, it’s down to the people to cast their vote. They’ve cast their vote for P-Roach in the past. Now they’re casting their votes for Jeris. Success is still in the fans’ hands. Now it’s just literally in their hands.”

And what of the need for that visceral, in-the-flesh connection with (and between) fans? Much as recording together feels like a nice substitute for offering a support slot to a young artist in the time of pandemic, is there a danger fans could become distanced from a genre that traditionally needs to be experienced live and loud?

“Nothing’s better than 100 hearts beating in the same room, jumping and moshing,” Jeris nods, emphatically. “I hope that that’ll always be there. But it’s not mutually exclusive. I don’t look at the internet thinking about its limitations. I think about how it’s limitless. Bands are getting bogged down about not being able to play a live show right now, while I’m trying to focus on how we can do 10 other really cool things. And, although it hasn’t been done yet, who’s to say there couldn’t be an online movement as powerful as an in-person one? Technology is getting pretty fuckin’ good. Me and Jacoby are doing a fan Zoom session in a couple of days. Imagine what that might be like in 10 years' time…”

TikTok is just a platform for jumping off, he stresses: a stage on which “you can perform or you can choke”. My Sword is the first step of what he promises will be his graduation from the app, with many longer-form releases to come. Indeed, the twangy attitude of earlier single Damn! (alongside its Chad Kroeger-featuring remix) and the Linkin Park-alike modernist heaviosity of Roses Red already prove he’s about much more than updating other people’s work.

Live shows will inevitably follow when possible. The fast-moving nature of modern music consumption will endure, even as he outgrows the 60-second videos for which he’s known. Previously bands had years to chart their rise. In this world, it’s a matter of weeks.

“My three-point plan is as follows,” he expands, with knowingly outrageous purpose. “First, take over the internet. Then, build my army of followers to unstoppable levels. And, when the world is ready for it, we’re going to take it out on tour with ‘real’ people and ‘real’ community to make it a ‘real life’ thing.”

In the meantime, though, it’s about pushing this moment as far as it can go.

“I’m kinda riding the wave right now,” Jeris shrugs, happy not to overthink. “It’s all happened to me, really, in the past three months. I’ve gone from my bedroom to [playing with Papa Roach and speaking with Kerrang!] in a very short period. I’m open to anything, if it feels right. I don’t care about ‘the rules’ if what I’m doing feels like magic.”

“Opportunities abound,” grins Jacoby. “It’s the beginning of a new era. There’s potential that we hit the road together. There’s potential that Jeris features on a Papa Roach track in the future. We’ve started to build that relationship and respect for each other in the scene. It feels like the Rock Gods are smiling on us. We’re already celebrating 20 years of Last Resort, then here comes this motherfucker wielding a sword of savagery and giving it a new lease of life. The world’s gonna be stoked once they peel back the layers and find out who he really is!”

The Papa Roach man throws the horns before logging off Zoom, looking as energised as he has in years.

“We’re living in the future, man! There really are no limits on where this can go. I feel like my shoes should be able to tie themselves!”