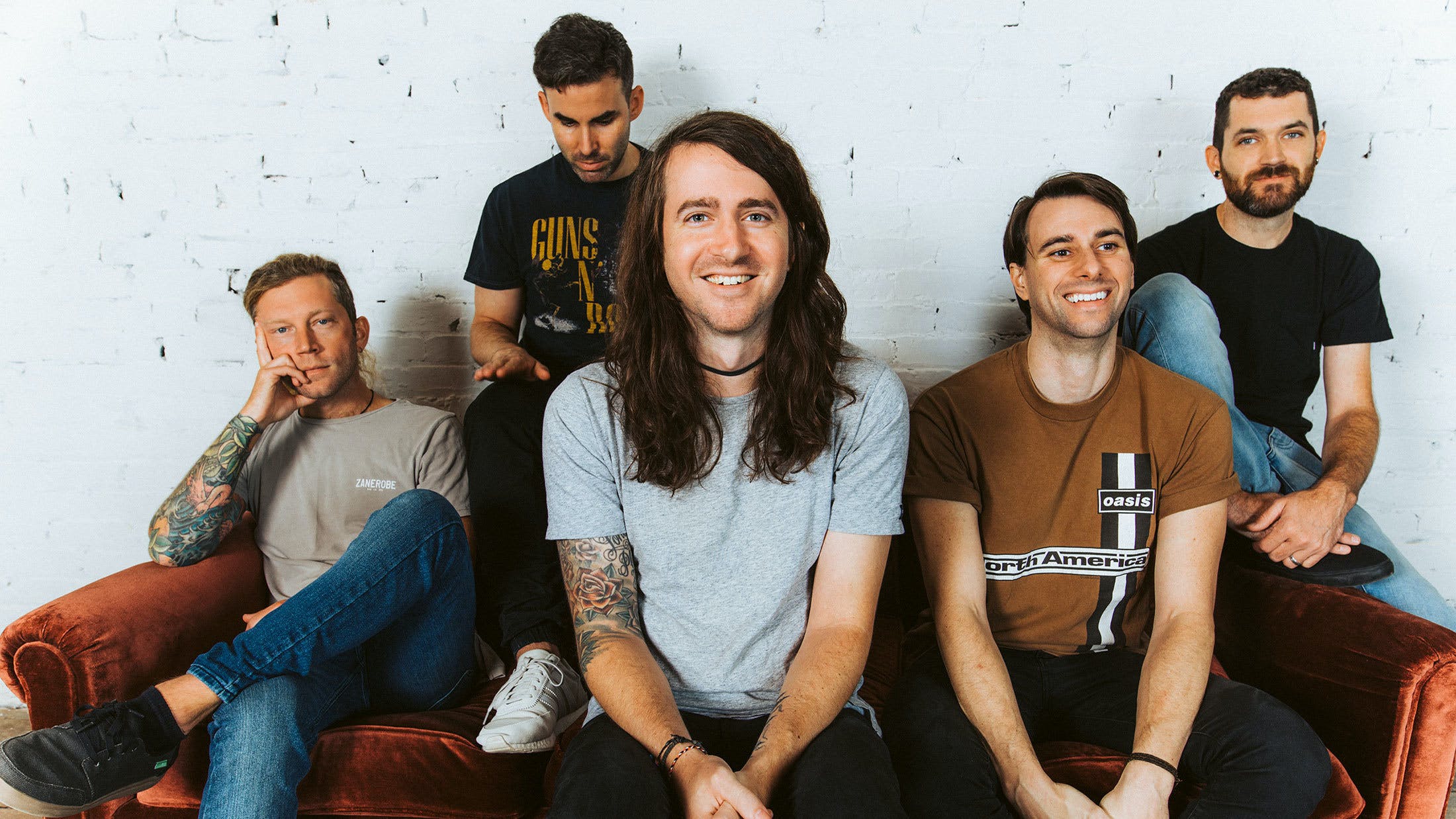 This year marks 15 years since emo mainstays Mayday Parade formed in Tallahassee, Florida. After 2007 debut LP A Lesson In Romantics – a record we recently named as one of the greatest emo albums ever – turned them into Warped Tour titans, the five-piece have since solidified themselves as veteran forerunners in the world of emo and pop-punk. Following on from 2018 album Sunnyland, the band today announced a new, three-song EP titled Out Of Here, which will drop October 16.

The record’s first single, Lighten Up Kid, is out now, and to celebrate, we sat down with frontman Derek Sanders for a chat about the new EP, and some reflections on the decade-and-a-half he’s spent with Mayday Parade…

Derek, how does Out Of Here compare to Mayday Parade’s previous material?
“It’s got plenty of energy and very much possesses the rock’n’roll aspect of our band. I can’t wait for people to hear it. Out Of Here doesn’t stray too far from what we’ve done in the past, and I think it’s a really strong representation of what Mayday Parade is about.”

How long have you guys been sitting on these songs?
“We had to change plans slightly because of the coronavirus pandemic. It was March when we were recording these tracks, which was right when the whole virus thing broke. For the past year or so we’d been heading into the studio to record stuff here and there, without any solid idea as to what we were building up to. Once the pandemic hit, we had to take a step back from the touring plans and other things we had going on. But the one thing we could do was put out new music, so we decided to take some of the songs we had and release them as this EP, and there remains four or five songs that we’ve recorded which we’re going to hang on to for the next album. Rather than waiting however long to finish a full-length record, though, it seemed logical to drop some material now and hopefully make people happy with it.”

Lighten Up Kid is the lead single from this EP. Tell us a little about that one…
“Lighten Up Kid is the most energetic and straightforward pop-punk song on this release. A theme of this EP is moving forward, and that’s something that both Lighten Up Kid and the opening track, First Train, really speak to. Listening to the lyrics, you might think they’re to do with the pandemic, but these songs were written before then, when I was just thinking about how it’s important to not get weighed down by negativity and to try to move on to better things. And that’s what the title of the EP, Out Of Here, means – it’s about this idea that we should always try to move forward with our lives. Lighten Up Kid is a really fun song, and I’m excited to see what people think of it.”

Maturing beyond the glory years of pop-punk and emo is something a lot of the bands in the Warped Tour scene you came up in have struggled with, and many peers from that era have now disbanded, but Mayday Parade are still going strong. Why do you think you’ve been able to hold things together so well where others haven’t?
“So much of it comes down to the people in the band. I’ve known Brooks [Betts, guitar] since I was 12, and we were playing in a band together when we were 12 – that’s the whole basis of this thing. We all played together in bands in Tallahassee as kids, and we all wanted this so badly – it was our dream to make something like Mayday Parade happen. Once we formally got the band together, I knew from the first practice we had something special because we just clicked instantly. From day one, we gave this everything, didn’t think about school or jobs and put everything else to one side in order to be able to tour and make it work. To this day, we still enjoy each other’s company and remain best friends, and we continue to consider ourselves very lucky to be able to play music for a living. Some bands come together and members are meeting each other for the first time, but we grew up together – I think that’s key.”

Have those of you in the band been able to get together recently, or have you been working remotely?
“We got together for 10 days towards the end of August, but that was the first time we’d seen each other since we were in the studio in March. It was amazing to be together with the guys again after so long – we’ve never gone for that length of time without seeing each other in the entirety of the band’s career. We tracked some songs during that time, and we were probably the most productive we’ve ever been because we didn’t know when we’d be together again. While we were all there we shot some music videos and some acoustic stuff, and just tried to produce as much content as possible. Normally, we’re only apart for a month at a time, so it was great to see everyone and be productive as a band.”

You mentioned earlier that you’re currently sitting on some more songs for the next album. Tell us a little more about your plans for that…
“It’s tough to say at this point exactly what we’re going to do, but we have a handful of songs and we plan on getting together soon to do some more recording and maybe even finish the next full-length. We want to get another album done as soon as possible – I’m hoping summer 2021 will be when it will come out. Next year is also the 10-year anniversary of our third, self-titled album, which is personally my favourite album of ours, and I’m excited to do something around that. Whether a tour will be possible or not, I don’t know, but if a tour for that can’t happen then I’d at least like to do some virtual shows or something else to celebrate. We plan on staying busy.”

Finally, it’s 15 years since Mayday Parade began. Does it feel like it’s been that long since you started out?
“In some ways yes; in others no. Sometimes I think back to a tour we did and I’m like, ‘Oh my god – that was 12 years ago?!’ There were so many bands that we played alongside that only lasted four or five years, or a couple of albums, so it’s amazing that we’ve been able to do this for so long. We’re at a point now where we know what we’re doing and what we want. Everything with Mayday Parade is solidified, and I look to bands like New Found Glory and Taking Back Sunday who’ve been doing it for even longer than we have, and I now want to emulate them and keeps this thing going for as long as possible.”

Mayday Parade’s EP Out Of Here is released October 16 via Rise Records.