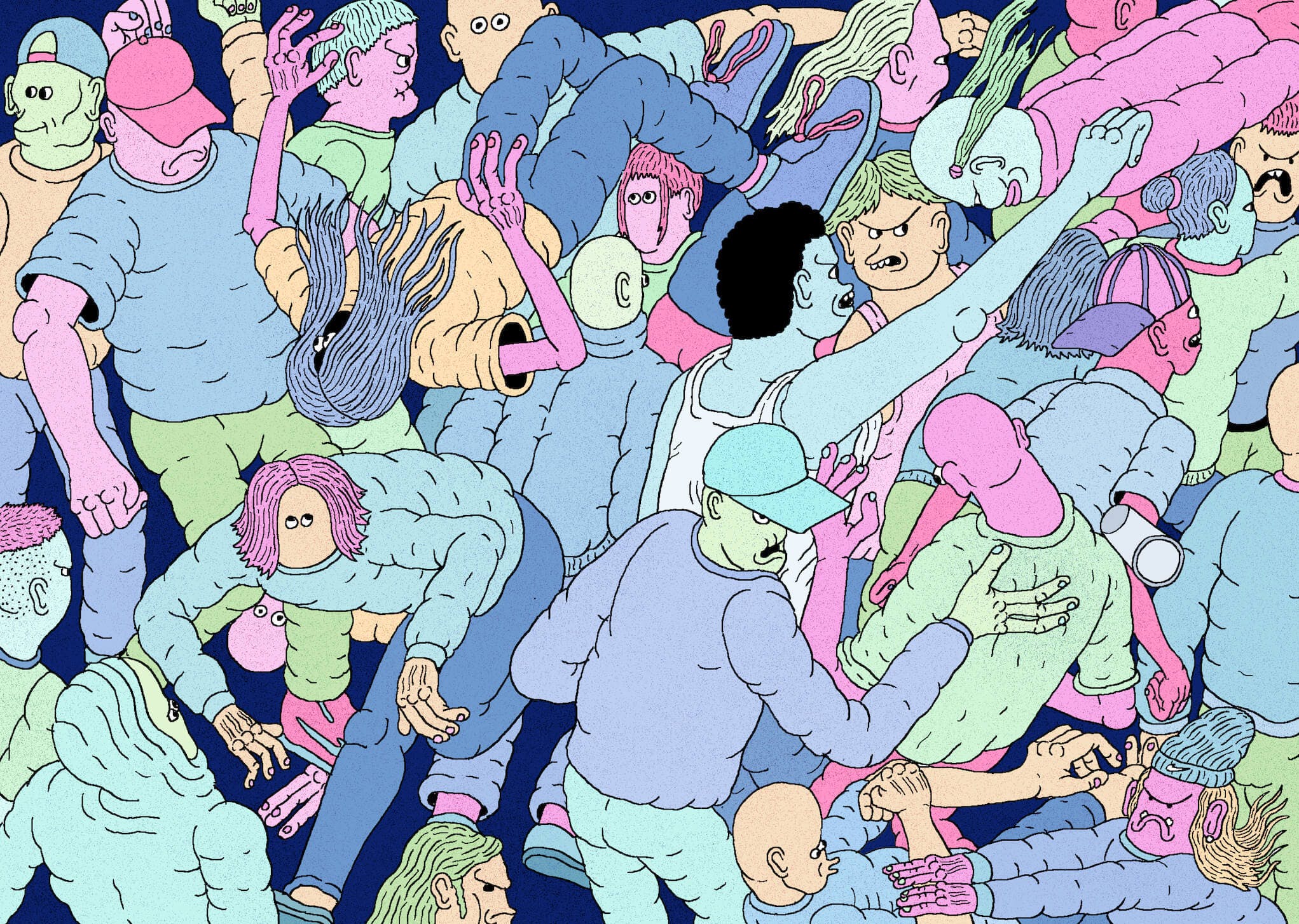 All it took was the first two seconds of 'Wait and Bleed' to make me fall in love with the pit. I don't know how old I was or who I went to the gig with (probably my dad), but at the moment of the opening chord, as the bodies began to lurch, I became part of something bigger than myself; something that only torsos colliding to the sound of clowns playing bins could bring about.

Since that formative Slipknot show, I’ve been in a lot of pits - I’ve spin-kicked beside hardcore kids with freshly inked face tats; I’ve been taken out by human wrecking balls and picked up a nanosecond later; I’ve been in two man stand offs during deserted support acts - and in the middle all of them, I’ve realised that no streaming service, limited edition vinyl or YouTube-to-MP3 rip can compare to smashing into a load of strangers at a show.

In a long-overdue effort to give these slamdancing soldiers the props they deserve, I've written a breakdown (geddit!?) of all of the heroes you’ve probably encountered in the pit.

Good Guy Greg
Remember the human wrecking balls I mentioned a moment ago? Greg is one of these guys. When he’s not in the pit, he’s doing deadlifts while listening to Hatebreed or watching videos of guys doing deadlifts with Hatebreed as the soundtrack. He’s a formidable force in the pit, but seeing as he spends his downtime blasting bis and tris, he’s always there to swoop you off the floor in about 0.000001 seconds should you get knocked over.

The Girl Who Lives in the Pit
Despite being four stone lighter than most people in the crowd and potentially 15-years-old, this girl is putting warriors like Good Guy Greg to shame. She’s destroying everyone within six feet of her while singing along to every song. How does she keep going? What’s her secret? How does she scream every lyric when it feels like your lung is collapsing? The pit poses few questions, but she is one that is impossible to answer.

The Guy Who Should Really be Careful of His Expensive Camera
Thanks to a willingness to trade ‘paid employment’ for ‘two tins of Red Stripe and guestlist’, this dude has agreed to photograph the band at no cost to anyone. He’s an artist - nay, an auteur - so he’s determined to capture the crowd, in all their sweaty, condensed glory. He enters the pit with a functioning DSLR. Few know if he will come out with it.

The Office Worker Who’s Actually Huge in the Scene
Before the reality of electricity bills and minimal musical talent forced them to quit the band, this person was a big deal in a provincial town’s pub-hardcore scene. Now they spend their days poring over Spreadsheets and ignoring emails, as memories of the ‘old days’ slowly pick away at them. It can get really tough at times, like when their line manager asks them to ‘break down’ the data and they have a small convulsion. Luckily, they can still attend the odd gig.

And even though they might show up in ‘smart-casj’, they get so into it that even the lightest front-row jostle turns into a full blown circle of death in their presence.

The Person Moshing While Holding Merch
Sure, they could’ve purchased it after the show. But what if the long-sleeve tee in their exact size had sold out by that time? Better to get it now than spend the next week mashing F5 on eBay in the hope some teenager in Arizona will sell it to them for less the $150.

As such, they’re moshing with one arm aloft, safely cradling their merch and risking a debilitating dislocated shoulder.

The Crowdsurfing Girl
Usually scrambling for air in front of scene-busting fun merchants like Turnstile, this girl somehow manages to be constantly crowdsurfed right up to the stage, where she grabs the mic and puts in a solid stint on vocal duties.

The ‘One and Done’ Guy
We’ve all been this person. In the days leading up to the show, you’ve texted friends to see if they want to come with to see a band of 40-something fathers-of-two play the hits you listened to back when you were 13. Unfortunately, zero buddies are willing to sacrifice their Tuesday evening date with Netflix and an M&S ready meal to mosh like it’s 2004. So you go alone - but they're old, they're tired and they're not as good as they used to be.

You want to leave - you've got work in the morning and the band is phoning it in - but you feel bad ducking out without without paying your respects, so you wait for the first song you recognise, throw down in the pit, and as soon as the last note of that song rings out make a beeline for the exit.

The Shirtless Crew Member
Shirts come off depending on the severity of the pit and/or the likelihood that the band will play Bro Hymn. Either way, do not underestimate the guy with his belly out. A man in the pit with his shirt off is more sensible than appearance suggests. Why? Because his top won’t get ripped off by someone who’s quickly getting swallowed up by a sudden churn of flailing limbs. Plus, he’ll have something dry to wear on the bus home.

The ‘2pm Slot at Warped Tour’ Soloist
This dude just listened to the latest Bandcamp release of a brutal mosh-core band out of, I dunno, Pomona, and he’s determined to catch their incredibly early slot at the (surprisingly heavy) Warped Tour.

Someone called XcutsXeveryoneX labelled these guys the ‘new Xibalba!!!1’ in the YouTube comment section, so the 2pm soloist would rather dump his impossibly patient and lovely GF than miss them. He may be one of seven people in attendance, but his enthusiasm and commitment to being down for life means he maintains a pit all of his own.

Head over to Twitter and tell @JackBlocker what type of mosher you are.