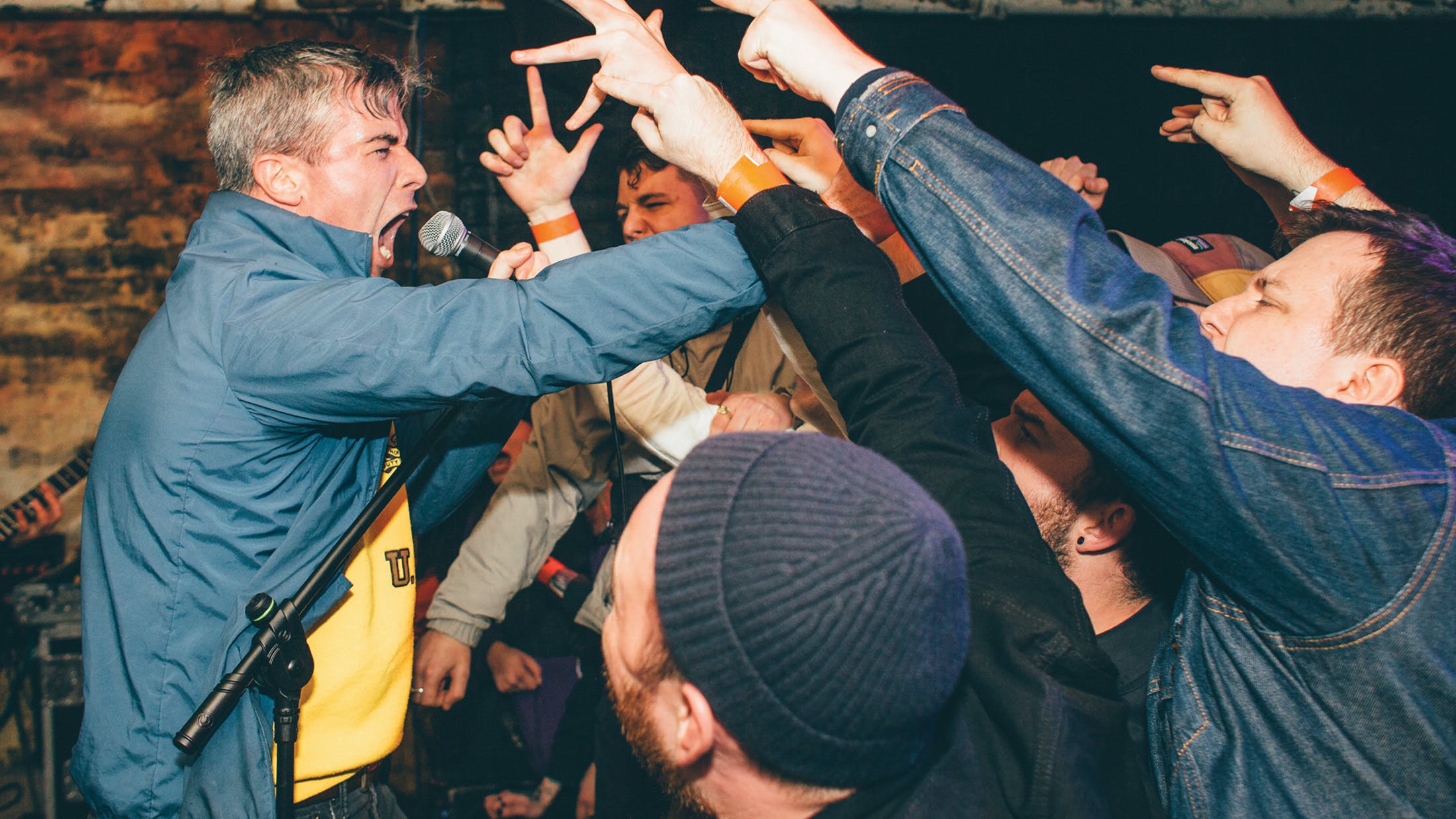 When we met Pat Flynn last December during Fiddlehead’s UK tour, he was in a reflective mood. Specifically, the vocalist was considering the daddy of dad-rock albums, Pink Floyd’s The Dark Side Of The Moon – observing the iconic prism artwork that loomed over the green room of South London’s New Cross Inn. “Y’know, one of my all-time favourite college professors had this poster in his office and he asked me, ‘Are you a Pink Floyd fan?’” recalled Pat, who now teaches high school history as his day job. “I lied and said, ‘Yeah,’ because I wanted to impress him. So here I stand before the same question and I’m not gonna lie to you. I’ve never listened to that record in my life!”

Pat’s musical education came from the straight-edge and hardcore scene in his hometown of New Bedford, Massachusetts before migrating upstate to Boston with scene heroes Have Heart. The airy virtuosity of four English university students held little appeal, yet with Fiddlehead’s 2018 debut album, Springtime And Blind, he found himself writing a concept record of sorts. Almost a decade after his father, LTC Richard Flynn, unexpectedly passed away in his sleep, Pat began processing into words the years of unresolved grief and the toll it had on his family, particularly his mother. Many of the songs are written from her perspective as Pat recognises the depth of her loss, and as an act of empathy attempts to shoulder the burden of their shared bereavement. It is an album that vibrates with ambivalence, torn between the need to move on and the desire to keep the departed close.

At the time of this interview, Pat and his wife were expecting the birth of their firstborn. The irony of talking about his father’s passing while about to become a father himself was not lost on Pat, and in this extension of the interview that originally featured in Kerrang! issue 1775 he reflects on memories of his parents, generational divides and what it all means for his own hopes for the future – as a father and as a musician…

What was it that brought you to write about your father so many years after his passing?
“About a year after my father died it felt like the world was saying, ‘It’s been a year, hurry up.’ In the first moment there was a lot of open concern and attention, and that felt great, because it mirrored this psychological injury. If I have a broken leg, people are like, ‘Woah, that sucks,’ but a broken heart is a little harder to see. So it took a while to work past this anger. I think the best way to combat grief, especially death, is to create. Whether it’s writing in your journal, creating a career, creating an interest, the best way to combat grief is to be the bringer of life into a context in which it’s constantly being destroyed.”

You wrote a lot of Springtime And Blind from your mother’s perspective, but there is one song, 4/17/70, where we actually hear her telling a story about your father returning from Vietnam.
“I guess I secretly recorded that. It was St. Patrick’s Day and as an Irish American family it’s a big day for us. We were having our corned beef and cabbage and I just had this thought to record her telling this story. I thought, ‘This is nice.’ My mother told it well and it’s quick and it’s funny. I gave it to Alex [Dow, Fiddlehead guitarist] and said, ‘Maybe this could be on the record if you can find a riff.’ So when we were in the studio he gave it a shot and when he played it back I had to leave the room because, phew, it was quite heavy. I was almost laughing because the music created an atmosphere that was a lot to take in at once.”

Has your mother heard the album?
“Kind of. I had a nice opportunity. My father’s brother, Charlie, passed away last year relatively unexpectedly and we were at his funeral. The record was done and I showed her the artwork and she was like, ‘Oh my God, this is so nice.’ Alex Henery [guitarist for Fiddlehead and Basement] drew a picture of her from a photograph that my father took in the desert. The story behind the photograph is actually very unromantic. They were driving and my father needed to take a piss. My mother got out and just stood in the sunlight, then my father took that picture. I only found that out recently! But I played that song to my mom at the funeral when she was taking a cigarette and she was like, ‘Jesus.’ She didn’t even know. I don’t know if she’s listened to the whole record yet, but she’s appreciative.

You can also hear your father’s voice in an answering machine message during Poem You. Is that message still on the family answering machine?
“Yeah, that’s still there. That’s been there for over 10 years now. But that’s a landline and they’re going to be gone in about five years, considering the technology.”

Was including these very personal recordings a way of archiving them or a way of externalising those emotions?
“All of it at once. I wanted to historicise it, I wanted to memorialise it, and I wanted to poeticise it. After my father retired from the army he was teaching Latin and English, and he taught poetry. So that was always around and he always spoke in this very deep, stoic poetic way and to me it was un-fucking-believable that the last trace of his voice on the planet was him saying, ‘I’m sorry, I’m not home right now.’ We had nothing else. After he died I would just listen to that on repeat and, man… I’m so glad I got that on the record because now it’s completely immortalised.”

Did you ever show him any of your lyrics?
“I think I showed him the lyrics to Bostons, which is a Have Heart song that you could say is essentially about generations of a family and about how privilege works. I grew up hearing about my grandfather from my dad constantly like, ‘Three jobs a day, blah blah blah.’ My father did a really good job of talking about his dad, and here I am doing a good job talking about my father. So I wrote the song The Unbreakable about that. But then I heard from my cousin, Jay, how my grandfather struggled with alcohol and that made for a tough upbringing for my father and his brothers and his sister. And I was trying to process that because I didn’t grow up poor. My father was not an alcoholic. I didn’t deal with those economic and emotional struggles and that was strange for me. Weirdly, what I was trying to do with Bostons was recognise the privilege I had, so that I could have a better attempt at trying to earn what was just given to me by luck. My grandfather was the son of an immigrant and they’re always going to have it tough and pass that down, so I really saw my father as a cycle breaker. I remember we went out to eat in Providence one time after the record [2008’s Songs To Scream At The Sun] came out and the only thing he had to say about me writing so openly about my grandfather was, ‘He wasn’t a perfect man, but he was a good man.’”

What did your father think about what you do?
“Hey, as a guy that grew up with alcoholism in his childhood, to hear that his son thought it was cool and edgy not to drink? My father was like, ‘You do whatever you want.’ I always forget that I was really young when my first band was happening and definitely when Have Heart started playing he said, ‘This is crazy but at least you’re not drinking or doing drugs, so go ahead.’ He only came to one Have Heart show, which was the last one [in 2009] and he was blown away that it was that big and people had come from all over the world.”

Do you think the sense of tradition and community some people get from joining the military, you discovered through New England’s hardcore scene?
“In some ways – the community, the family, the history, absolutely. My father would go to reunions and the way that they would talk and laugh and keep in touch is really what I’ve done with people I’ve connected with in this world, and that’s really nice. Definitely the experiences and people we toured with in Have Heart, those are brothers of mine now. That was our rite of passage into this community. It’s really funny, when Have Heart were setting up dates in Southeast Asia, I was at dinner and said to my father, ‘Hey, we might do a tour of Vietnam.’ My father, while eating, just paused and went, ‘Yeah, I did one of those one time.’ That generational divide, the world that my father grew up in and the world I grew up in are insanely different.”

Has that been made more apparent since becoming a high school teacher yourself?
“Absolutely. I see everything in time and have a pretty deep appreciation for young minds and how hard it is to be a kid. I’m intensely trying to be more of an organiser and use my adult skills in touring to help young people out. Me and a friend in New Bedford are planning on booking one show each month at a venue, to create a scene and get more young people to play. The States doesn’t really give a shit about young people. It likes to say that it does, but it doesn’t. Its public school situation is a joke; you can look at the way they pay their teachers. So you’ve got to do those things yourself and the thing with hardcore and punk communities is it dies when the old people don’t leave the stage and leave enough room for the younger generation to get in there.”

Have you found yourself thinking about what lessons you would want to pass on to your own children?
“Man, I’ve got to write a record about that. Y’know, my mom told me that her and my dad would always just say, ‘We raised good kids.’ Not necessarily nice kids, but good kids. I’ve been given some crossroads in my life and of course I have regrets, but I’m grateful for having parents who promoted being a good person. Perhaps that’s too short-shifted, but I want my kid to be good! That’s all I can handle right now. Maybe ‘Good’ would be a good name for a record.”

Fiddlehead’s debut record Springtime And Blind is available now through Run For Cover. Have Heart will reunite for a short international tour this summer at the following dates:

Album review: Fiddlehead – Between The Richness

Fiddlehead frontman Patrick Flynn brings you the new bands you need to check out now, including Move, With War and Pacifist…