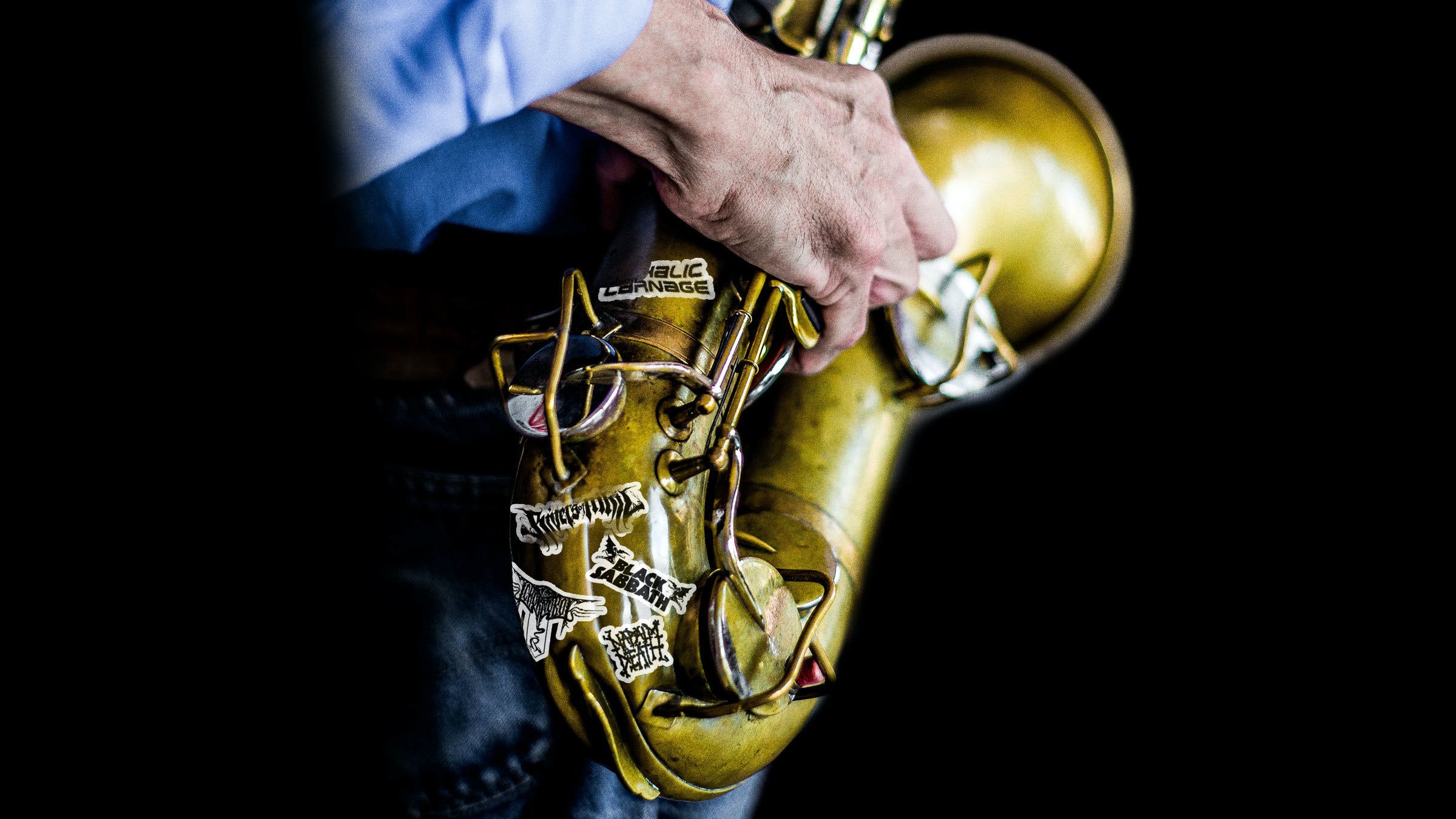 Metal has increasingly become about how extreme a band can be – how fast they play, how intense their songs are, how unsettling their mythos is – or so they’d lead the listener to believe. But metal’s also taken a leap into more unconventional musical extremes, whether it take the form of man-made robotic drone machines (Author & Punisher), black metal cut with harsh noise (Wold), to metal played with a hammer dulcimer (Botanist). But there’s one frontier few metal bands dare tread: the saxophone.

Admittedly, one could argue that saxophone has ruined countless songs in the ’70s and ’80s. From Icehouse to the Alf theme, the saxophone has a rap sheet that’s sometimes unforgivable. But it also worked surprisingly well with punk (X-Ray Spex, James Chance and the Contortions), so why not in the context of metal as well? Though sax in metal is relatively rare, this list of essentials was whittled down from several dozen, many of which feature some of the same familiar names (Bruce Lamont, Jørgen Munkeby). But whether played smooth or pushed to its most honkingly atonal, er, extreme, saxophone has proven that it does, indeed, belong in metal. Toot toot!

Ozzy-era Black Sabbath’s swan song, Never Say Die!, has for many years not been smiled upon kindly by fans, and frankly when you’re a band that’s released a string of albums as strong as Sabbath’s first six, you’re allowed a few blemishes. But Breakout, the album’s penultimate track, stands out for being so far outside their thunderous proto-metal wheelhouse – and yet it still works. More like a ’70s detective show theme than a proper heavy metal ripper, Breakout juxtaposes Tony Iommi’s guitar riffs against a bright burst of brass that climaxes in an over the top saxophone solo. It’s easy to see why this might not have sat well at the time, but in hindsight it’s a bright spot on an album that’s mostly hit or miss.

The degree to which Soundgarden is identifiably a 'metal' band is, perhaps, up for debate. What’s not is that Badmotorfinger was a Headbanger’s Ball staple and one of the heaviest albums of the ’90s – and one that had not one but two songs that featured saxophone. Drawing Flies had an appealing swing to it, but Room A Thousand Years Wide is one of the band’s strongest deep cuts, catchy yet colossal in its sound, with Scott Granlund (as well as trumpeter Ernst Long) going wild on a deliciously skronky saxophone solo toward the end. It’s Soundgarden at their most badass.

The nearly 16 minutes of Illinois post-metal band Minsk’s 2007 epic Ceremony Ek Stasis have so much going on that it seems almost reductive to put the focus on the inclusion of Bruce Lamont’s saxophone. There are billowing synthesisers, soaring riffs, thunderous low end, salsa rhythms and, yes, eventually saxophone. Its inclusion is tasteful, subtle, which isn’t something you can usually say about an instrument that often turned ’80s rock into instant cheese. But then again Bruce is an old pro at this, having made his mark on countless records as well as playing as a member of like-minded post-metallers Yakuza. His performance is somewhere between darkjazz and no wave, turning a giant slab of thunderous psychedelia even more mysterious and exotic.

Cephalic Carnage evolved from blistering grindcore to a more progressive form of technical death metal in the span of about a decade, but they reached a new level when they realised that saxophone could only improve their already expansive sound. Bruce Lamont, heavy metal saxophone MVP, lends his talents to their 2010 album Misled By Certainty, and the standout is this 12-minute titan. More than anything it’s a spectacular prog-rock song with some supremely heavy moments, with Bruce's performance lending a mournful quality to this otherwise epic journey.

Black metal legend Ihsahn made a name for himself as a pioneer of Norway’s infamous black metal scene, but he’s since grown as an artist and displayed more of an experimental and progressive streak in his music. And in the case of his 2010 album After, that has meant prominently featuring a saxophone in his intense, rhythmically complex and technical prog metal. Jørgen Munkeby of Shining forms a harmonic double helix with Ihsahn’s guitars on standout A Grave Inversed, the two instruments creating a chaotic, yet taut and contained storm of sound.

John Zorn’s no stranger to heavy, aggressive music. With bands such as Painkiller, God and Naked City, he pushed the limits of punk jazz to the point of being downright hostile. Which, of course, means his intensely squealing saxophone is a perfect fit for Napalm Death. Essentially, this pairing of artists on 2012’s Everyday Pox is a collision of extremes – free jazz on top of grindcore, piercing highs cutting through guttural lows. It’s aggression on an advanced level, all happening in the course of under two minutes.

Markov Soroka’s extreme metal epics as Tchornobog are colossal creations, demanding of both a listener’s patience and ability to expect the unexpected – trumpet, cello, piano and, yes, saxophone. The 14-minute Non-Existence’s Warmth combines a number of disparate elements in the service of a stunning slow-burner of a dirge, but around four minutes in when Sofia Hedman’s saxophone enters the frame, it’s an achingly gorgeous, oddly calming presence before the introduction of Markov's superhuman growls.

One of the most peculiar bands on this list, Ex Eye features members from within experimental rock and metal, including Liturgy / Uniform’s Greg Fox and Secret Chiefs 3’s Shahzad Ismaily, as well as outsiders like minimalist saxophonist and composer Colin Stetson. Where they come together is in the influence of avant-garde composers like Glenn Branca, as well as in the common pursuit of soaring technical ecstasy. This lengthy piece on the band’s self-titled debut puts Colin's saxophone at the forefront of a tense and triumphant exploration of metal, menace and math.

KEN Mode – This Is A Love Test

As Winnipeg’s KEN Mode have evolved into one of Canada’s most reliably brutal noise rock bands, they’ve also become markedly weirder. Their 2018 album Loved harboured a much darker, ominous tone than its predecessor, 2015’s Success, and as a result more brazenly defied expectations. Like, for instance, by including saxophonist Kathryn Kerr on a number of tracks, her textures on This Is A Love Test providing a tonal juxtaposition against Jesse Matthewson’s piercing guitar highs. Kathryn’s saxophone isn’t necessarily what you might call 'smooth', but there’s an exotic appeal about it that serves as a kind of red herring – by the time the chorus explodes, you won’t even know what hit you.

Rivers Of Nihil – The Silent Life

Rivers Of Nihil are the unique sort of death metal band who would not only incorporate saxophone into a song, but actually make a central part of an entire album, 2018’s Where Owls Know My Name. Soaring highlight The Silent Life is a stunning showcase of this unlikely hybrid, with ferocious technical death metal bursts line up against a more nuanced noir-jazz atmosphere, thanks to saxophonist Zach Strouse. On paper it seems like the kind of thing that shouldn’t work, but it does – brilliantly so.