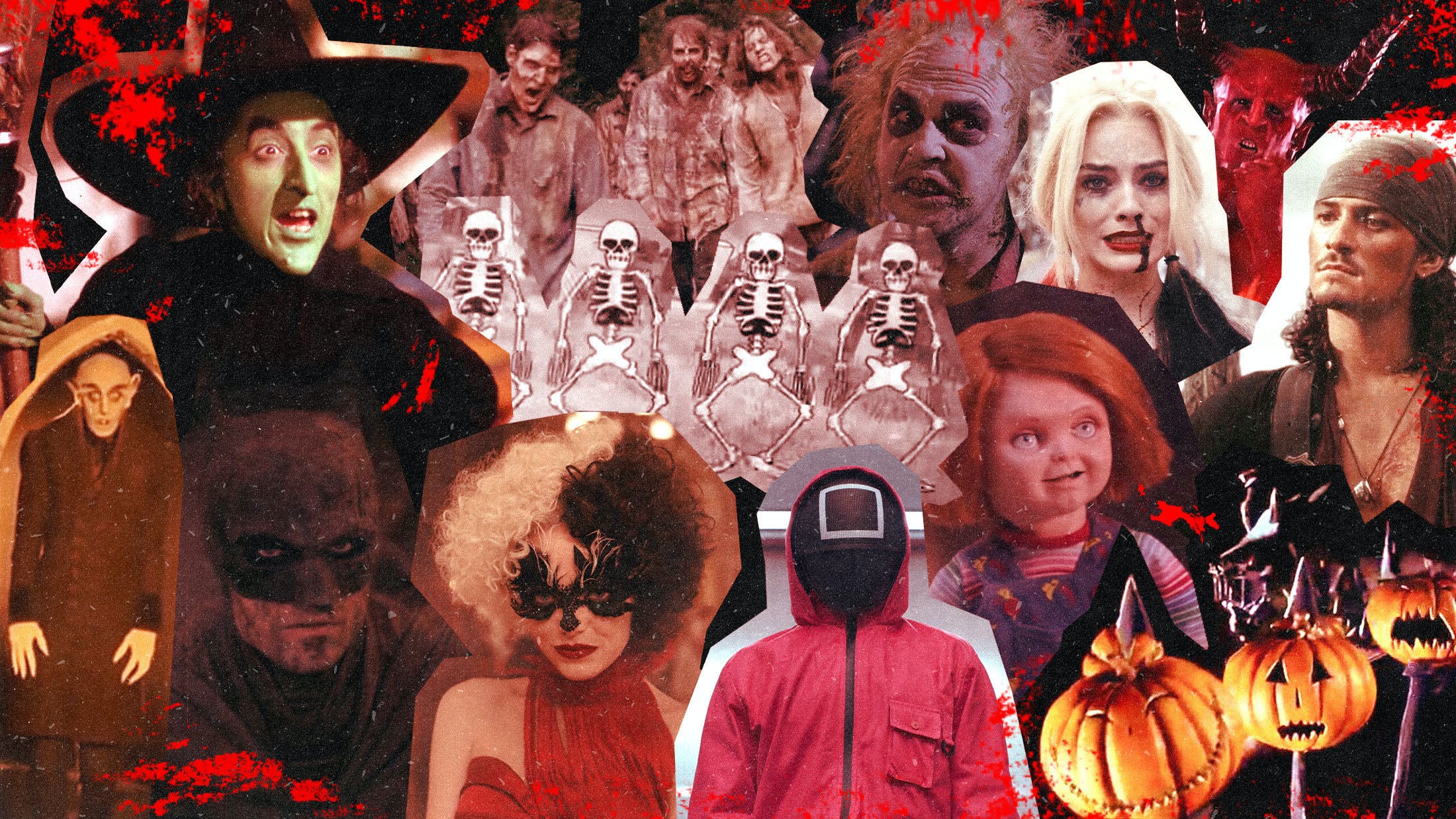 Halloween rules, clearly, but it’s hard to know what to dress up as. You don’t want to be dressed the same as everyone else, but you don’t want to spend your whole night explaining what you’re supposed to be. You want your costume to look great, but to not interfere with your body’s freedom to party. It’s complicated. If only you knew what the best thing to dress up as ever was.

The only possible way to determine this scientifically is with data. Google’s FrightGeist project has been keeping track of searches for costumes and compiled a list of, for some reason, the top 794.

This is vastly too many, but what we can do is get the top 32 (Witch, Rabbit, Dinosaur, Spider-Man, Cruella De Vil, Fairy, Harley Quinn, Cowboy, Clown, Chucky, Cheerleader, Pirate, Pumpkin, Angel, Vampire, Among Us, Zombie, 1980s, Superhero, Devil, Joker, Ninja, Squid Game, Beetlejuice, Doll, Batman, Bear, Ghost, Toy Story, Princess, Skeleton, Mermaid) and slap them into a world cup format.

That gives us this:

It’s immediately clear where some of the early casualties will be, but in a mere 31 clashes – a fitting number for Halloween – we’ll know the all-time greatest Halloween costume. Let’s go!

A tough one to start off with due to the overlap – capes, headgear with at least one point, etc. Batman is basically the greatest fictional character of all time, though, and the costume does a lot of that, so it has to be him really.

Squid Game isn’t a costume, it’s a show. Are people looking for the tracksuits (not scary), the helmets with PlayStation symbols on them (scary), a mask like the jewellery-faced guy (scary) or the giant animatronic girl (terrifying)? This ambiguity is very unhelpful. Whichever one they mean, the show just came out, so it’s super, super zeitgeisty, which isn’t always great – to anyone that hasn’t seen the show, it potentially looks like you just went to a fancy dress party in a tracksuit like a dumbass. However, the best way to be dressed like a ninja at a party is to not show up to the party – ninjas don’t hang out in plain sight – so the Netflix one edges it.

If you turn up to a party dressed as a dinosaur, fair play. There’s no way of half-assing that one, really. However, can the millions and millions of people that zombie-up every Halloween be wrong? It’s a perennial go-to for a reason – it’s so open-ended that it can be as high- or low-effort, as awful or attractive as you want, and there’s a lot to be said for versatility.

While the costumes were the best thing about the recent Cruella movie, a bear is a bear.

A fairy just feels a lot more Christmassy than Halloweeny. Plus, since The Suicide Squad sequel, the new animated series and Birds Of Prey, Harley Quinn’s costume has full bum coverage now, making it a lot less impractical than once it was.

The only way to really do a ghost costume is to do it wilfully crappily with a sheet over your head, and while that will get a laugh when you turn up, it’s very hard to have a fun night with a sheet on your head.

A cheerleader is a rubbish costume. A zombie cheerleader, sure. A murderous cheerleader, great, but otherwise a cheerleader’s uniform is basically a PE kit. A skeleton, though? Now we’re talking.

If by doll costume they mean dressing as a huge adult baby, great, that’s terrifying. But doing an image search for doll costumes, it’s the same sort of thing as a cheerleader, where the good ones are where they’ve gone all zombie-like and messed-up. Beetlejuice came out 33 years ago, which makes the fact that the costume is still in high demand incredibly impressive.

A rabbit costume is clearly for Easter. If you’re dressed as a rabbit for Halloween, you have lost your fucking mind.

Among Us vs. Vampire

The tricky thing with Among Us is, if you don’t know the game, the costume will look stupid as all hell. Even if you’re confident everyone where you’re going will totally know what you are, it’s not a practical party outfit by any stretch of the imagination. Vampires, meanwhile, have the same open-endedness of zombies – anything at all plus fangs equals a vampire.

It doesn’t even matter that Toy Story isn’t a costume. Clowns have to win this. While admittedly a Buzz Lightyear costume could totally rule, the great thing about dressing as a clown is, however scary or un-scary you try to be, you’re really scary. Like, a messed-up murdery clown is scary, but a happy wholesome clown is scary.

Princesses are scary, because a system that confers enormous wealth and status on an individual by dint of birth alone is a terrifying system. Given the nonexistence of magic, why should more value be placed arbitrarily on the offspring of one particular bloodline? What a hideous, horrifying way for things to be. Also, it’s hard to drink a beer while dressed as Spider-Man.

There was a point about 10 years ago, after The Dark Knight came out, where about one dude in three was dressed as the Heath Ledger Joker. There are dudes trying to take us back to that point with the Joaquin Phoenix one. Let’s not. Let’s dress as pumpkins, it’s more fun.

‘Superhero’ is incredibly vague. There are good superhero costumes and absolutely shit ones. If you show up to a party with forks glued to your hands claiming to be Wolverine, go for it. It’s hardly Satan, though, is it?

You can’t dress as a decade. It’s not a costume is it? ‘I’ve come as a 1980s person.’ Grow up, that’s absolutely rubbish. Are pirate costumes better? Yes, they arrrrrrrr.

With 16 costumes eliminated, several because they don’t make any sense, it’s time for round two.

There’s a lot to be said for a bear costume – an adult dressed as a bear is really, really funny – but it’s unlikely to be particularly scary, is likely to be an off-the-peg one that doesn’t show a huge amount of creativity, and is likely to be horrendously warm. It just feels like, as a zombie, you can sort of do anything.

The thing with a cowboy – or cowperson – outfit is, it’s really easy to get the hat size wrong. A too-large hat makes it look like you’re wearing your dad’s clothes; a too-small hat and you look like a zoomed-in toddler. Harley Quinn feels in many ways like a character created specifically for Halloween, and that has to count for something.

Both extremely strong. It feels like a shame these two have met as early as they have, as both are fine contenders. A skeleton is just, like, as Halloweeny as it gets, though. In Child’s Play 2 you see Chucky’s skull, but a skeleton doesn’t have a Chucky inside it.

Squid Game just came out, and while it’s done incredibly well, it’s hard to know how long it will really stick in the public consciousness. In a few years’ time, looking at old Halloween pictures, do you want to have to rack your brains for ages trying to remember what that show was called that inspired you to destroy a speaker turning it into a mask with a big triangle on it, or do you want to go, ‘God damn, I made a great Batman’?

Another tough one. It’s near-impossible to do a good tail on a mermaid costume, so a lot of off-the-peg mermaid costumes are basically a shiny top and a long shiny skirt with a bright wig. That said, a Beetlejuice costume is basically a stripy suit paired with a green wig, so at least the mermaid allows for a bit more creativity. Plus we already have one character played by Michael Keaton in a late-1980s Tim Burton film in the quarter-finals.

Shiiiiiiiiiit. This could easily have been the final, especially when you realise some of the rubbish ones that have made it this far. Looking at it from a Kerrang! perspective, on one side you have Shawn Crahan and Insane Clown Posse, while on the other you have an aesthetic about one in five metal bands go for, which probably edges it. Plus blood, loads of blood.

Class war or no class war, a princess isn’t the right kind of scary. Nor is a pumpkin, but it’s Halloweeny at least.

Stick with us on this: the Devil might be a much bigger deal in metal, but it’s a shit costume. Unless you go the full Tim-Curry-in-Legend it’s basically some horns. That’s rubbish. You can do a lot with a pirate, though – as gory and disgusting or (with some historical revisionism) needlessly sexy as you want.

With some big names defeated and some surprising stinkers miraculously clinging on, it’s time to head into the quarter-finals.

As great as the Caped Crusader is, a zombie is about as Halloween as it gets. It’s an equal-opportunity costume where, as long as you smear some shit on your face and rip your clothes a bit, you’re laughing. Sorry, Batman.

Halloween feels at its most Halloweeny when it uses archetypes rather than ultra-specific pop-culture references, and there’s nothing more timeless than a skeleton. You could go anywhere on Earth dressed as a skeleton and people would know exactly what you were, while explaining Harley Quinn to people who’ve never even heard of Batman: The Animated Series would take fucking ages.

Honestly, it’s a Halloween miracle that mermaid made it this far.

Pumpkins are the symbol of Halloween, but as something to dress up as goes, they’re not great. The shape of a pumpkin and the shape of a person are so fundamentally different that a costume has to be either rubbish or impractical. There’s basically no way of a non-crap pumpkin costume also being danceable-in.

As the semi-finals approach, it’s an all-archetype, open-to-all face-off with no licensed characters or specifically-gendered costumes remaining…

Now we’re cooking with gas. Two heavy hitters here that could show up at any point in history and terrify the shit out of everyone. There’s an argument to be made that they are just two points on a continuum, though – isn’t a zombie pretty much just an unripe skeleton?

The thing with vampires is, beyond fangs, what do they really have? There are specific pop-culture vampires that make good costumes, but a generic vampire is pretty much a pair of teeth. A pirate, though, is accessory city, plus comes with an accent.

Skeletons are so cool that pirates wave flags and wear hats with pictures of skeletons on them. Skeletons win. Well done, you scary bony bastards!