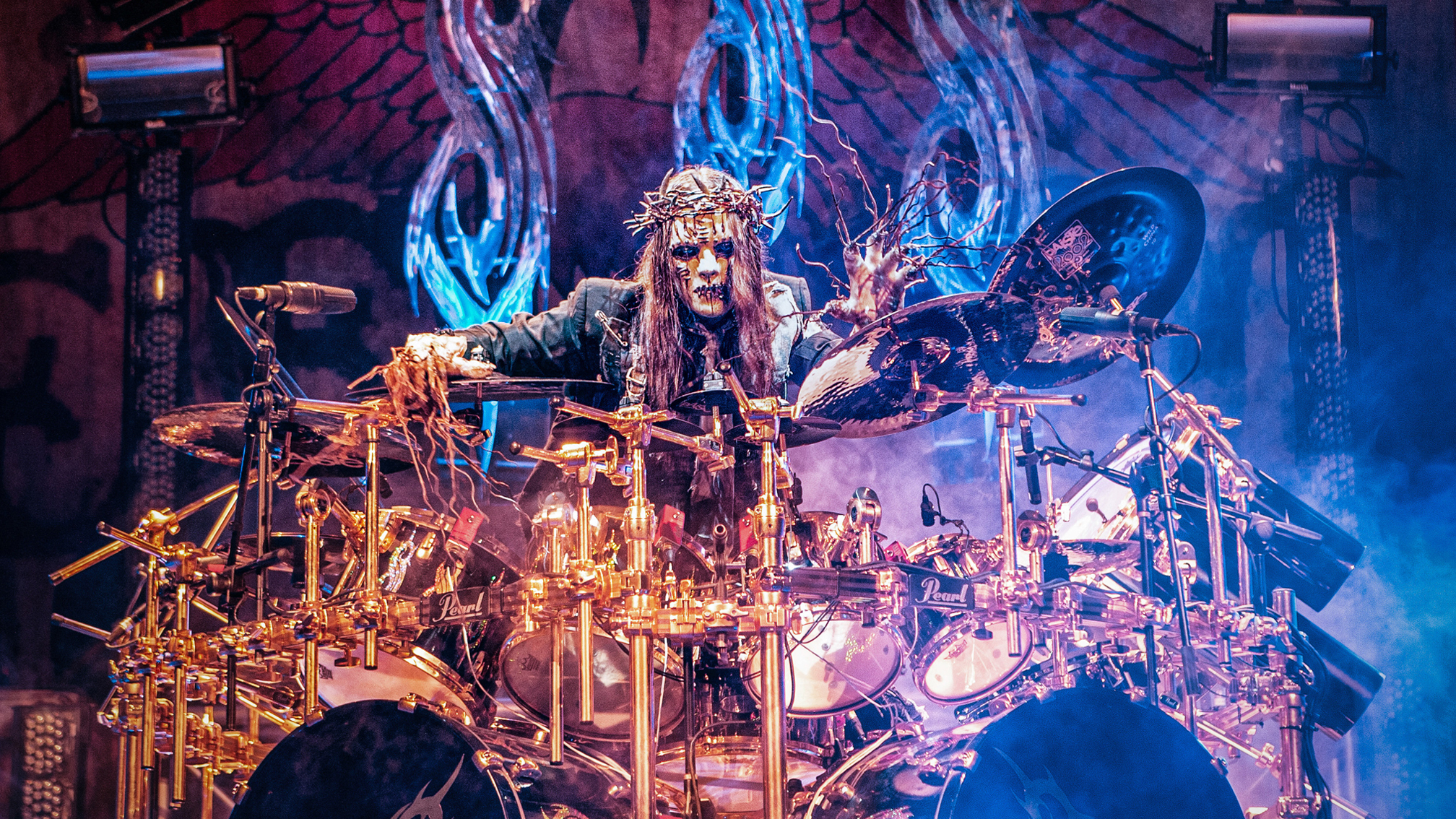 On July 26, 2021, music lost a player the like of which had never been seen before. As a founding member of Slipknot, Joey Jordison was responsible for kickstarting one of the defining heavy bands of his generation, and for shunting truly extreme music into the mainstream. For a generation of fans, his dizzying virtuosity behind the drum kit was an inspiration to pick up an instrument themselves, or the first breadcrumb in a trail that would lead down sub-genre rabbit holes that could truly blow the mind. All the while, he remained a superfan himself, in awe at the opportunities that had opened to him, still thankful and hungry to perform even after the setbacks of his later years.

Of course, any chronicle of Joey’s greatest moments will lean heavily on the 18-legged Iowan metal machine. Who will ever forget the first time they had their eardrums invaded by Surfacing, bearing witness to the carnage as its spilled into arenas on the Iowa world tour, or feeling the triumphant chills as the band finally ascended to headline Castle Donington’s hallowed main stage in 2009? Away from Slipknot, however, there have been a wealth of side-projects, substitute spots and collaborations with heavyweight peers to keep jaws dropped. Hell, we’ve not even found space to include industrial outfit Vimic or his time with Norwegian black’n’roll supremos Satyricon and the hellbilly himself Rob Zombie in this run-down.

Each of the 13 performances below, though, were moments in time when Joey indisputably reminded us why he was the best of the best. They – and the man behind them – will live on forever in our hearts and minds.

When Slipknot first travelled to Los Angeles off the back of 1996’s Mate. Feed. Kill. Repeat. demo, legend has it that some stuck-up locals dragged them about being country boys who’d blown into the big city. Supposedly, Surfacing was the song they played to show quite how crazy shit could get out amongst Iowa’s endless cornfields. It did the same on a much wider scale when it dropped as the fifth track on 1999’s self-titled debut LP. Joey’s cagey cymbals and nervy quick-fire fills over the ominous intro and the track’s interludes proved his atmospheric instinct, before he fully unleashed a bludgeon that more than matched Corey Taylor’s war-cry to ‘Fuck it all!’

There’s one of those Danny DeVito It’s Always Sunny… memes doing the rounds online. “Joey Jordison when writing People = Shit” reads the bold top text. Beneath it, Danny pointing two guns into the screen and that infamous quote: “So anyway, I started blasting.” No kidding. While that self-titled debut had been coloured to an extent by the broad strokes of the lingering nu-metal movement, Iowa saw Slipknot move all the way into unhinged extreme metal. The introduction of blastbeats was integral to that, but even in the track’s opening 30 seconds, we get some incredible fills and pummelling double-kick passages as well. Proof, as part of this epic misanthrope anthem, that as much as words can hurt, drumsticks and pedals can, too.

If the self-contained sounds of Iowa weren’t terrifying enough to hankie-wringing parents around the world, seeing its authors take up residence in some of the planet’s biggest venues certainly did the trick. Although they played six arenas in mainland Britain on their late-winter 2002 headline run (including a Valentine’s Day massacre in Glasgow), it was February 16’s show at London’s 12,000-cap Docklands Arena where Slipknot etched their names into infamy, with a full camera crew brought onboard to produce the subsequent Disasterpieces live recording. The kit-mounted Joey-Cam showcased an utterly tireless performance.

It was a seemingly forgotten fact in 2002, that before he took up residence behind the kit with Slipknot, Joey had a brief spell on guitar for Des Moines punk-rock outfit The Rejects. Fans were awestruck when the player who’d won a reputation as the most head-spinning percussionist in heavy music went back to the six-string for glam-inflected horror-punks Murderdolls alongside Frankenstein Drag Queens From Planet 13 vocalist Wednesday 13. Many fans will remember the cover of Billy Idol classic White Wedding which went on hard repeat across music TV at the time, but we’re going with Beyond The Valley Of The Murderdolls’ lead single Dead In Hollywood: proof that Joey’s songwriting and swagger extended beyond the unhinged mania of his main band.

Having simultaneously pushed into more extreme territory while cracking the mainstream with their last release, fans really didn’t know what to expect from Slipknot LP number three. Having released pent up pressure with side projects like Stone Sour (and the aforementioned Murderdolls), the band were in a good place to head into The Mansion in Los Angeles with super-producer Rick Rubin, and came out with an album that enhanced their arena-dwelling credentials while inhabiting the same lunatic fringe as before. Three Nil is that records’s defiant riposte to detractors who’d suggested Slipknot might’ve lost their edge, with Joey’s gloriously layered-up percussion the foundation for a gleefully chaotic construction.

Filling in for Metallica at Download Festival (Castle Donington, 2004)

We still don’t know what exactly happened to motormouth Metallica sticksman Lars Ulrich in the lead-up to their Donington main stage headline on June 6, 2004. Hours before the San Francisco titans were due on, rumours swirled that the great Dane had been taken to hospital following an “episode” and that the show might need to be cancelled. Instead, Metallica played their first (and still only) show without Lars behind the kit, holding impromptu auditions and bringing a dream team on board. As great as Slayer legend Dave Lombardo and Lars’ own drum tech Flemming Larsen were, though, Joey was the stand-out, powering through and adding his own signature to For Whom The Bell Tolls, Creeping Death and Seek & Destroy, before returning for the closing salvo of Sad But True, Nothing Else Matters and Enter Sandman. Downright heroic stuff.

Annihilation By The Hands Of God (Roadrunner United, The All-Star Sessions, 2005)

One of the most legendary record labels in the history of heavy music, Roadrunner Records pulled out all the stops to celebrate its 25th birthday back in 2005. Tellingly, Joey was the representative from Slipknot selected as one of four “team captains” – alongside Machine Head and Trivium frontmen Robb Flynn and Matt Heafy, and Fear Factory guitarist Dino Cazares – to wrangle the sprawling Roadrunner United collaboration into existence. The drummer performed on five of the 18 tracks recorded for The All-Star Sessions LP and at the one-off showcase on December 15, 2005 in New York. Our pick is the crushing Annihilation By The Hands Of God, where he more than holds his own alongside demonic Deicide singer Glen Benton and legendary Death / Obituary / Testament guitarist James Murphy.

If one band could make life in Slipknot look tame in the mid-2000s, it was doubtless Al Jourgensen’s industrial metal icons Ministry. With that Chicago nightmare factory at arguably its most metallic point on thrashy 2006 classic Rio Grande Blood, weird Al brought Joey, Prong guitarist Tommy Victor and Killing Joke bassist Paul Raven aboard to ensure the live shows could match the ballast he’d conjured on record. A whole summer of carnage ensued, but no show was more ferocious than that at Germany’s Wacken. Taking the festival's main stage at half past midnight and hammering on under solid red light until almost 2am, it felt like a living nightmare for those of us lucky enough to have found ourselves in the front-row fray – in the best possible way.

As the gaps in the Slipknot touring schedule began to widen in the latter part of the 2000s, Joey also found the freedom to get involved with Slipknot’s one-time nu-metal rivals Korn. The Bakersfield boys needed the lift, in fairness. With guitarist Brian ‘Head’ Welch quitting the band in light of his born-again Christianity, and drummer David Silveria dropping out “on hiatus”, some fans had begun to worry that things might be falling apart. Getting behind the kit for the U.S. Family Values tour and a smattering of European festival dates, Joey helped get things back on track, with his part in an earthquaking performance at Germany’s Rock Am Ring 2007 still echoing today.

Psychosocial (Slipknot, All Hope Is Gone, 2008)

With elements of chunky groove metal and trippy psychedelia bleeding into the sound, and a sense of bleak uncertainty in most of its 12 tracks, it felt like Slipknot were at a crossroads on 2008’s fourth LP All Hope Is Gone. Although it was one they would ultimately move on from without Joey (or bassist Paul Gray, who passed in 2010), the drummer left his mark throughout. Massive lead single Psychosocial mightn’t have been his most intricate percussive showcase, but the route-one simplicity – all tantalising rolls and sledgehammer smash, alongside that juddering breakdown – proved his understanding of what it would take to see the band he started dominate airwaves and festival main stages around the globe.

Partially thanks to Psychosocial’s runaway success, The Nine were invited to celebrate 10 years of their incendiary debut with a Donington headline set on June 13, 2009. With a colossal Saturday night crowd willing them on, they spectacularly raised hell across an epic 17-song set, from skull-smashing opener (sic) to gloriously deranged closer Spit It Out. Joey’s iconic hydraulic spinning rig was in full flight during the final minutes, capping a decade-and-a-half-long journey from the Iowan backstreets to top billing on metal’s greatest stage. Joey would headline Download once more with Slipknot – in 2013 – but this was the only time he would manage the feat alongside all of the originals.

Although Joey was still very much part of Slipknot at the time of recording and the October 2013 release for Scar The Martyr’s self-titled debut LP, many fans understandably associate it with his first steps forward after having been cut loose in December of the same year. Writing most of the record himself, and recording virtually all of the percussion, bass and rhythm guitar, it perhaps indicated unfulfilled creative needs, and stands as a monument to his underrated instrumental dexterity. There were valid criticisms that many of the songs too easily invited unfavourable comparison with latter-day Slipknot output, but epic, near-seven-minute lead single Blood Host felt like a legitimate expansion: Joey’s multi-instrumental contributions building into a dense, tumultuous whole.

Remarkably, Joey’s heaviest-ever outfit was arguably his last. Joining forces with ex-DragonForce guitarist / bassist Frédéric Leclercq, fellow French six-stringer Stéphane Buriez, Seth bassist Heimoth, and co-vocalists Sean Zatorsky (of Dååth) and Attila Csihar (of Mayhem), Sinsaenum’s blackened-death mightn’t have had the hanging-by-a-thread sense of instability that marked the best of Slipknot, but it was darker and more direct. A prolific collective, they dropped two albums and three EPs between 2016 and 2018, and we’ve gone with the wildly tempo-traversing title-track from second album Repulsion For Humanity as Joey’s stand-out showing. From manic gallop to swampy thump, it somehow showcased new sides – more than two decades down the line – to this generation’s greatest drummer. A brutal way to wave goodbye.