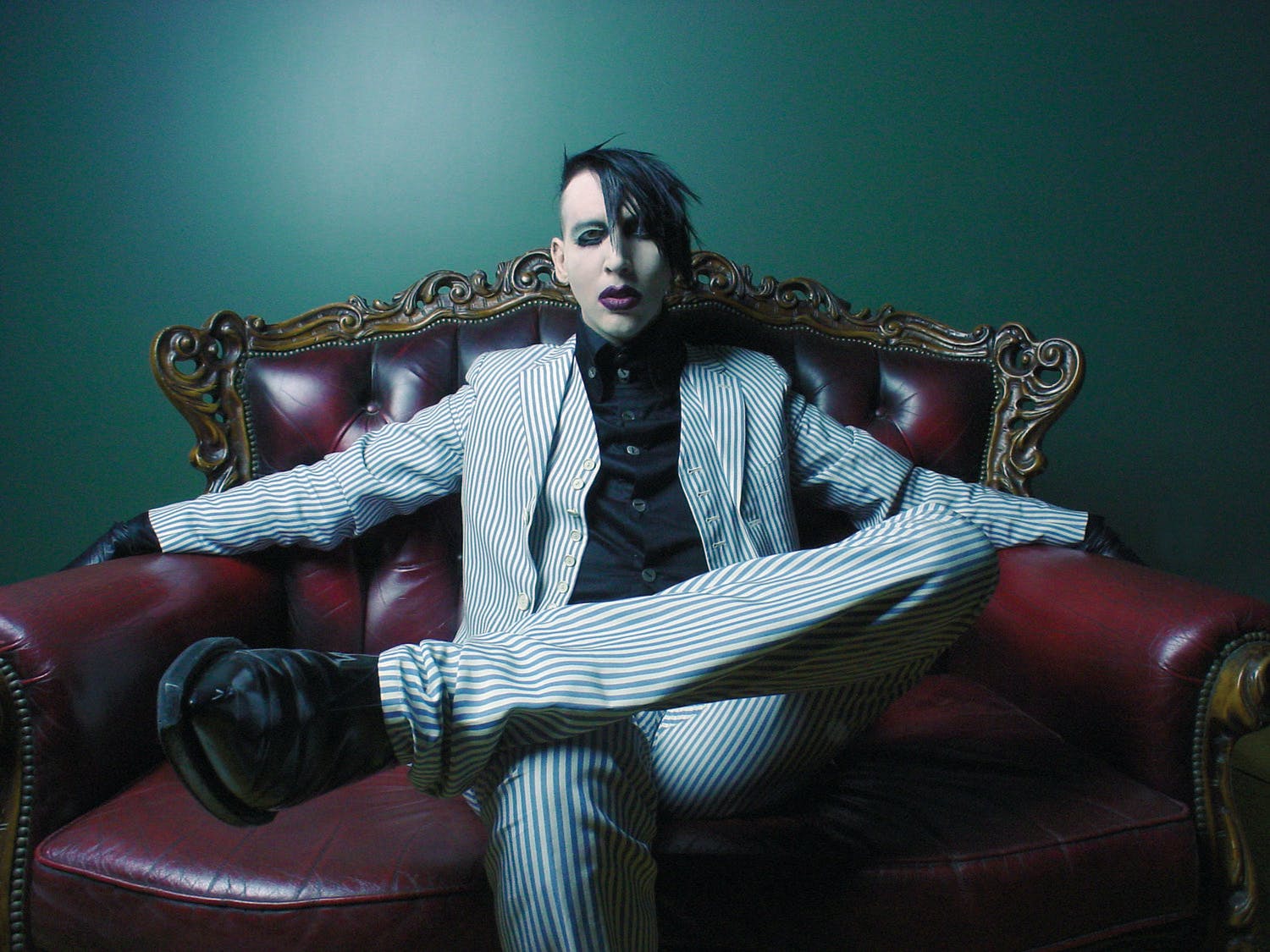 The first time I heard Mechanical Animals, I was at my friend James’ house. His parents were away and were drunk on beer and sherry, raided from his folks’ liquor cabinet. I was already a passive Marilyn Manson fan, thanks mainly to the cover of Sweet Dreams (Are Made of This) and was morbidly intrigued by Antichrist Superstar, if not wholly convinced by it. Unlike James, who loved it so much that he’d bought Mechanical Animals the day it was released and he kept raving about.

And so it wasn’t long after that we were drinking to get drunk – as you do at 17 – and listening to this new Marilyn Manson album. I remember so vividly the moment the first notes of Great Big White World came through the speakers and my mind just being absolutely blown. It wasn’t what I expected in the slightest. Sure, it sounded like Marilyn Manson – mainly because of his voice – but at the same time it sounded nothing like him. This was a song from another planet, music that truly sounded otherworldly, as opposed to something made by a rock band full of humans.

Even the few harder, faster songs which had remnants of the industrial metal of Antichrist Superstar - Rock Is Dead (which could easily be off Antichrist Superstar), I Want To Disappear, New Model No. 15 – are encased in this glossy, space-age sheen, something which marks them out as part of this specific Marilyn Manson album, rather than just being Marilyn Manson songs.

Some of that is inextricably linked to the concept of the record. A David Bowie/Ziggy Stardust-esque exploration of characters, there’s an “alien messiah” called Omēga – who fell to Earth and was captured and forced into becoming a rockstar product with a band called The Mechanical Animals – and another character called Alpha that, by all accounts, is based on Manson himself at the end of the Antichrist Superstar era.

Not that you need to know any of that to appreciate these songs or understand the themes that course through the album – neither James or I were aware of any concept at the time, nor any reason for the shift in musical direction except for the fact that’s what bands do sometimes.

Either way, and even without knowledge of that vague narrative, it’s impossible to not be aware of – to not feel, to not be inhabited by – the truly abject sense of loneliness and alienation. From beginning to end, it shrouds this record in a cold cloak of despair and despondency, dehumanizing the most basic of human emotions which, both ironically and understandably, makes them all the more poignant. Yes – poignant. Who would have thought that a Marilyn Manson record could have so many moments of vulnerability and fragility? Mechanical Animals has an abundance of them and they accumulate as the record progresses to paint a vivid and disturbing picture of both a world and a heart in collapse.These things exist both separately and in tandem to create a compelling duality of existential anguish and wretched heartbreak that tell different stories at the same time. Take, for instance, The Speed Of Pain – the gloomy, glowering centerpiece of the album. Anyone who’s ever experienced the crushing hollows of a break-up will recognise themselves in its slow lament – both in terms of the desperate ache that propels it and the refusal to take responsibility for this emotional Armageddon. It moves from vicious bitterness (‘Just remember when you think you’re free / The crack inside your fucking heart is me’) to outright pain and disavowal (‘I wish I could sleep but I can't lay on my back / Because there's a knife for every day that I've known you’) – two very natural stages of emotion that come with a broken heart.

But then, as the song reaches its soaring crescendo, it transcends that situation with one simple final Iine: ‘I hope at least we die holding hands for always.’ In an instant, the environment has been transformed completely – it’s no longer two former lovers pitted against each other, but two former lovers pitted against the terrors and the horrors of the world, reunited with a bigger purpose, despite the fact that it all went to shit. Because, in the grand scheme of things, that relationship was a speck of dust in an old abandoned house, and while that love may be gone, the fact it existed at all is worth remembering. That’s something that occurs frequently on this record, conflating the huge with the miniscule, personal relationships with the state of the world. Take the chorus of the title track (‘I am never going to be the one for you / I am never going to save the world from you’), or the simultaneous and inevitable demise of both love and life on the apocalyptic The Last Day On Earth (‘I know it's the last day on Earth / We'll be together while the planet dies’). There’s romanticism there, but you don’t have to dig too deep to understand the nihilism is, ultimately, overpowering – that the weight of both the world and life (and the inevitable end of both those things) is always going to be too much and will always win out.Given the heavy emotional and existential trauma of these songs, it’s unsurprising that the characters within them are looking for ways to ease, numb or obliterate the pain through substances. The hedonistic glam stomp of The Dope Show and the seedy, spiritual soul swagger of I Don’t Like The Drugs (But The Drugs Like Me) offer up the most bravado, but there’s a dark emptiness lurking just beneath the surface of both. Even the meaningless sex of User Friendly (‘I'm not in love, but I'm gonna fuck you ’til somebody better comes along’) is cursed.

It sounds detached and emotionless, cold and indifferent, but between the lines, a harrowing truth can easily be read – that not even any of the things that give us pleasure in the infinitesimally short time we’re alive actually mean anything. That’s confirmed by the next song, Fundamentally Loathsome: ‘And I am resigned to this wicked fucking world on its way to Hell / The living are dead and I hope to join them, too. I know what to do and I do it well.’ In other words, we’re all fucked, so why even bother trying? The sad shimmer of final track Coma White makes it clear that even if we try to forget our place in the universe, it won’t work: ‘A pill to make you numb, a pill to make you dumb / A pill to make you anybody else / But all the drugs in this world / Won’t save her from herself.’

Ultimately, what makes this record so powerful is how deftly it pits the meaninglessness of life against the enormity of the universe. It’s not just enough that we are fucked and fallen, flawed and failed, in our own microcosms. Yes, that’s bad enough, sure, but that we also need to be aware that we are also so much less than that, and, despite all we can do to try, we will never be able to escape that fact. As Manson sings on Disassociative: ‘I can never get out of here / I don't want to just float in fear / A dead astronaut in space.’ Whether you see this album as a dystopian reflection of the modern world – one that seems even more accurate two decades later, no less – a rumination on the wonder and worthlessness of love, a simple warning against doing too many drugs or something in between, the one thing it always is is a reminder that we are forever trapped and constrained by our own insignificance and mortality. We are all dead astronauts in space – and we always will be. Of course, I didn’t get all this on that first listen, but it was all there, waiting to be discovered, little by little, bit by bit, as the years pulled the two of us – and everybody else alive on this planet - deeper into our own black holes.