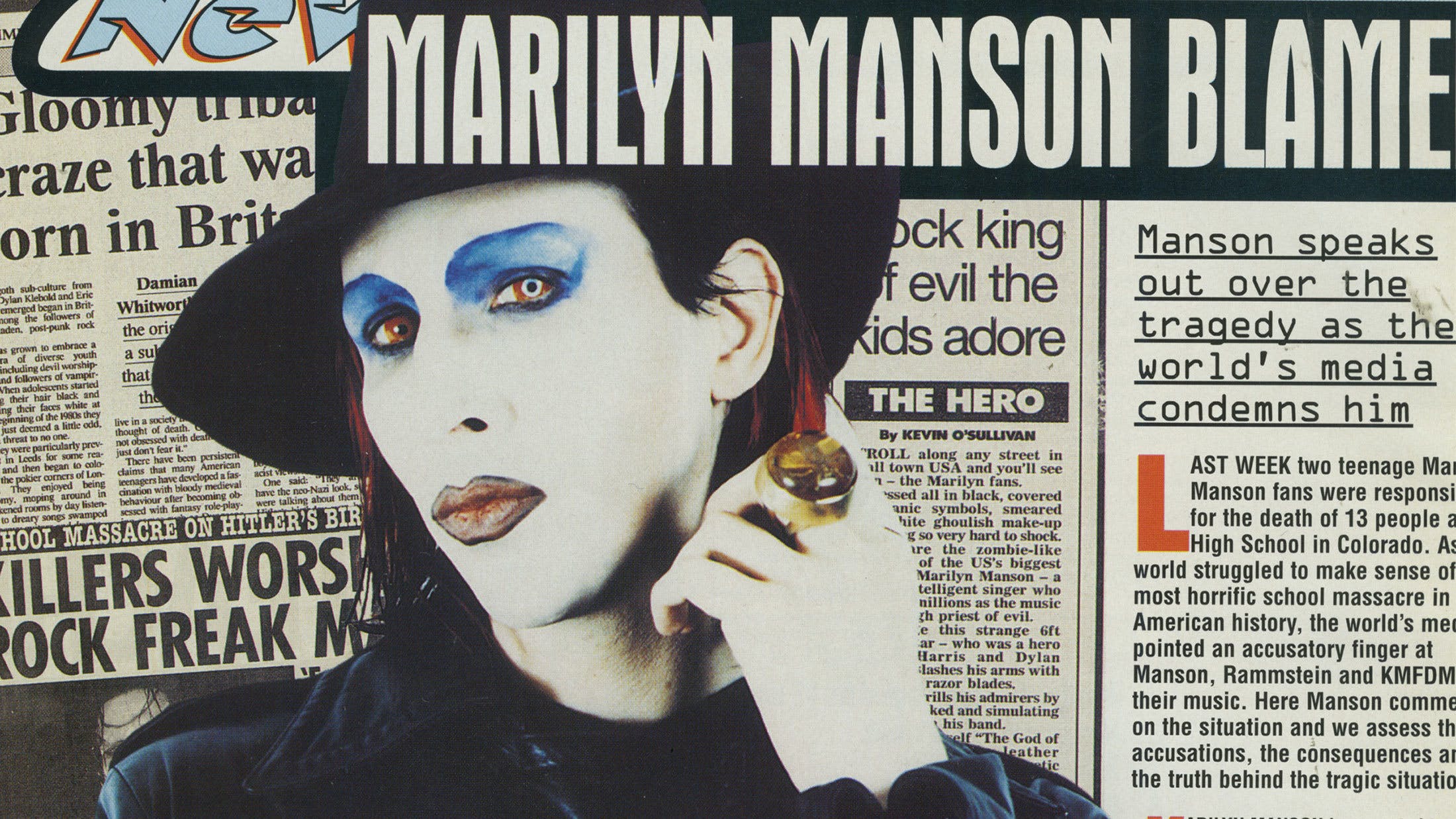 Eric Harris was meticulous about maintaining journals, notebooks and blogs, filling them with his musings, reflections on the past and plans for the future. The 18-year-old hadn’t always found life easy since his family had relocated to Colorado after his Air Force pilot father retired from military service. But, despite his arrest in January 1998 for stealing computers from a locked van, there were signs that the young man was turning his life around.

Harris’ probation officer had hailed the teenager as “a very bright individual who is likely to succeed in life” and his family were delighted when he applied to join the United States Marine Corps. No-one then had stumbled upon the journal entries in which Harris outlined in forensic detail his plot to murder almost everyone at his high school.

That plan was first sketched out in his journal entry for April 26, 1998. The following April, Harris promised, he and his friend Dylan Klebold aimed to “kick natural selection up a few notches” by detonating “fire bombs, chlorine gas bombs and smoke bombs” at Columbine High School. The pair intended to set off homemade explosives in the school’s cafeteria at peak lunch hour, then shoot, stab and bomb any survivors. In anticipation of the emergency services arriving, devices hidden in the boys’ cars in the school parking lots would be primed to explode, causing further devastation.

“It’ll be like the LA riots, the Oklahoma bombing, WWII, Vietnam, [video games] Duke [Nukem] and Doom all mixed together,” Harris wrote. “I want to leave a lasting impression on the world.”

Shortly after 11am on the morning of April 20, 1999, Harris and Klebold set their plan in motion. When the bombs placed in the lunch hall failed to explode, the two teenagers calmly walked through the school, firing indiscriminately at students and staff. Within an hour, they had murdered 12 students and one teacher, and injured 24 others. At approximately 12:08, the two boys turned their guns on themselves, their suicides ending what was, at that point, the deadliest school shooting in American history.

READ THIS: The ever-changing faces of Marilyn Manson

In the aftermath of the tragedy, wild speculation circulated as to possible motivations for Harris and Klebold’s murderous spree. Within 24 hours, the two teenagers were labelled as outcast goths and members of a gang dubbed the ‘Trench Coat Mafia’. Their actions, it was claimed, were a bloody revenge upon the high school ‘jocks’ who bullied and taunted them. Other reports claimed the pair were Satanists, or white supremacists, choosing the date of the attack to mark Adolf Hitler’s birthday. None of this, it later transpired, was true. But as the media sought to make sense of the violence, one hysterical theory gained traction: after erroneous claims that the pair were wearing his T-shirts on the day, it was claimed that Harris and Klebold were inspired to kill by the music of Marilyn Manson.

‘Killers Worshipped Rock Freak Manson’ declared The Sun newspaper. ‘Nutters Loved Evil Pop Hero’ stated The Daily Star. Even the more sober ’broadsheet’ press latched on to the idea. Claiming that Harris and Klebold were also fans of industrial outfits KMFDM, Rammstein and Nine Inch Nails, the Guardian posed the question ‘Did goth culture turn two teenagers into killers?’ while The Times ran a profile of Manson under the headline ‘Cult Following Of Rock Star Who Aped Serial Killer’. “No-one’s saying it’s Marilyn Manson’s fault,” wrote journalist Elizabeth Judge, acknowledging that the singer was being unfairly targeted, “but people need to know who he is.”

“As you may know,” the letter read, “several news reports have indicated that the young killers often quoted and mimicked one of your artists, Marilyn Manson – as did the young murderers in several other student rampages that occurred last year. Manson’s songs glorify death and human destruction – and his lyrics seem to eerily reflect the carnage of the recent rampage. Out of respect towards the 13 innocent victims of Colorado… we ask you to strongly reconsider which lyrics the Seagrams corporation chooses to legitimise and popularise.”

Manson’s own reaction to the tragedy was more measured and dignified. “I’ve been asked to comment on the Colorado school tragedy,” his initial statement ran. “It’s tragic and disgusting any time young people’s lives are taken in an act of senseless violence. My condolences go out to the students and their families.” With the focus on the singer intensifying, on April 28, Manson chose to postpone five dates on his scheduled U.S. tour. “People are trying to deal with their losses,” he stated. “It’s not a great atmosphere to be out playing rock’n’roll shows, for us or the fans.

“The media has unfairly scapegoated the music industry and so-called goth kids and has speculated – with no basis in truth – that artists like myself are in some way to blame. This tragedy was a product of ignorance, hatred and an access to guns. I hope the media’s irresponsible finger-pointing doesn’t create more discrimination against kids who look different.”

In the week following the killings, Kerrang! placed Manson on the front of its May 1 issue, under the headline ‘Don’t blame me!’ Noting that rock music had been placed ‘in the dock’ at various points over the past decades – from AC/DC being accused of inspiring serial killer Richard Ramirez to Metallica being referenced by prosecutors in the 1994 trials of the ‘West Memphis Three’ – the article featured thoughtful comments from Judas Priest guitarist Glenn Tipton, whose own band had been accused of inciting two Nevada teenagers to engage in a suicide pact in 1985.

“With many bands using violent imagery, it’s easy for people to pin the blame on metal music,” Tipton stated. “A tragedy like this is every parent’s nightmare. But to blame it on music is ludicrous and dangerous.”

Manson himself chose to wait until the following month to comment at length on the tragedy. He did so in an incisive, self-penned article in Rolling Stone magazine, headed ‘Columbine: Whose Fault Is it?’, which pulled no punches.

“When it comes down to who’s to blame for the high school murders in Littleton, Colorado, throw a rock and you’ll hit someone who’s guilty,” the singer wrote. “Man’s greatest fear is chaos. It was unthinkable that these kids did not have a simple black-and-white reason for their actions. And so a scapegoat was needed… From Jesse James to Charles Manson, the media, since their inception, have turned criminals into folk heroes,” Manson pointed out. “They just created two new ones when they plastered those dip-shits Dylan Klebold and Eric Harris’ pictures on the front of every newspaper. Don’t be surprised if every kid who gets pushed around has two new idols.”

He added, “This kind of controversy does not help me sell records or tickets, and I wouldn’t want it to. I’m a controversial artist, one who dares to have an opinion and bothers to create music and videos that challenge people’s ideas in a world that is watered-down and hollow. In my work I examine the America we live in, and I’ve always tried to show people that the devil we blame our atrocities on is really just each one of us.”

Manson wasn’t the only artist to be drawn into the moral panic. Dylan Klebold’s daily planners referenced several Nine Inch Nails songs – Piggy, Hurt, The Downward Spiral and Happiness In Slavery among them – while one of Harris’ journal entries expressed a desire to “trick” a prospective conquest into bed, referencing NIN’s Closer: “I can sweep someone off their feet, tell them what they want to hear, be all nice and sweet, and then ‘fuck ’em like an animal, feel them from the inside’ as [Trent] Reznor said.” When a journalist from [now defunct] British music magazine Select mentioned the tragedy to Reznor in 1999, in an article insensitively headlined ‘Columbine Harvester’, NIN’s mastermind was dismissive of the links between art and violence, stating, “Society can’t treat people like sheep.”

“I don’t feel that I’m irresponsible,” Reznor added. “But if I wrote a song that directly said ‘kill yourself, kill your friends’ and someone had killed themselves listening to it, I would feel terrible.”

In July 1999, speaking to Kerrang!, Marilyn Manson acknowledged that the fall-out from Columbine had taken its toll on a personal level. “It was very different from the Antichrist Superstar period, where having the whole world against you felt good. For me, personally, it was very tough. But in the end I feel like I’m more inspired than ever to make the new album.”

Billed as a “declaration of war”, that album, 2000’s Holy Wood (In The Shadow Of The Valley Of Death), remains the single most brilliant piece of work of Manson’s storied career, with scathing singles Disposable Teens, The Fight Song and The Nobodies undeniably influenced by the horrific events in Colorado the previous year. Asked by Kerrang! to rank his albums, the singer selected Holy Wood… as his definitive work, saying, “This is the most important record, in my heart, maybe because it came straight after Columbine. It’s not my most personal or confessional record, but maybe in some ways it is because I was talking about all the things in my head.”

In 2001, Manson played his first gig in Denver in the wake of the tragedy, as part of Ozzfest: he later stated that he received “hundreds” of death threats ahead of his performance. Before the show, the singer was interviewed by filmmaker and activist Michael Moore, for a segment in what became the 2002 documentary Bowling For Columbine. “If you were to talk directly to the kids at Columbine, or the people in that community, what would you say to them if they were here right now?” Moore asked. Manson’s response was instant. “I wouldn’t say a single word to them,” he answered. “I would listen to what they have to say. And that’s what no-one did.”

Sadly, the Columbine High School shootings will forever be an unavoidable part of the Marilyn Manson story. Speaking to the Guardian in 2017, Manson admitted, “Honestly, the Columbine era destroyed my entire career at the time.” In 2018, speaking to Kerrang!, the singer reiterated that the period was “a real fucking terrible time”, but told a revealing, and heartening, story. Addressing the fact that he was wearing what looked like a Columbine football jersey in the photos on the cover, he revealed that the shirt had indeed been made by a former Columbine student who had survived the slaughter.

“He was there when it happened and he made it for me as a gesture saying, ‘I don’t feel like you deserve to be blamed for it because it wasn’t your fault,’” Manson said. “It was a great gesture.”

“Columbine shut my life down, but I’m not afraid to do what I do.”