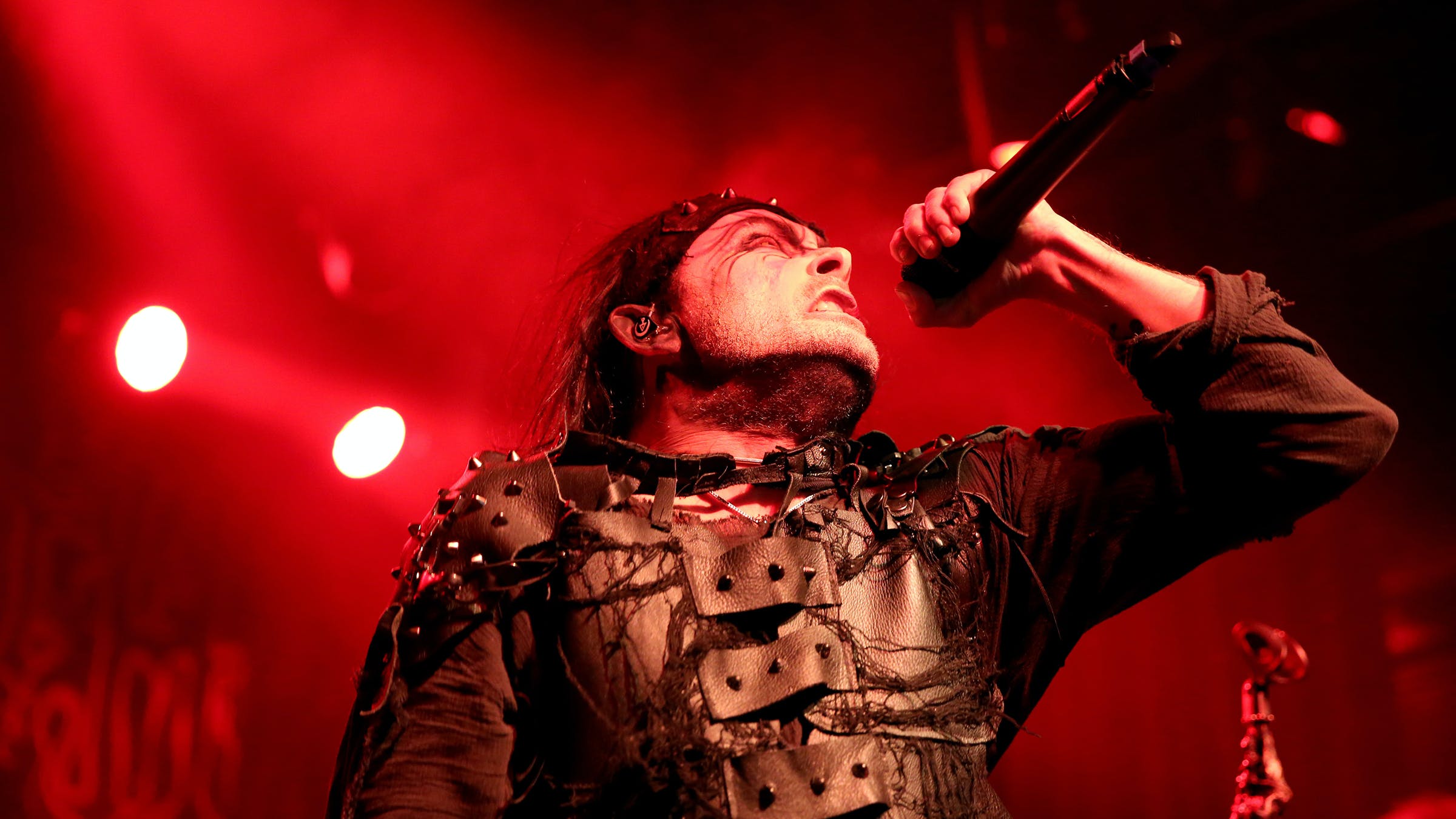 The crowd at New York’s Irving Plaza doesn’t bristle with spikes tonight. No one misanthropically eyes each other from a gap in their straight, jet-black hair. Instead, the order of the evening is hoodies, leather jackets, and work boots. Lots of people wear ornate depictions of Satan or the word ‘CUNT’ on their clothing, but they don’t seem interested in sacrificing anyone or saying that word too cavalierly. In a scene as fashion-oriented (real talk, though) as black metal, this says something. This audience isn’t here to immerse themselves in philosophical darkness with no real name. They’re here to see Cradle Of Filth, black metal’s most recognizable act. They’re here to see a big concert where they can sing along to songs about sex and vampires.

“We’ve come back with a considerably bigger stage show,” says Cradle frontman Dani Filth over the phone a few weeks before the show. “So for a start, I’m looking forward for that all to come together. We wento to LA for three days before the tour to hole up in a rehearsal room and try all the new lighting, the ice cannon thingies and costume changes...the stuff that’s going to take it the next step level. So I’m looking forward to that, because we haven’t done that for a while.

“The majority of this tour is other places that we missed out on the last tour, give or take five venues,” he adds. “We’ve jumbled the set around again since we went out last year, so there’s a bunch of new stuff in there, a couple of songs we haven’t played live before, or for a while. For example, we’ll be playing Saffron’s Curse on the next tour. I can’t remember the last time we played that -- probably the Midian tour.

One of the best parts about talking to Dani Filth is how direct he is. He doesn’t go off on tangents or give you sprawling answers full of guarded language. He’s working, you’re working, there’s a show to put on. That doesn’t mean he’s rude or brusque (or unconcerned with underground metal -- he still takes a moment to call out Craft, Zeal & Ardor, and Then Come Silence as bands he loves), only that he knows what he’s about, and like most performers who deal with a lot of moving parts at any given time, he’s probably asked himself your question long before you came up with them.

“Everything’s planned months in advance,” he says. “Since pretty much October, maybe earlier, this tour has been in production. The premise that we’re actually going to go somewhere prior to the tour and try out the new lights, meet the new crew, get the new songs fine-tuned, it just makes perfect sense. Normally we would do that sort of thing, but it just depends on how squashed in these tours are."

This American trek is all about acts with tight sounds and solid production value, with monster rockers Wednesday 13 and carnival horror metallers Raven Black filling out the bill. The roster of bands leads one to assume a lot of make-up tips and latex removal techniques will be shared backstage

“We have done in the past,” says Dani. “We toured with GWAR. So yeah, we just share some light prosthetic penis tips.”

Well, okay, so, next: any prosthetic mutant penis advice you want to give us.

“Yeah, don’t leave them under the bus, in the cold,” he laughs. “Because they get literally too hard, and have a tendency to snap.”

The night kicks off without a hitch; a surprising portion of the crowd is already present before any bands even play, and they’re quickly drunk, loud, and excited to see something evil. Raven Black stomp and shriek with unfiltered enthusiasm, and Wednesday 13 is a Janus-faced spider monkey from the underworld who powers effortlessly through a tight set of spooky metal. But though the crowd is appreciative, it’s obvious they want something more sinister, and as the stage is festooned with a rose-covered altar of keyboards, a Baphomet mic stand, and a line of flickered gothic lanterns, people start screaming and just don’t stop.

Cradle Of Filth appear amidst a classical overture before quickly leaping into Gilded Cunt and getting the crowd shouting the band’s favorite word in unison. Every member of Cradle looks like they were drafted from a different kind of band -- guitarists Richard Shaw and Ashok appear pulled from the ranks of a grim basement two-piece and a diabolical European melodeath act respectively, while keyboardist and clean vocalist Lindsay Schoolcraft could easily front an ethereal gothic folk metal crew. Dani himself looks like a combination of them all, his serpentine corpsepaint leering over a sweeping cape and spike-covered megaplatforms.

And yet at its core, Cradle’s show feels geared toward the fans, more like those of road-warrior acts like Lamb Of God or Obituary than anything else. Dani bounces excitedly and baits the crowd, while Shaw lets his duster and hair whirl as he dervishes about during termolo-picked guitar parts. The set, though peppered with early tracks like Dust And Her Embrace and Bathory Aria, is mostly new material; even the big classics are newer, with Saffron’s Curse, Nymphetamine Fix, and Her Ghost In The Fog receiving giant sing-alongs from the packed ballroom.

Even after the band toss out guitar picks, take a selfie, and leave, the audience never loses its fire, and chants “CRA-DLE!” all the way down the stairs of Irving Plaza and out into the street. Rather than exhaust the enthusiasm of their fanbase, it seems that Cradle Of Filth have only stoked that fascination further by putting on a show fans who want even their esoteric occult evil to be super entertaining.

“I think there’s more avenues for bands these days,” says Dani when asked how he thinks the climate is changing for metal bands looking to make their name. “There’s more places to tour. Russia’s opening up, the Ukraine, Eastern Europe...I think due to the current state of music, which is slightly repairing itself, there are more festivals, more tours. Even if people aren’t investing in the physical product, they come out. People have always tape-traded, but it’s so immediate nowadays. It’s easy to download twenty to thirty albums in an afternoon, and you lose appreciation of it.”

The master of spook, Wednesday 13, bites back on Necrophaze

"I Think We Are Alien. Something Manipulated Our DNA": 13 Questions With Wednesday 13

Wednesday 13 talks horror villains, life on other planets and being dead for a day in our 13 Questions