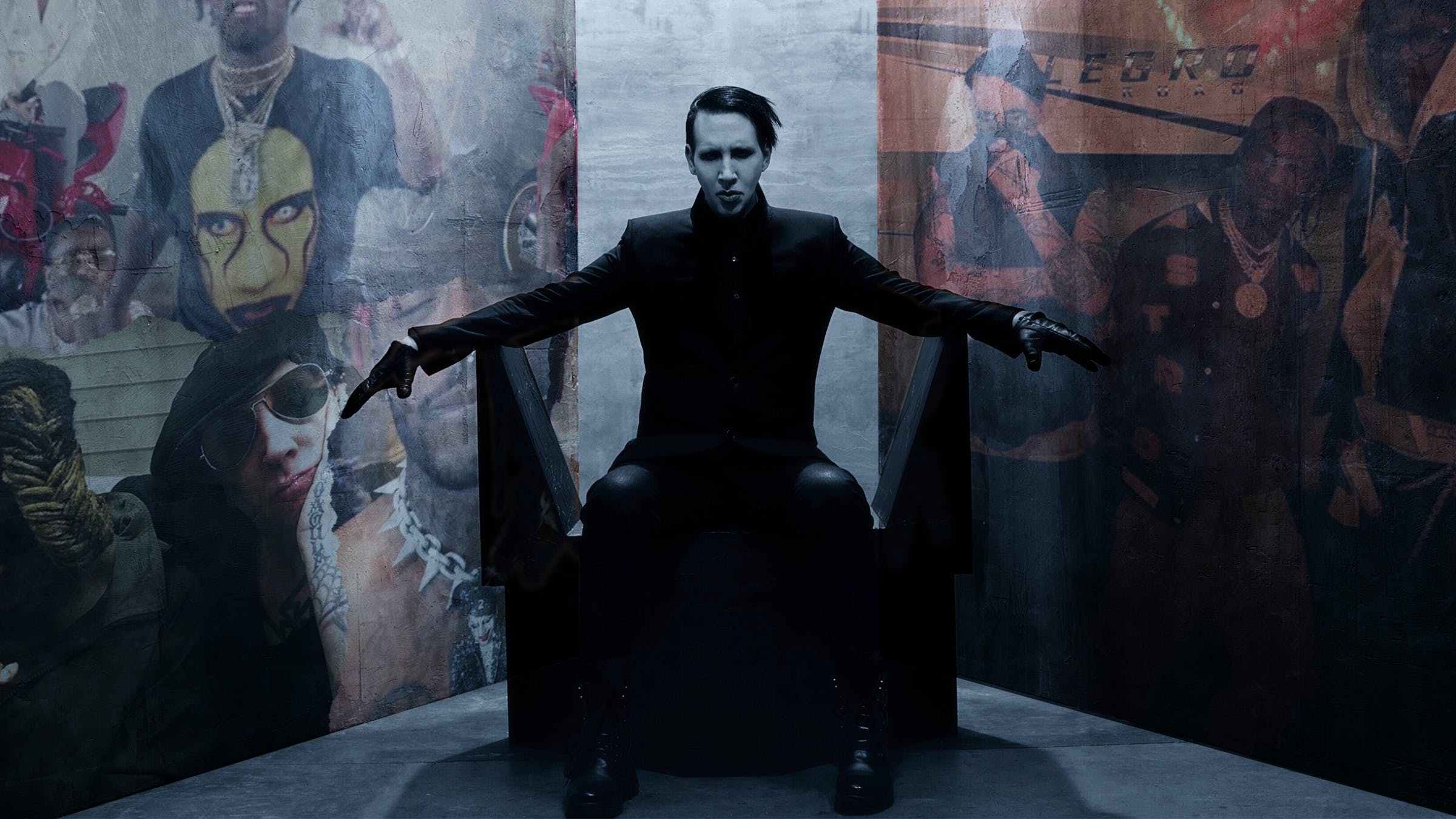 When Marilyn Manson showed up at Travis Scott’s Astroworld this weekend -- a hip-hop festival where Manson was the only real rock act -- plenty of fans were surprised, delighted, and even a little weirded out. Even louder in their amazement and confusion, however, were the press, who played up Manson’s appearance, and the bewilderment of some rap fans, as a massive deal. Hip-hop is gangster dance music, Manson’s a bible-burning goth -- who would’ve thought the two could work so well together, right?

Fans of both metal and hip-hop, however, know better. Manson has long positioned himself as a friend of hip-hop culture, and has fostered a cult of personality that rap fans respect. And now that he’s become a senior representative of rock music at both its most theatrical and its most honest, his cultural awareness is paying off.

Even before Manson collaborated with hip-hop artists, the central theme of his persona aligned with something rap has always promoted: scaring the shit out of polite society. Early hip-hop artists like NWA and Public Enemy were all about thrusting the truth of being black in America into the faces of privileged white people who would never understand their experiences. Gangsta rappers like Notorious B.I.G. and Tupac, meanwhile, laughed at the stodgy standards of rich white folks, showing that they could make as much money as any judge or stock broker on the streets or in the rap game. Manson’s target may have been evangelical Christians first and foremost, but his message was consistently the same: fuck your precious sheltered life, fuck your hypocritical lies, and fuck you.

READ THIS: 5 Soundcloud rappers that metalheads need to know about

The first notable instance of Manson collaborated with a rapper was on The Omen, a track from DMX’s 1998 album Flesh Of My Flesh, Blood Of My Blood. The song has the god of fuck reciting the chorus in a steady, occultish rasp that feels like it could summon an evil spirit. DMX had always been aligned with Manson’s love of blood and blasphemy, presenting himself as more aggressive and biblical than most; Flesh Of My Flesh… also includes lyrics about fucking corpses, and its follow-up album is titled Its Dark And Hell Is Hot. That he got THE scary, satanic heavy metal star of the time to guest on his track showed that he saw something in Manson, a voice as genuine and scary to the worst people as his own.

Perhaps even more powerful was Manson’s appearance in Eminem’s The Way I Am video. By the time the track blew up, Marilyn was elevated from scary rock star to root of all evil, having been scapegoated by parents and moral authorities for the Columbine High School massacre in 1999. Eminem, similarly, was suddenly the poster boy for every troubled white kid who chose rap over metal. The lyrics of The Way I Am mention Manson specifically and call out parents for looking everywhere except at themselves to figure out what went wrong with their children. The appearance of the shock rocker in the video — shirtless and stark, looming behind Eminem like America's deformed child locked in the attic -- illustrated the brutal truth behind all the pyro and feather boas he was known for.

Manson's most visible statement of his appreciation for hip-hop was probably the video for his cover of Tainted Love from the soundtrack of Not Another Teen Movie. Here, Marilyn looks the part to an exaggerated degree, complete with a lowrider, a grill, and a breakdancing spooky kid in a shirt that says, ‘Ain’t nothing but a Goth thing’. What saves the video for smacking of cultural appropriation is that Manson doesn’t do anything to act like a rapper -- he’s still the same slithering, sexy horror show we all know, just in flashier clothes than usual. At the same time, the point of the video is that Marilyn’s goth cadre is showing up, freaking out a bunch of suburban teens who think they’re cool, and watching an insane dance show -- exactly what most rappers spend their nights doing.

It’s also not as though Manson had never worn bling before the Tainted Love video. Starting with his Mechanical Animals era in the late ‘90s, the singer truly embraced his role as rock royalty, albeit in a dark and esoteric kind of way. But there’s an understanding in his elaborate goth preening, similar to that of most rappers, that the peacocking is fun but at times meaningless, a symbol of surviving life’s horrific shitshow as an individual rather than getting a seat at the table. And never has that idea been more relevant in hip-hop than right now, as mental illness, drug addiction, and the realities of race in America have re-emerged in new, hyper-aggressive ways.

For all of his work with rappers and appreciation of their style, that’s what first endeared Manson to hip-hop fans -- his music. Marilyn Manson’s songs don’t have the harsh, all-angles blaze of extreme metal or the lacy, melancholy death rock of goth; instead, they throb with primal rage and march to a thick, pneumatic beat. One can mosh to Manson’s music, but one can dance, have sex, and get fucked up to it just as easily. With his lyrical themes of disillusionment, nihilism, and fury at the powers that be keeping him down -- most notably God -- the singer offered a level of grimy sincerity that plenty of other artists never quite understood, but that young listeners immediately appreciated as universal truth.

The new combination of rock and rap that’s unfolding before our eyes in 2019 has a notable unifying principle: pain. On the surface, hip-hop is all diamonds rings and rock is all flame tattoos, but younger audiences who have experienced the bullshit nature of those concepts are now turning into the stars of today. Their message is very firmly that they’re not okay, and that the party is more an escape than a lifestyle. Genre boundaries have become less important, with young musicians focusing on those artists and public figures who have remained active, insightful, and true throughout their careers -- all of which describe Marilyn Manson, who has never shied away from the dark side of life even as he embraced his stardom. A guy like Lil Uzi Vert rocking Manson shirts and bling of the rocker dressed as Mickey Mouse is just a declaration that he's not playing the game.

In 2019, the world often feels like a whirlpool of turmoil, confusion, and hypocrisy — an environment in which Marilyn Manson’s confrontational honesty has always thrived. As hip-hop has become the mainstream and therefore fallible, and as its new dark stars embrace not giving a fuck, Manson has come to represent their ability to make art out of unhappiness. His tireless commitment to showing society the monster in the mirror has made him an icon for all of those, regardless of cultural boundaries, who will never be one of the beautiful people.

READ THIS: 10 rock collaborations that you won't believe happened