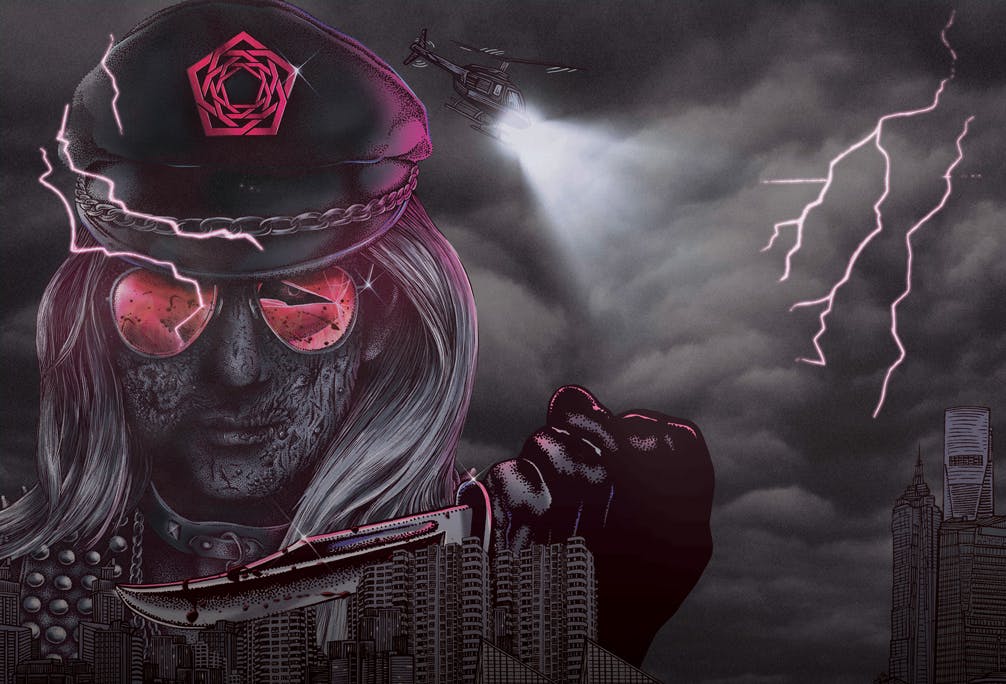 The past is a foreign country, it’s been said, and they do things differently there. If that’s the case, French synthwave maverick Carpenter Brut should be regarded as one of music’s great adventurers: a swashbuckling mercenary ram-raiding decades past to drag their most vibrant ideas thrillingly back to the future.

“I just grew up in the ‘80s,” he grins, bashfully batting away such overstatement in a luxuriant French accent on the road from Stockholm to St Petersburg. “I started out listening to Maiden, Metallica and Megadeth, then more vicious stuff like Cannibal Corpse and Napalm Death. Cinematically, I watched everything from Steven Spielberg and Star Wars to The Terminator and Predator. Those influences run through everything Carpenter Brut does: the desire to give you something violent, cinematic and fun!”

“The more violent real life gets,” Carpenter reckons, “the softer popular art becomes. The nastier society is, the nicer the mainstream.”

Accordingly, debut LP Leather Teeth harks back to the era of Reaganite excess. The ‘soundtrack’ to an imagined coming-of-age horror movie ‘released’ in 1987, it’s the first act of a fresh trilogy. A tale as old as VHS, we follow the doomed infatuation of one high school geek by the star cheerleader. Rather than simple rejection however, a tragic accident sees our (anti)hero suffer severe disfigurement. Reinventing himself as über-desirable hard-rocker Bret Halford (a meld of Poison’s Bret Michaels and Judas Priest’s Rob Halford), he finally gets access to the women he’s always wanted – but now he’s out for bloody revenge

“Movies today are too polished, too thin, and too soft to be interesting,” continues our sonic auteur. “Films like Paul Verhoeven’s Robocop or Total Recall had violence, but a political message, too. I don’t know about kids growing up watching the movies they do today. Will they get the same enjoyment we did? Will they dream the same dreams?”

More than the outlandish rough-edges of those midnight movies, Carpenter pines for their economy – and the invention it bred.

“Those guys had to be smarter filmmakers. Directors like John Carpenter (Halloween, Escape From New York) often wouldn’t have enough budget to commission the movie’s score, so he’d write it himself. Having a couple of synthesisers meant real focus on the melody. The music that came from that was simpler and more efficient – and more iconic for it.”

And can Carpenter and his synthwave contemporaries take any responsibility for the Master Of Horror taking his soundtracks out on tour?

“I don’t think John Carpenter has anything left to prove,” he laughs. “Maybe it’s down to synthwave influence, commercial interest or just him enjoying his twilight years. I don’t care; I just think it’s so cool.”

Carpenter has never been a fan of sequels, but he gleefully confirms the second act of this new trilogy will follow in the icon’s gory footsteps. “Part Two will be called Leather Terror,” he says, relishing the cliché. “It’s going to be much darker and more intense.”

Like the best horror movies, Carpenter Brut understands the value of mystery and not revealing the maniac behind the madness.

“You don’t have my picture. You don’t have my name. You don’t know anything about me,” he revels in a carefully guarded anonymity. “I make music exactly the way I want to, to compose without distraction or compromise.” Retreading a favourite, unapologetically French metaphor he explains that music is like food, and an impressed diner rarely needs to know the chef.

“I’m a huge fan of Ghost,” he agrees, “but when you know the identity behind Papa Emeritus it feels like something is lost. Corey Taylor didn’t have much choice when fronting Slipknot and Stone Sour, but it felt like [part of the masked identity was missing] once you knew who he was. Behemoth don’t even wear masks, but when you see Nergal onstage, dressed in character he’s scary. When you see him doing day-to-day things on Instagram, it feels weird.”

Looking to electro – where acts like Orbital and Deadmau5 have achieved superstardom with relative secrecy – Carpenter rejects the inevitability of public knowledge. “If I was a journalist interviewing Daft Punk, of course I wouldn’t ask them to take off their helmets. You need to respect the artist’s right to privacy of identity and of where they live.”

More than inscrutability, though, his set-up facilitates absolute control over a singular vision. “I want to work alone,” he stresses. “I make music when and where I want, the way I want. I’m a rude person sometimes, and I don’t want to inflict that on others. The only creative limitations are those within my own head. No-one can do my thinking for me.”

The offspring of theatre-manager parents, Carpenter grew up with music and performance. A self-perceived lack of aptitude, though, led to pursuing a career in sound recording rather than songwriting. “After 15 years of giving musicians advice I got bored and wanted to see if I could practice what I preach,” he says. “I was bored by the metal scene. I didn’t think it had produced anything new since Meshuggah. When I listened to electro I thought, ‘That’s cool, but something’s missing.’ That missing element was the focus and darkness of those movie soundtracks and the punchiness of metal energy. The metal kid in me kept coming out; I needed traditional song-structure, melodies, and choruses rather than seven-minute songs built around a loop.”

Jumping forward, the symbiosis between concept and composition on Leather Teeth precipitated a delve into glam metal. “As a young Cannibal Corpse fan, to be associated with glam was shameful,” he laughs. “But there was something there. Glam musicians were good instrumentalists, and their music really encapsulates the OTT ‘80s extravagance – rock stars who just wanted to fuck and take drugs.”

In true ‘80s fashion, Carpenter was able to call on an A-Team of collaborators, too: Kristoffer Rygg – AKA Garm – of Norwegian black metal oddballs Ulver (on Cheerleader Effect) and Mat McNerney of Hexvessel/Grave Pleasures (channelling Meat Loaf on Beware The Beast).

“Part of music is about realising dreams. I don’t give a shit about being the next Metallica, but I do like to work with the other great artists who give me the energy to do what I do. I’ve been a huge fan of Ulver for over 15 years. And with Mat, I can’t remember which of us sent the first email, but he and I had been expressing mutual admiration. It’s about receptiveness. I’m pretty sure I wouldn’t have the same success emailing Maynard from Tool!”

Receptiveness is a recurrent theme. “Metalheads are more open-minded than they’re given credit for,” Carpenter ponders when asked the question of why his music has connected to the battle-jacketed masses.

“There are so many subgenres – death, doom, black, stoner, biker – and there’s an inherent bridge to other dark and gothic music, too. A classical or hip-hop fan might not listen to Meshuggah. But a guy in a Meshuggah shirt could be listening to anything. Genre is just a label. It’s possible to feel the same atmosphere and energy across those boundaries.”

Live performance is key. Performing with a live guitarist and drummer (“I play with friends onstage because it sucks to be alone on tour”) it’s easy to see the transferable mosh-pit appeal.

Indeed, the live arena has proven the litmus test for Carpenter’s own passion. “I didn’t like playing live at the beginning,” he admits. “I just wanted to make music in my room. When it became clear that people wanted me to play I worked hard to put on a real show. It’s the same as Trent Reznor with Nine Inch Nails: if I’m going to play live, it needs to be huge.”

Such bravado has propelled him down a rocky road. Playing Paris’ famous Olympia venue is seen as a milestone. “We had 300 people at our first Paris gig, the last time we had 3,000,” he reveals. “Our confidence and ability to put on a show has really grown.”

Carpenter Brut’s emergence from the underground has seen the violent luridness at the heart of his work brought into the sight-line of those who demand such material be sanitised. But isn’t that the point? Does he create art as a reaction to the homogenised mainstream?

“That’s a big question,” he smiles, pensively. “I don’t really care about what’s happening in real life. I’ll play clips showing people being murdered, but that doesn’t mean I’m advocating murder! I’m a good man who does his best to avoid aggression. It’s my responsibility to tell a story and even if that story offends some people it can still do good by making a valid point.

“In the end, we’re not serial killers,” he shrugs. “We want to have fun with people and for them to have fun with us. Life is good! And the sight of metalheads dancing along to Michael Sembello’s [Flashdance soundtrack] Maniac just never gets old…

The 13 Best Songs About Leather

Ready to start living the leather life? Strap these 13 tracks on for size.

29 More Bands Have Been Added To ArcTanGent 2019

An eclectic line-up of heavy music's outliers made for an awesome night at Irving Plaza.

The teenage thrashers are finally giving the States a mouthful of Te Reo Māori to chew on.