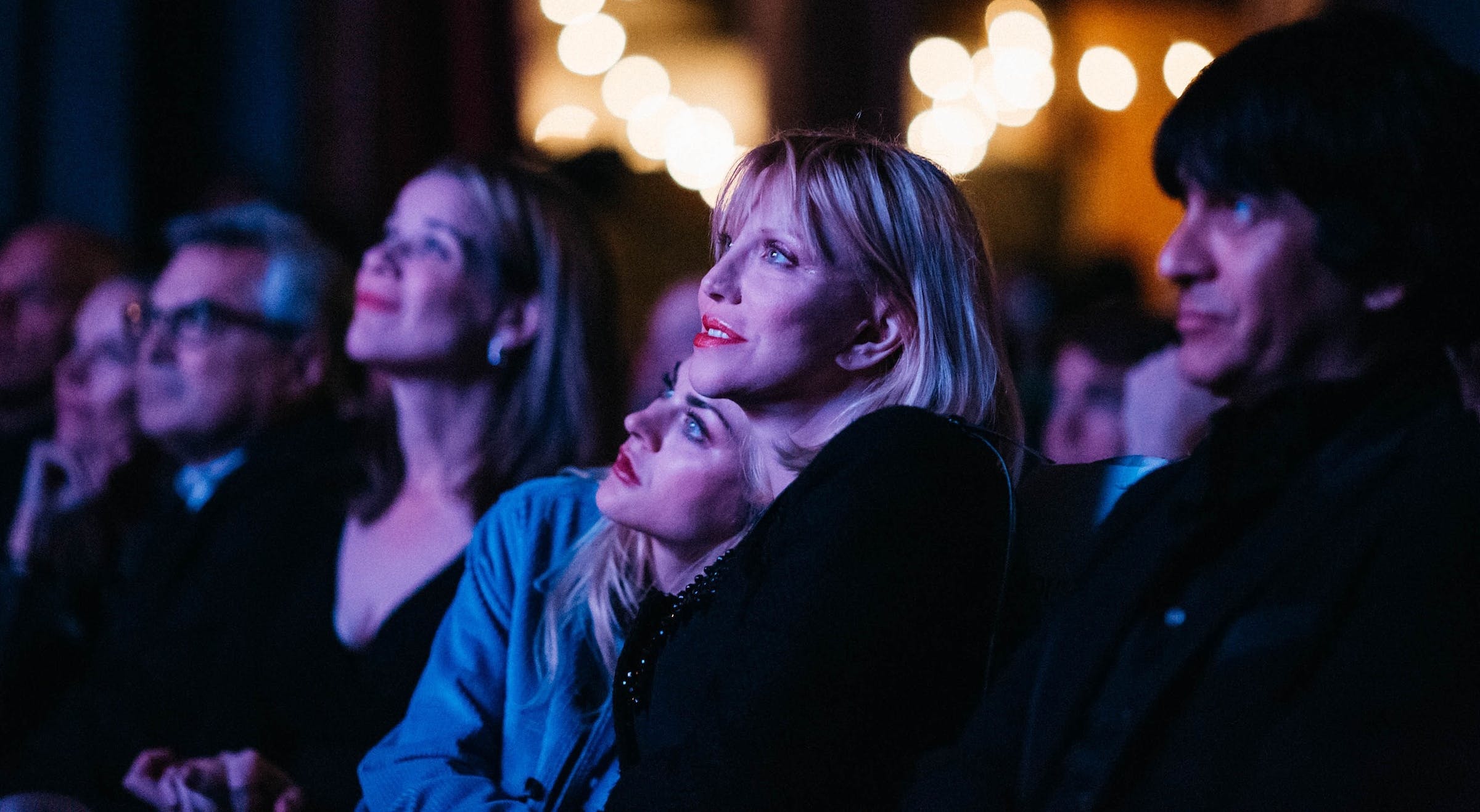 A converted industrial factory on the edge of the Hudson River in upstate New York played host to a very special party on Saturday evening, October 27. The Basilica Hudson is owned by Hole bassist and artist Melissa Auf der Maur and it was here, where the noisy AMTRAK trains scream past periodically through the night, she held a career retrospective and celebration of her old bandmate and close friend Courtney Love. More than that, what happened was a critical review and reframing of Courtney’s career.

With Frances Bean Cobain sat with Courtney on the front row of the seating area, Courtney and Melissa’s friend Joe Mama-Nitzberg (he also did the album artwork for Hole’s 1998 album Celebrity Skin) introduced the evening. “Don’t worry,” he told the audience, “as ever on a night with Courtney, I promise it won’t be dull.”

Melissa began with a colourful three-minute highlight reel of Courtney’s contributions to culture: as a musician, an actor, a visual artist, a feminist and muse. One of her many infamous quotes boomed around the space, rigged with fairy lights: “I wanted the prize, and I might get the prize, and, if I don’t get the prize, I’ll be kind of sad, but I’ll have gone down as being some place in evolution – as a reference point for whoever does get the prize.”

As this event proves, what's clear in 2018 is that she did in fact get the prize, and has simultaneously become the reference point for women in rock, paving the way for those after her.

Next Melissa read a love letter she’d written to Courtney telling her that she altered her life forever, but that it’s the female fans whose worlds she transformed most, and on the grandest scale.

“The lives you really changed were those in the front row, at home in their bedrooms, holding onto every word and every scream, [the people at] rock festivals around the world, the ones you pulled up on stage to play your guitar. You were singing for them, you made a safe place for them to be angry, to be beautiful, to be heard and to be understood.”

In the present day, Melissa noted, pop culture is much more welcoming of Courtney whereas in the '90s she was widely reviled. Now, in feminism and in rock, she, as a character, voice and a thinker, fits perfectly.

Spoken word, drag and cover performances from notable creatives showed that the messages of her work – femininity, rape culture, patriarchy, power and gender – can be updated for the modern world. Natasha Lyonne from Orange Is The New Black, for example, read the lyrics to Teenage Whore via a video recording and Meredith Graves, music journalist and frontwoman for Perfect Pussy, performed a spoken word poem about Courtney and Hole’s relevance to young women, femmes and gender non-conforming people. Famous friends recorded tributes – REM vocalist Michael Stipe, performance artist Marina Abramovic, designer Jeremy Scott, and former Hole bandmates Eric Erlandson and Patty Schemel. Weaved through this was discussion of #MeToo, Donald Trump and the last gasps of toxic patriarchy, highlighting how vital artists like Courtney remain today.

The second half of the evening saw Courtney and Melissa in conversation. Topics spanned from Courtney breaking into her film career, the fact that she was always “the smartest girl in the room, the most well-read”, the long-winded making of Celebrity Skin, and the surrounding period of the second half of the '90s where Courtney cleaned-up her act.

“I was pissed off with the rock world’s response to what I’d always said I was going to do, which is anything I can get my hands on,” she said.

During this conversation, Melissa projected some of the thousands of print photographs that she’d only just recently digitised. One such a image showed Courtney poking her tongue out, crouched with an ancient laptop. This prompted talk of how she was one of the first musicians to engage with her online audience, sharing details of her life in chatrooms and having conversations with fans from 1995 onwards.

Perhaps the most prominent moment of the evening is when Melissa played the now social media-famous clip of Courtney Love in the '00s on a red carpet, being asked what her advice would be for young girls in Hollywood.

Prophesising #MeToo years in advance she said, “If Harvey Weinstein invites you to a private party at the Four Seasons, don’t go”. Melissa asked, “What does that say about who was listening?” Someone from the audience screams, “Courtney Love was listening!” Melissa agreed, “She’s acting and speaking and fearlessly telling.”

“I knew about it, I said shit about it, I knew I’d never be in a Miramax movie,” said Courtney of Weinstein’s abuse of women in the film industry. “I knew that because I had a big mouth about it a long time ago.”

People weren’t listening to Courtney about Weinstein at the time because she was Courtney and none of the things a woman supposedly should be.

For the grand finale, Faith No More keyboardist Roddy Bottum joined Melissa and Courtney for a simple piano version of Softer, Softest. Following that, girls from a local rock school from the Hudson Valley (Rock Academy Rebel Girls) came onstage for Doll Parts as the audience raced out of their seats to stand at the front. The 16-year-old girls harmonised with Melissa like a Greek chorus ('Someday you will ache like I ache') as Courtney howled over the top. It felt implied that these girls might not have been here, learning their instruments, without her. They all finish with Miss World filling the room.

As soon as the night ended Courtney rushed offstage to leave with her daughter out the back of the venue. She’d get bombarded with the fans, who came from all across the U.S. to be here otherwise, and sure enough people ran to the exits to try to meet her. She might not have felt like Miss World at the time of writing that song in the early-'90s, but that’s the person this night confirmed she has become, to those here in her honour and the millions more she's inspired worldwide.