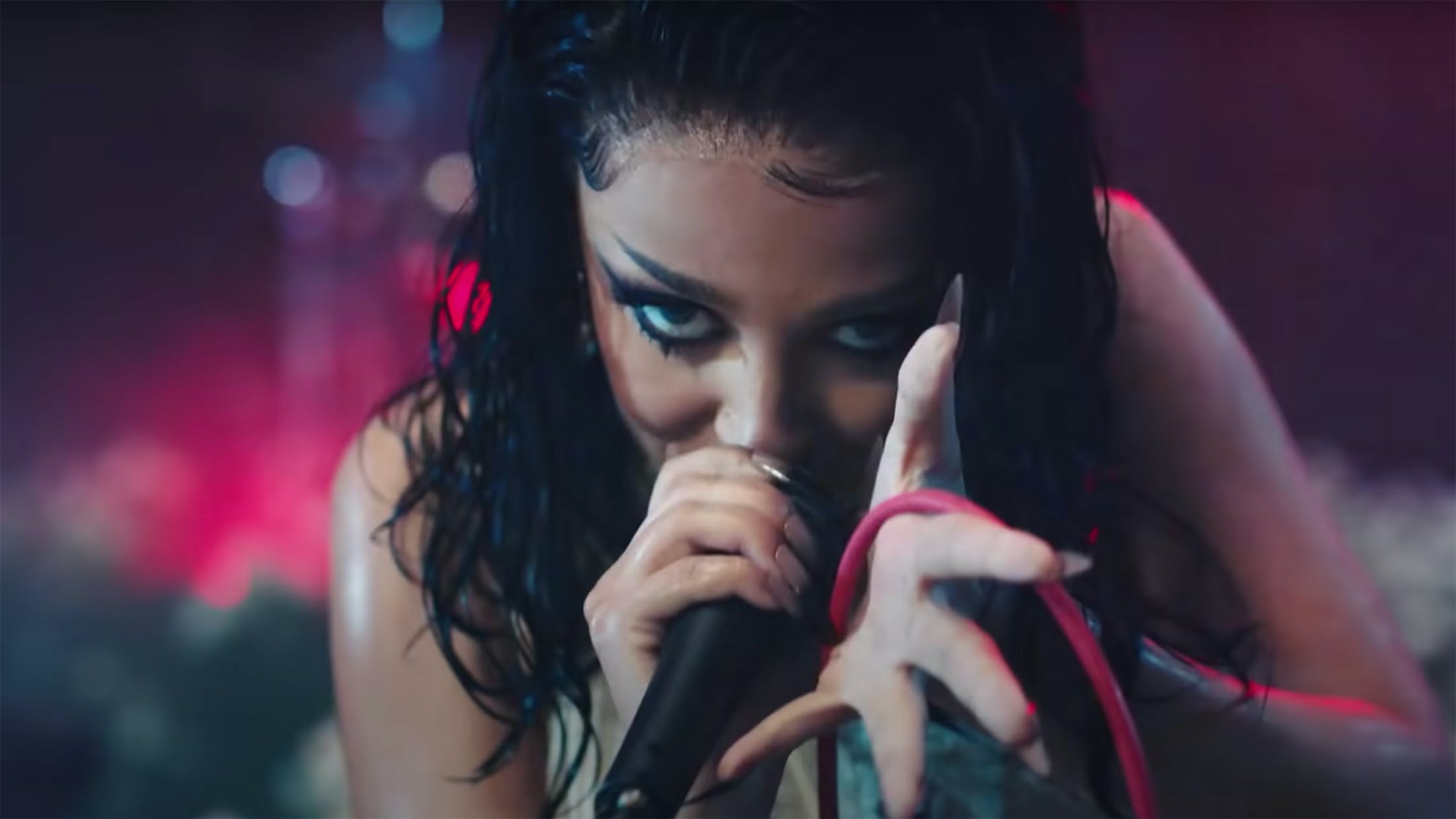 For the past decade, bands with neck tattoos, haircuts and trendy clothes have been dragged by ‘metal fans’ for playing pop music, but now it looks like the opposite is true, as some of pop’s biggest names are diving into the world of heavy for inspiration.

And it’s been a long time coming. For years the world of pop has been borrowing from metal culture: from Rihanna’s death metal-inspired logo she premiered at the 2016 VMAs, to that time Justin Bieber enlisted extreme metal artist Mark Riddick to design him some tour art, to Zayn Malik’s Slayer-esque merch line, the moguls of mainstream music have long been eyeing up what we have to offer. And now this original fascination with metal visuals has overflowed into the actual music.

We shouldn’t be surprised, of course. As has been posited for a while – including by Poppy in her Kerrang! magazine cover – we’re living in a post-genre world. When everything is available at the touch of a button, how can you limit yourself to just one type of music? Poppy herself borrows from K-Pop, nu-metal, electro and more in her brain-boggling bombast.

Earlier this year, Rina Sawayama’s incredible debut album turned pop on its head, experimenting with the form, embellishing her R&B/pop with nu-metal swagger, arena rock bounce and even some grungier, emo passages to elevate the emotion. Artists don’t paint with just one colour, so why should musicians?

Singer and TikTok megastar Doja Cat recently sent her fans into raptures with a reimagining of her monster hit Say So at the MTV EMAs. Emerging from a TV like the girl from The Ring, the summery, funky vibes of the original were replaced by crunching guitars and a serious metallic edge (with similarities to djent/prog guitarist Plini), as Doja Cat hurls around the stage in a shredded dress and talons. It’s punchier, it’s rockier, it’s better than the original, with everyone involved clearly relishing the moment of experimentation.

“I’m tired of Say So too y’all,” tweeted Doja Cat shortly after, no doubt bored of her original arrangement. YouTube was also in agreement, with “can she do more songs with this vibe pls” and “I already liked her song originally BUT THIS IS GOLD” amongst the most liked comments. Whether this is a one-shot-and-done remains to be seen, but judging by the reaction from Doja onstage and her fans online, don’t be surprised if we hear some riffs added to Boss Bitch soon.

A metal cover and genre-blurring is one thing, but Miley Cyrus is taking her adoration for rock and metal one step further. We know she loves rock and has performed a variety of covers live in recent years – from Nine Inch Nails’ Head Like A Hole for an episode of Black Mirror to Temple Of The Dog’s Say Hello 2 Heaven at last year’s Chris Cornell tribute show – but Miley’s rock fandom has now manifested itself in her own music. No sooner had she revealed that she was working on a Metallica covers record did the pop singer announce details of Plastic Hearts, what is widely believed to be a full-on rock record, featuring guest spots from American icons Joan Jett and Billy Idol. The album cover was even shot by acclaimed rock photographer Mick Rock for that added level of legitimacy. On Mick’s own Instagram we can see Miley licking what looks like a glitterball tiger, which is pretty rock’n’roll in itself.

Of course, we’re yet to hear the record, but there’s no doubting Miley’s credentials, talent and genuine love for rock and metal.

And this appreciation from the pop world doesn’t stop at metal, as proved by rapper Machine Gun Kelly in his awesome pop-punk record Tickets To My Downfall – recorded with friend and mentor Travis Barker. MGK himself grew up playing Warped Tour so it shouldn’t be a surprise to see him firmly embracing his love of blink-182 and sun-soaked, keg-party vibes.

“I didn’t ‘switch genres’; I’m versatile, and the wall isn’t boxed in,” MGK (known as Kells to his mates) told us in his recent K! Cover Story. “I would like to project creativity and love, rather than limitations. Limitations cause you to look at me with my pink nails and believe that this same hand won’t punch you in the face, right? Limitations would cause you to believe that, because I’ve put out four albums that are rap, I shouldn’t put out a fifth album that’s not rap.”

The non-rap record certainly paid off for Kells, as Tickets To My Downfall is his first and so far only record to debut at Number One in the U.S. album charts. Like with Doja Cat above, don’t look shocked when MGK drops another pop-punk rager next year.

MGK’s partner-in-crime Halsey (who features on album highlight Forget Me Too, which glistens with Paramore energy) must’ve enjoyed her punk vacation, as she’s also considering doing her own project.

“I do really want to, but it needs to come naturally,” said Halsey, on the topic of her own punk album. “I’ve never sat down before and been like, ‘Okay, I want to make this type of album.’ The album kind of makes itself. When that time comes, it’ll happen on its own. I definitely need to do it eventually, though, because I’m starting to age out of being angsty and punk.”

If her performance on Forget Me Too is anything to go by, a Halsey pop-punk record could take the world by storm.

Which is, ultimately, what we want, isn’t it? Fans of heavy music – be it punk, metal or whatever – will often moan about the state of popular music, so if the biggest artists on the planet are suddenly looking in our direction, let’s welcome them in. Miley Cyrus going rock will bring in legions of new fans to our scene, countless Doja Cat fans have been exposed to chomping metal in the past week, Machine Gun Kelly has the power to turn millions of rap fans onto the likes of Neck Deep and Boston Manor. We all know rock music – in its various shapes and forms – is the best thing in the world, so let’s share it.