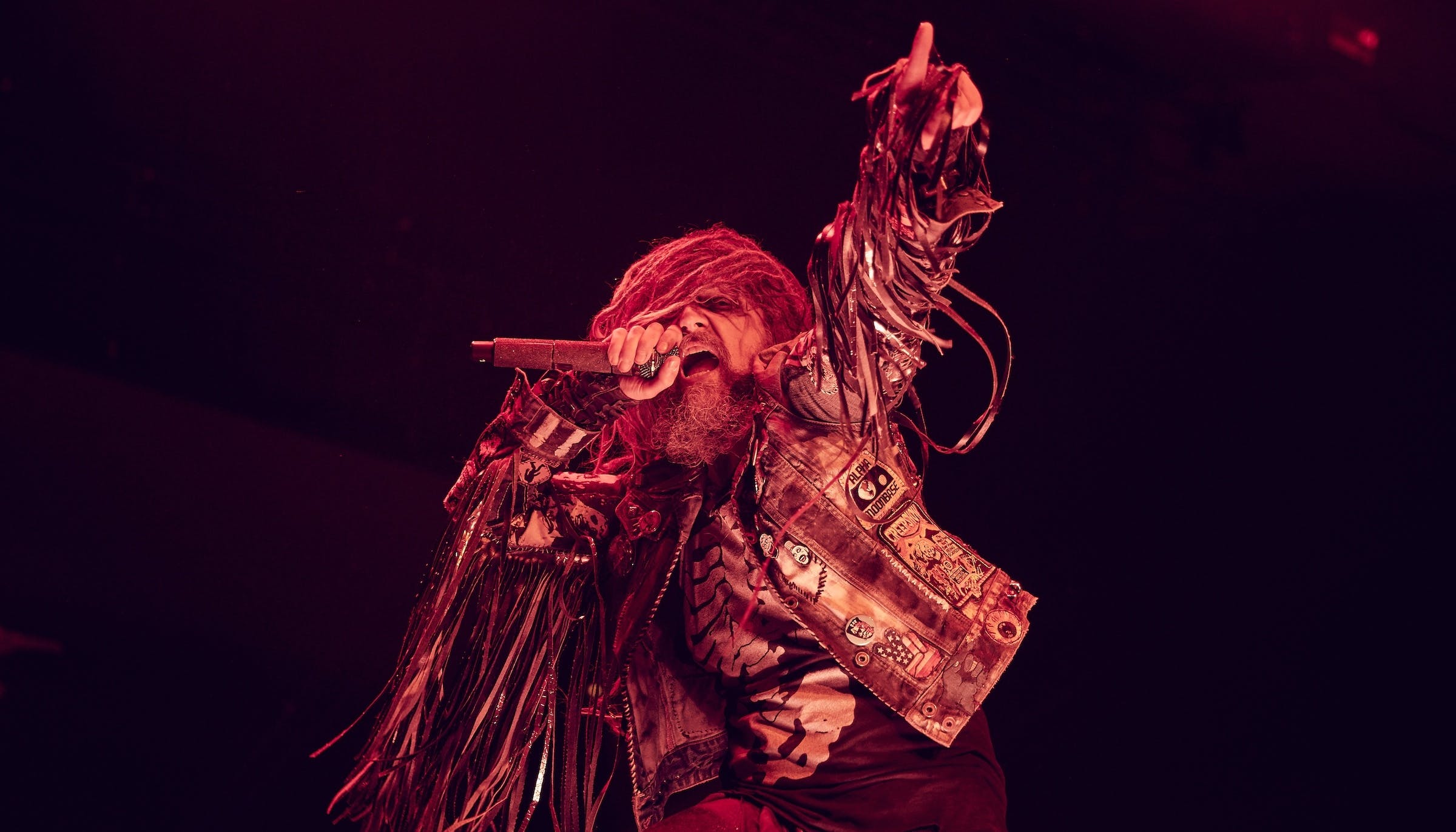 A refreshing mix of characters shuffles through security at Allentown’s PPL Center. There are old-timer bikers with faded tattoos, and excitable teens seeing their first concert. Goth ballerinas in full doll-paint and LED antennae laugh alongside old-school metal dudes in tattered sleeveless Slayer tees. There’s even a guy dressed as Jesus -- albeit also wearing a patch jacket over his robe. The variety makes sense, given the locale: along America's Rust Belt, rock still thrives, and for the web of small towns and cities throughout eastern Pennsylvania, a big arena show is a place where fans can come to meet metalheads and celebrate the loud, brazen darkness they collectively love. And with a Marilyn Manson and Rob Zombie co-headliner, celebration is the order of the evening.

The crowd is disparate as the show kicks off, looking more like that of a good-sized venue than a hockey arena. Still, Las Vegas’ Palaye Royale put on a spirited performance, opening with a section The Stooges’ I Wanna Be Your Dog before launching into Don’t Feel Quite Right.

The band’s look is a collage of scenes: the guitarists look equal parts ‘70s glam and ‘80s hair metal, the keyboard player has a shock of red in his bleached hair that smacks of anime, and frontman Remington Leith’s fishnet shirt and spiked hair feel straight out of latter-day nu-metal. But in that way, they seem like the amalgamated influence of their headliners, and Leith leaping into the audience for the last song seems to please those diehard fans in attendance. Though the audience at times looks a little quizzical, their set ends in horns in the air and appreciative applause.

The stage set-up for Marilyn Manson’s performance is big, but stripped-down -- somehow, even with the two raised platforms, sideshow mirrors, fake snow machines, and hanging inverted crosses on either side of the stage, there’s something stark about the simple four-man line-up and Marilyn’s many costume changes.

Manson himself comes off as somewhat chill; perhaps because it’s the second night of the tour, his evil diva attitude sometimes leans towards glibness, and he seems ready to end some songs soon after they start. That said, the setlist is vicious, opening with Angel With The Scabbed Wings and hitting melancholy mid-career tracks like The Nobodies and The Love Song. Patch-Jacket Jesus is crowd-surfed up onstage during Antichrist Superstar, and the whole thing ends with Manson singing The Beautiful People immersed in the crowd.

From the moment the lights go down and the dozens of screens stationed around his set light up, Rob Zombie’s performance is impossible to look away from. The band immediately launches into three classics from 1998’s Hellbilly Deluxe as a seizure of classic horror footage, Japanese schlock, and electric retro sex flickers around them. Zombie himself is a goddamned powerhouse, nimbly leaping from one platform to another in a swirl of leather tassels and whipping hair. Guitarist John 5 performs every song with a smile on his face, indulging in occasional behind-the-head solos. The crowd drinks it up with rabid excitement, throwing their hands in their air and giving the band all the “HELL YEAHS!” they ask for.

Interestingly enough, Zombie doesn’t stick with the classic stuff, and the audience seems equally excited by some of his lesser-known tracks -- Well, Everybody’s Fucking In A UFO from his latest album, and Pussy Liquor from the House Of 1,000 Corpses soundtrack -- as they are by the earlier stuff. Zombie baits them with drawled urges for girls to get on their boyfriends’ shoulders and references to Billy Joel’s Allentown, of all things.

He also spends a ton of time in the crowd, walking on the hands of folks in the front rows during More Human Than Human and using an extended guitar solo to run around the arena and come barreling through the standing room area from the back. Of course, it wouldn’t be the Twins Of Evil tour without a duet, and Manson comes out to perform Helter Skelter alongside his brother in shock.

The crowd dissipates in good spirits, with plans for long, responsible drives or even longer, less responsible drinking being called out between them. To some in bigger metropolitan areas, the night might feel like a big, all-purpose metal show; but for your average everyday headbanger who works their ass off to afford tickets to a night like tonight, it’s entertainment at its purest.