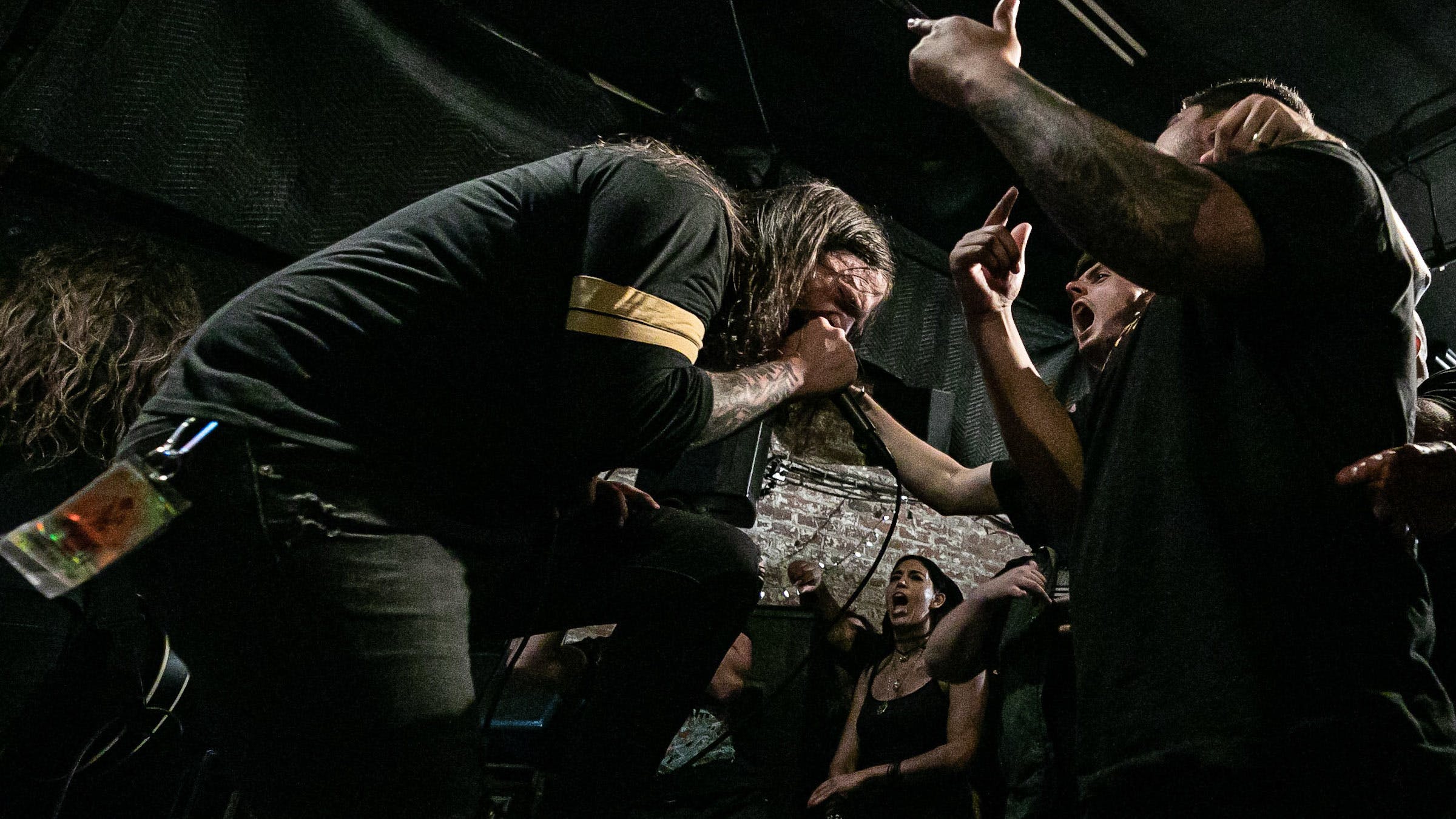 Norma Jean may not have any original members left, but the Georgia band have become staples of the metalcore scene over the course of seven albums – something which they should easily cement with the release of their new record, All Hail. Frontman Cory Brandan has been heading up the band since 2004, and, as anybody who saw their recent K! Pit in Brooklyn continues to do so with an overwhelming enthusiasm, passion and energy. That’s all the more impressive considering that he apparently never sleeps. Read on to find out why…

When you were a kid, what did you want to be when you grew up?
“I wanted to be in a band. Ever since I can remember, I really did. I remember being like eight years old – I didn’t have any instruments, but I just pretended that I did and played along to music that I had. The big revelation I had later, though, is that I didn’t realise it was so much desk work – emails and stuff. Nobody told me it would be like that!”

What happens when we die?
“I don’t think anybody really knows exactly what happens or the timeline of it, but I believe there’s a heaven. But everybody makes their own decision on that one, I guess.”

What would you like it to say on your gravestone?
“I want it to play music and blast a cool riff at you. I hope that’s going to be a possibility in the future. There’s got to be something cool like that going on – a screen tombstone! Anyone can have that idea for free – just make it happen!”

What was the last lie you told?
“Gosh! It was probably something about my taxes. I just had to do my taxes and there were a lot of questions with that and I was just like, ‘I don’t know, I think it was this. I’m guessing, but I’m just going to say this.’ That’s another one of those things I wish I’d known from when I was a kid – that you’re essentially running a business and there’s mountains of paperwork. I just wanted to play cool riffs!”

What’s your biggest fear?
“I always come back to the fact that there’s a lot of stuff I want to do and I’m not going to get to try it all in time. There’s definitely a time/mortality thing going on there that I struggle with a little bit. But I try not to put too much fear on like, ‘Oh, somebody that I love just died.’ Because of course. So I at least try to curb it to something that I can control.”

What is your worst habit?
“Probably just general unhealthiness. I have extreme insomnia – like, I was up all night last night, so I’ve been awake for like a day and a half now. I just make myself do it. I don’t know why. I guess it comes back to that fear thing – the thought that I’m going to miss out on something. It’s a bad habit. I need to sleep better, I need to take care of myself better. That kind of stuff.”

What’s the worst injury you’ve ever suffered?
“I played [American] football when I was in middle school and I got racked really bad. I wasn’t well-protected enough and it literally hospitalised me out of school for like two weeks. But I got through it, thankfully. I had a bunch of other injuries from playing football. Probably just because I wasn’t very good at it.”

Do you believe in ghosts?
“I will say yes. I think it could at least be interpreted as that. So yes, sure. I do. But I actually think the idea of spooky ghosts is kind of comical – like in a Halloween special kind of way.”

What do dogs think about?
“Their masters. Like, ‘How can I make this person the happiest person in the world? Because I’m so happy.’ They just think about making other people really happy, unless they don’t belong there - and then it’s, ‘Hey – I need to make my master happy by letting them know that there’s a weirdo here.’ So either way, it’s still that! One of the truest things I’ve ever heard is that we don’t deserve dogs, and that rings true.”

What’s the worst job you’ve ever had?
“My very first job, when I was 17, was working at a furniture factory. The made tons of different furniture, and my job was to go around with a dolly and pick up all the barrels of unused wood and wheel it back to a giant dumpster, go up an elevator thing to get there and dump it. And that’s what I did all day, and I couldn’t keep up. I would bring the barrel back and they would have another filled up, and that was just one of like 17 locations that I had to go. I had no idea how to deal with that. I lasted about two weeks. And it was at minimum wage, $4.25 an hour at the time, and there was just no way I was going to do that for that money.”

Have you ever been kicked out of a bar?
“Yes. In fact, there was a time when, in my mid- to late-20s, on tour, we made it a little game. It really became a sport – how quickly can we get kicked out of this bar? But it was always in places where we were like ‘We’re never coming back here…’ It was never from getting in a fight or cursing anyone out. It was always just something really random where they got sick of us and would kick us all out.”

Have you ever been in a fight?
“Oh yes. In high school, I went to a school that’s kind of out in the country a little bit, and me and my friend were skater kids who didn’t really belong. We got in fights with the teachers, like full on they wanted to meet us like they were going to school, too, to fight us. It was pretty brutal going to school there. Someone in our group got in a fight at least once a week. And it got really crazy. I got hit with a broom by one of the teachers, and my mom found out and it turned into a really big deal. We got banned from all the assemblies after that and we weren’t allowed to do anything extra outside of classes. And the teacher got away with it. I got called to the principal’s office, which is kind of rare – you usually get called to the vice-principal’s office when you get in trouble, so going to the principal’s office, something’s really going on. I sat down and he yelled at me, like, ‘I took care of it – is that good enough for you?!’ And I was like, ‘I guess.’ I had no idea what was going on, but my mom had gone down there and lost her mind and threatened to sue and all that stuff, but I didn’t know any of that had happened, so I was just like ‘I don’t know. Why are you asking me? I’m like 14!’ It sucked. But I’m fine.”

Norma Jean's new album All Hail is out October 25 via Solid State.