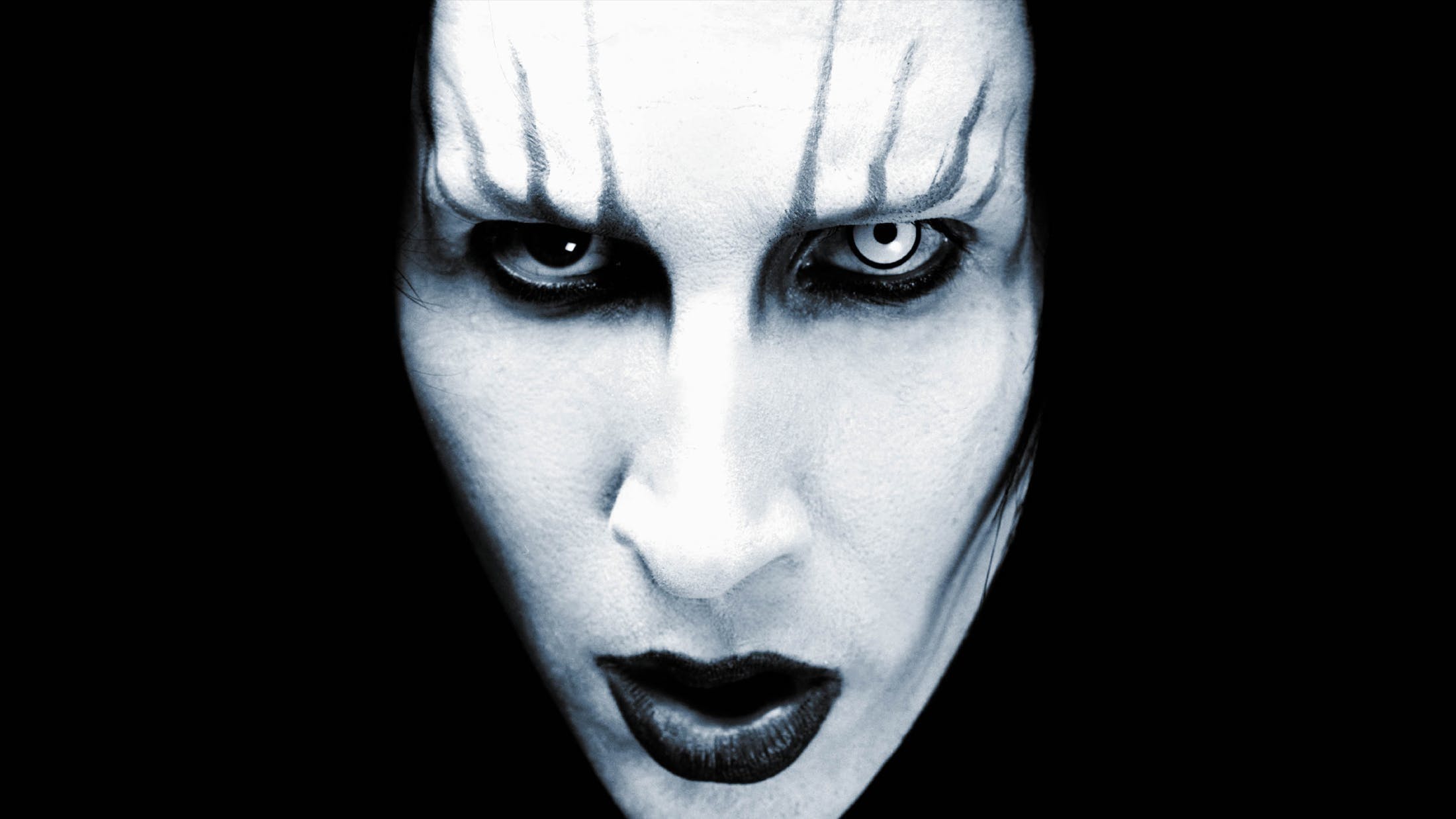 On April 20, 1999, two young men walked into a school and caused mayhem. Armed with a pump-action shotgun, a semi-automatic handgun, a sawn-off shotgun and a Carbine 9mm rifle, students Eric Harris and Dylan Klebold entered Columbine High School in Colorado and, at 11:19am, opened fire, killing 15 people (including themselves) and injuring two dozen more. In the carefully orchestrated attack, the killers also planted 99 explosive devices around the site as a means of hampering emergency services’ rescue attempts.

The reaction to the massacre was as swift as it was chaotic. As the National Rifle Association once more unpacked its well tested defence that ‘guns don’t kill people, people do’ – failing to add that they do so using guns – other commentators concluded that a share of the blame for America’s latest calamity lay at the hands of one Brian Warner. By then known to the world as Marilyn Manson, the 30-year-old enfant terrible of provocative rock was identified as being the hero to a pair of murderers so hopelessly in thrall to the dark seam of ‘goth culture’ that they’d even founded their own high school clique in its honour – The Trenchcoat Mafia. ‘Killers Worshipped Rock Freak Manson,’ The Sun claimed, while telling its readers that the man’s live shows featured ‘routines such as smoking dried excrement, performing depraved sex acts and torturing animals.’ Across the Atlantic, on Fox News an hysterical Bill O’Reilly raged that never before in the United States had there been a more corrupting influence on the nation’s youth.

The problem with this narrative was that it was simply untrue. It was later shown that neither Dylan Klebold or Eric Harris even cared for Marilyn Manson.

“If the [Columbine killers] had just bought my records, they would be better off,” Manson would later tell The Guardian. “Certain people blame me for the shootings at schools… but, honestly, the Columbine era destroyed my career at the time.”

Actually, it didn’t, but it did cause all manner of bother for this already expert agent provocateur. “I think I have had more blame accredited to me than any person in the history of music,” he would also say, adding “there should be some sort of GRAMMY for that.

Even before the release of Marilyn Manson’s third album, Mechanical Animals, a collection that debuted in the top 10 of no fewer than 14 countries – including a Number One ranking in the United States – and which this month celebrates its 20th anniversary, its mastermind had proved adept at the kind of shock tactics that only really work during a career’s first act. In this, his timing was perfect. Just as Green Day and The Offspring cleansed the palates of young listeners who had become jaded by the oppressive touch of grunge, the arrival in 1996 of his band’s second album, Antichrist Superstar, helped create a spectacle that was as enormous as it was controversial and as it was popular. In short order, Marilyn Manson’s music had made itself at home in the bedrooms of seven million teenagers.

To some, the success was deeply frightening. “You don’t make a record called Antichrist Superstar and not expect people to hate you,” said its creator, whose intention was, he said, “to do something different. To put a fucking dent in the world.” Like Johnny Rotten of the Sex Pistols, or the Beastie Boys – both of whom expertly manoeuvred themselves out of the tight corners into which controversy had painted them – Marilyn Manson became the recipient of one of the highest compliments the outside world can pay to an artist: the spectacle of a moral panic. By the time of the release of Mechanical Animals, the Ohio-born showman was the subject of (false) sworn testimonies that stated that his concerts featured bestiality, rape and free drugs. Such was the level of outright fear around his influence on impressionable young people that one school in Florida even threatened to expel any student that bought a ticket to his concerts, while the state of South Carolina paid him $40,000 (approximately £30,725) not to
appear live within its borders.

In the wake of the Columbine tragedy, things became heavier. While on tour, death threats in each city would average 10 a day, while spiking in the hundreds whenever the caravan reached Colorado. Manson’s Vietnam-veteran father offered his son the wise advice that people who harbour real intent to murder don’t normally warn their victims in advance, but even this did nothing to forestall the endless palaver of detailed security. In response to the agitation, onstage Marilyn Manson would cut himself with smashed beer bottles while telling his audience, “Fuck you – bring it.” On occasion, police bomb dogs were deployed to deal with the threats from those determined to cause maximum chaos. One problem this brought was that these canines could sniff out drugs as well as high explosives. “I had a very difficult time hiding my narcotics,” Manson would later recall.

“What happened in America is exactly the kind of thing that made me want to start this band,” he said, speaking to this magazine in 1999. “It’s why I chose to name this band Marilyn Manson and point out exactly what is wrong with America. It’s ironic when you think about how people reacted to things. Some people looked at things on such a simple scale [that] they thought that that was the kind of publicity that I wanted. All I can say is that’s not what I wanted. There’s a great difference between what I do and what people accuse me of.”

If Antichrist Superstar found Marilyn Manson taking the shtick of Alice Cooper and pushing it to diabolical extremes, Mechanical Animals saw its author embracing the fleetness of foot of shape-shifter nonpareil David Bowie. “I have great admiration for David Bowie,” he told Kerrang!’s Paul Elliott 20 years ago. But while the Thin White Duke drifted through alter egos such as Ziggy Stardust and Aladdin Sane, Manson adopted a look of atonal androgyny that still managed to cause offence. Released on September 15, 1998, Mechanical Animals’ cover artwork, designed by the New York photographer Joseph Cultice, presented the performer with breasts, six fingers on each hand and airbrushed genitalia. Despite Cultice claiming that, “I said more in one of his covers than any novel could – it made people think and cringe,” such artistry alone was not enough to prevent America’s three largest retail chains, Wal-Mart, K-Mart and Target, from refusing to stock Marilyn Manson’s third album. Despite this censorship, Mechanical Animals still managed to sell 223,000 copies in the U.S. in its first seven days of public exposure.

“My main goal with the new record was to put life back into rock’n’roll,” Manson told Kerrang! at the time of the album’s release. “Right now, the only thing that can save rock’n’roll is this album. Without it, rock will disappear like it did in the disco era of the ‘70s and dance music dominated. That’s where we’re at right now.”

Marilyn Manson’s propensity for uttering such quotable nonsense – The Clash, AC/DC and the Sex Pistols all rose to prominence in the age of disco, after all – highlights that when it came to grabbing the world by its ear his technique owed as much to P.T. Barnum as it did to David Bowie. But while Manson’s arrival in the public eye coincided with the emergence of Korn, Deftones and Limp Bizkit, it is a testament to Brian Warner’s presentational moxie that his music was almost never mentioned in relation to nu-metal. As he rather deftly put it on The Dope Show, one of Mechanical Animals’ standout tracks, ‘They love you when you’re on all the covers/When you’re not, then they love another.’

“I reinvent myself before I can get bored of myself,” Manson said at the time. “Anyone who remains static is not only being unimaginative, but is being safe.”

Out on the road in support of his box-fresh new album, the Marilyn Manson show was once more a circus of incident and misfortune. An entire three months of roadwork was lost after drummer Ginger Fish contracted glandular fever. Familiar external problems also presented themselves. In Upstate New York, Mayor Roy Bernardi cited an unspecified “moral obligation to the people of Syracuse” as a reason for attempting to prevent a concert in the city from taking place. But amid the by-now-routine hoopla, concerts were taking place, and the effect on a generation of young music fans can not be understated.

By the time the Mechanical Animals tour arrived in the United Kingdom, Manson’s army of fans were buzzing like fridges. Rumours abounded that protestors would picket shows, while some predicted that the man himself might be denied entry into the country. Onstage, the spectacle attracted the attentions of a different kind of rock audience. Gone was the male-dominated scrum with which harder rock acts were greeted at the time. A larger proportion of Marilyn Manson’s audience was female, while his provocative take on sexual politics challenged the received wisdom that heterosexuality should be the genre’s default setting. “I remember going to Brixton Academy and feeling that something truly new and exciting was taking place,” is how one female fan recalls the event. “It really did feel like anything might happen.”

This, of course, is the crucial point. Twenty years after the initial shock and awe of the Marilyn Manson experience, it no longer feels that anything might happen. This isn’t Manson’s fault; audiences soon grow familiar with even the most unfamiliar of spectacles, and the new remains so for only the briefest time. Marilyn Manson was the last rock artist to emerge before the age of internet democracy robbed music of its place as the vanguard of youth culture. Today, there are just so many other things going on. It is unlikely that a rock star will ever again occupy a place in the mainstream while managing to terrify and revolt entire nations like he did. “I think I’ve lost the freedom of being anonymous,” was Manson’s take on these headiest of times. “I’ve lost the ability to be part of ‘normal life.’ But I think that’s a fair sacrifice for the freedom of expression and the audience that I have.”