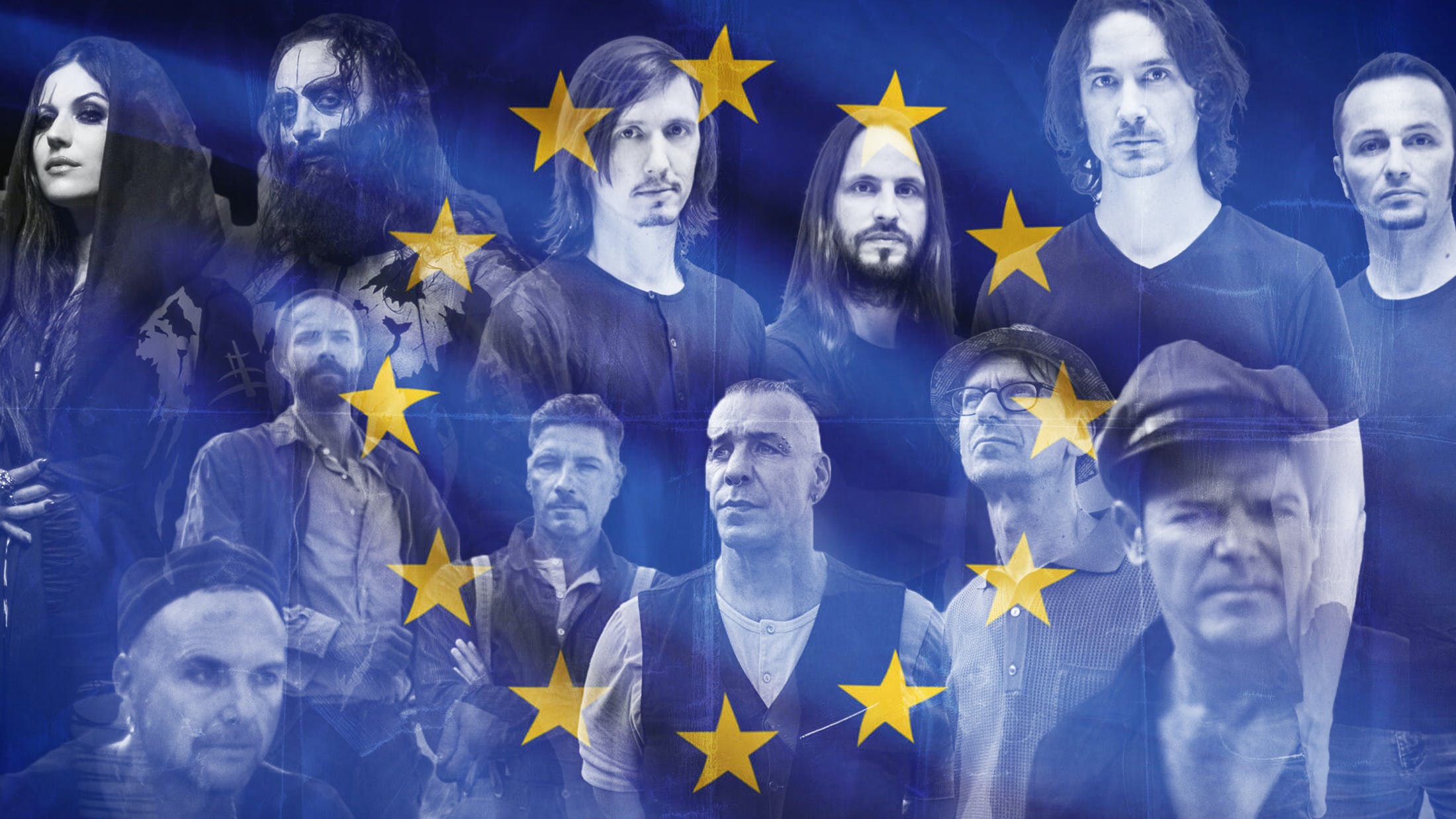 So, it's Brexit Friday. Er, hurrah…

There might be quite a few negatives from the UK deciding to separate itself from one of largest, wealthiest and most vibrant unions in human history. Aside from chucking away our own individual rights to work and travel freely across the continent, we've potentially made it harder for UK bands to tour abroad – and considerably less attractive for their European counterparts to cross the channel in the opposite direction. And that’s before we look at the exchange-rate on the old GBP.

We’ve commiserated enough already, however. Instead, we’ve decided to mark this Black Friday with a celebration of the best rock that the European Union has to offer. From Teutonic freaks and Belgian hard-nuts to Polish Satanists and Danish rockabilly enthusiasts, there truly is beauty in diversity. Populist politics be damned; we’ll all still get together under the banner of smashing beers and banging heads.

There's no shortage of great rock bands from Germany. From power metal (Blind Guardian) to thrash (Kreator) to hardcore punk (Beatsteaks) to straight-out rock (Scorpions), they're perhaps the only country with a roster of bands that could hang tough with the torrent of UK/American output. No band better defines Germany, though, than Neue Deutsche Härte upstarts turned stadium-conquering industrial metal juggernaut Rammstein. Since their formation in Berlin in the mid-'90s, they’ve set the standard for machine-tooled musicality and high-octane showmanship. While most bands would grow rusty after a decade away, their return with last year’s daringly untitled seventh LP proved they’ve not taken a backward step.

Although metal's Great Dane – Metallica drummer Lars Ulrich – will take some catching in the rock superstardom stakes, his countrymen in Volbeat are doing a remarkable job of giving him a little competition. When the quartet emerged out of Copenhagen in 2001, their strange blend of groove metal, hard rock and psychobilly influence seemed to hang together too incongruously to ever garner a large following. Almost two decades down the line, however, with seven hit LPs and the conscription of ex-Anthrax guitarist Rob Caggiano in their rearview, they’ve risen through the ranks to European festival headliner status and appear happy to shoulder the burden of keeping down'n'dirty rock alive in the musical mainstream.

Ireland might be a relatively small nation, but from Thin Lizzy and Rory Gallagher to Kerbdog and Gama Bomb it has always punched well above its weight with rock'n'roll. There are few active acts still as quintessentially Irish as legendary folk black metallers Primordial, however. Emerging out of Skerries in County Dublin over three decades ago – bringing in inimitable frontman Alan "Nemtheanga" Averill as frontman shortly after – their blend of Celtic music’s mournfulness and warmth with the abrasion of black metal has evolved across nine LPs. And, although Primordial's homeland is not their sole focus, tracks like 2005’s The Coffin Ships have beautifully captured the sad history of the Emerald Isle.

When most people think of Belgium, they picture beer and chocolate, waffles, and fries with mayonnaise. The country is also a hotbed for experimental music, with hardcore punks like Ghent’s Rise And Fall rubbing shoulders with Wevelgem grungecore lot Stake (previously, Steak Number Eight). Our pick of a red-hot current crop, however, have to be Leuven prog-punk trio Brutus. Keeping their line-up to frontwoman Stefanie Mannaerts on drums and vocals, bassist Peter Mulders and guitarist Stijn Vanhoegaerden, their albums so far – 2017’s Burst, 2019’s Nest – have bristled with stripped back purpose and adrenalised energy. They’re also one of the most compelling live bands on the planet and definitely worth checking out the next time they crop up at a festival – with beer and fries in hand, obviously.

Research has shown that Finland leads the world rankings in metal bands per capita, with 53.2 outfits per 100,000 residents. From HIM to Turisas to Children Of Bodom to (previous Eurovision winners) Lordi, there's no shortage of outfits to pick from. There’s only one true heavyweight, mind. Current Nightwish frontwoman Floor Jansen might be a Dutch national, but the rest of the band – including, crucially, mainman Tuomas Holopainen – hail from Kitee in the country’s south-east. Celebrating a 25th anniversary next year, they basically changed the game in terms of symphonic metal in the mainstream, with every one of their eight albums thus far having deservedly earned landmark status. Best of all, if 2015’s Darwin-inspired Endless Forms Most Beautiful is anything to go by, they’re still getting better...

Although Dutch caricatures tend to be either sleazeballs or stoners, the lowlands also have a proud tradition of symphonic rock (hello, Within Temptation, Delain and Epica) and machine-tooled thrash (Legion Of The Damned). One of their mightiest and most underrated acts, however, are surely death metal collective Asphyx. Enduring a stop-start existence since their formation in 1987, they initially struggled for momentum, but since 2007 – with the imaginatively-titled Death… The Brutal Way (2009), Deathhammer (2012) and Incoming Death (2016) tucked into their belts – they’ve cemented their status as one of Europe’s most uncompromisingly relentless outfits, both on record and in the pulverising live arena.

For a country that, on all evidence, is as just keen on rock as their Western European brothers and sisters, Italy doesn’t actually have that many massive bands. Not to unreasonably discount the likes of Sacile folk-metallers Elvenking, Tortona power trio Ufomammut, Roman tech-death legends Fleshgod Apocalypse or power metal legends Rhapsody (Of Fire), but only Lacuna Coil truly stand out as an act that managed to break the mainstream. Counting the incredible Cristina Scabbia amongst their ranks since 1996, with an infectious balance of alt.experimentalism and gothic texture, a catalogue flowing from 1999’s In A Reverie to 2019’s Black Anima has kept their voracious fanbase constantly enraptured.

Poland loves its extreme metal – from Vader to Batushka, there are dozens of acts worth your time. In 2020, however, few would argue that the mighty Behemoth aren't at the top of the pile. Over almost three decades, they've dragged themselves up from the Gdańsk underground, overcome frontman Nergal's life-threatening leukaemia and even crossed over to near-mainstream ubiquity in their homeland, with Nergal appearing on the Polish version of The Voice. 2014 masterpiece The Satanist was arguably the metal record of the last decade, while 2018's I Loved You At Your Darkest confirmed that even all this time down the line they're still pushing boundaries.

Modern black metal might've been distilled on icy Scandinavia mountainsides, but it's adapted and evolved spectacularly under the scorching Greek sun. From the serrated edge of Athens trailblazers Rotting Christ via the sheer viciousness of Acherontas to the Hellenic iconography of the excellent Macabre Omen, there’s more meat to sink your teeth into than a particularly bulging gyros kebab. In recent years, however, despite having been around since 1988, Ioannina terrors Varathron (their name translating as 'very deep gorge') have hit another level, blending that traditionally savage sound with a more classic metal sense of majesty, elevating 2018’s Patriarchs Of Evil as one of the most thrilling underground releases in recent memory. Those of a gentler disposition need not apply, but hardened metalheads will find much to love.

We could've picked any of a hundred metal bands to represent the Scandinavian heartland. From Bathory and Dissection to In Flames, At The Gates, Entombed, Arch Enemy, Amon Amarth and Sabaton, that single genre is almost as important a national export as timber and Volvos combined. Instead, we’re shining a light on the country’s thriving hardcore punk community where crusties like Skitsystem and slicker outfits like Raised Fist bookend an impressively broad church. Chief among that group are the legendary Refused. Anyone who’s spent significant time on rock club dancefloors probably already knows every beat of landmark single New Noise from 1998 magnum opus The Shape Of Punk To Come, but you’d be remiss not to check out their output since 2014’s reunion – Freedom (2015) and War Music (2019) – too. 'Can I scream! Woo!'

There's a strange, yet stubbornly ingrained stereotype of the French as passive, high-brow types who don't like confrontation. It’s the sort of image held by people who order Freedom Fries at McDonalds, who’ve never paid attention to footage of running battles amidst political protests on Parisian streets, and, well, who probably got us into this Brexit mess in the first place. Ahem... More representative of the real France are the Gallic metal and hardcore scenes currently flourishing, with acts like Bagnols-sur-Cèze blackgaze duo Alcest, Laval punks Birds In Row and Marseilles metalcore mob Landmvrks ploughing through. Even with such rich competition, it’s impossible to deny the role Bayonne tech-groove-metal heavyweights Gojira have played in getting the scene to where it is today. On the go since 1996 and breaking through properly with 2005’s stunning From Mars To Sirius, they’re only behind the mighty Mastodon in terms of metallic importance and influence in the 21st Century. Keen activists, frequent collaborators and famously open minds, there have rarely been better representatives of those particularly French values: liberté, égalité, fraternité. Brilliantly, there are whisperings that their hugely-anticipated seventh LP should arrive this year, too.