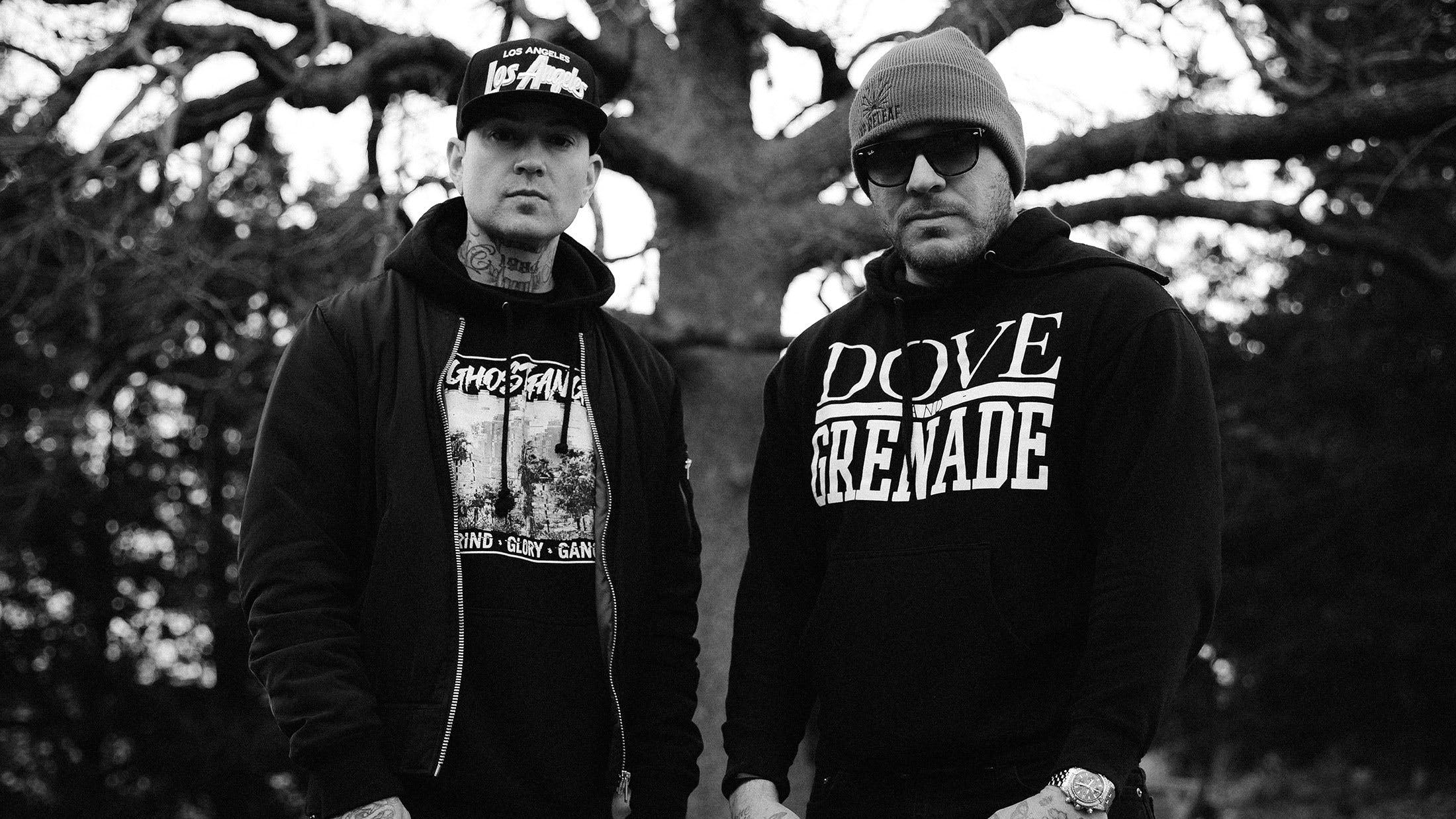 Like the flimsy plywood façades of its sprawling movie sets, Los Angeles’ glitz and glamour conceals a bullet-pocked reality of violence, gangs, dirt and danger. “If you bumped into someone in the street,” Jorel ‘J Dog’ Decker recounts from his childhood spent in the City Of Angels’ seedy underworld, “chances were you’d get a gun pulled on you.” It was this city – not the airbrushed picture postcard image in so many people’s heads – he stresses, that spawned Hollywood Undead.

“My single mother sold jewellery door to door. She was robbed at gunpoint several times and she’d get caught up in drive-by shootings.” The rap-rockers’ mercurial mainman sifts through his memories with a mixture of steely frankness and regret. Every balmy night was punctuated by gunfire, every sidewalk littered with used needles, whacked out junkies and the still-warm bodies of victims of the ‘90s all-time high gang warfare. “It was chaotic,” he says, “but to us, it was normality.”

It was an urban jungle that bound young friends tightly, but which also had its way of corrupting impressionable minds. “We were bad kids,” Jorel laughs of his bandmates, many of whom came up together from kindergarten. “We all got involved in things that we weren’t supposed to.”

READ THIS: How we wrote Undead, by Hollywood Undead's Johnny 3 Tears

It didn’t help that the infamous 18th Street Gang were everywhere. “It was their neighbourhood,” says Jorel, keen not to get too deep into their affairs. “Being around them every day, I started noticing people getting arrested and getting killed constantly. Still, you want to be cool. You want to be down with everybody. Then, all of a sudden, you’re hitting people you don’t even know over the head with two-by-fours, because someone told you to.”

“Maybe people think our music is part of some kind of suburban schtick,” says bassist and vocalist George ‘Johnny 3 Tears’ Ragan, who graduated high school in juvenile hall aged 17 for possession of a firearm. “Nothing’s further from the truth. I’m not gonna shoot someone because they think we’re faking this, but if they don’t believe us, they should come down to our neighbourhood to see it for themselves.”

Music offered an alternative. Their apartment on Franklin and Highland – two blocks from Hollywood Boulevard, with two bedrooms for four people and its own DIY recording setup – became a chaotic hub. “It was a melting pot of people and music,” Jorel remembers. “Skaters, addicts, punks, metallers. There could be a guy with a tattoo machine working in one corner and models from across the hall hanging in another. The carpet was ripped up, and there was spray paint all over the walls.”

Every night was a party, but they almost always ended in violence. Checking out of the chaos might have been possible, but they could never really leave. Jorel remembers running afoul at one house party at La Brea and Adams in the city’s notorious South Central district early on.

“It was a ghetto-ass party and we were a punk band,” Jorel explains. “We had guns pulled on us by the West Boulevard Crips! People were trying to steal our equipment.”

The need to distance the band from that life, however, soon became bloodily obvious. “I grew up around gangs and graffiti,” says Jorel. “With that comes territory.” Beefing with other crews was nothing unusual, but the night 15 thugs jumped his group of friends was an eye-opener. “One of my friends was almost killed. I remember coming to the realisation that this shit is crazy – he almost died, and all for what?

“I began to focus on making music rather than being out there causing problems, drinking and fighting,” he continues. “Around then, that whole situation spiralled completely out of control and a couple of months later one of my friends got murdered over it. Nothing was really the same.”

READ THIS: The 13 most nu-metal moments of all time

Always broke and often near starving, if the blunt bravado – and often lamentable lyrics – of their early output seems distasteful, they make more sense in context of the frustration that was poured into them. “There’s a magic in being so genuinely hungry that can’t be faked,” says Jorel. Even when the band scored a major-label deal with A&M Octone, it was wrenched from an acrimonious back-and-forth with suits demanding censorship. Pessimistically-titled 2008 debut Swan Songs seethed with all the indiscriminate rage of a drive-by shooting.

It was the authenticity of that anger, coupled with their distinctive street art and hockey mask aesthetic, that proved to be Hollywood Undead’s greatest hook, and their record became a platinum-selling success.

“A lot of bands lack that [kind of connection] because they have no real experience of what they’re singing about,” says Jorel. “Our songs are all based on things that we’ve actually experienced. The people who love us really connect with that – it’s a bond that’s not broken very easily.”

Twelve years down the line, these rough diamonds have buffed up to a high shine. On their last UK tour, at a sold-out Newcastle Academy on April 30, 2019, the masks might have been cast aside, but the black shades, muscle-bound bodies and larger than life personalities packed all the swagger of a band on their first album rather than their fifth. A year later, sixth LP New Empire, Vol. 1, arrived.

Ownership – of that gritty past, of their identities, of the future of their art – is everything. Showing their faces – the line-up now completed by multi-instrumentalist/vocalists Dylan ‘Funny Man’ Alvarez, Jordon ‘Charlie Scene’ Terrell and Daniel ‘Danny’ Murillo – was a literal and figurative first step. “We ran out of room to create,” says George. “People think it was an anonymity thing. But really, it was a way to work graffiti into the band. We used to tag down on the LA river. We wore those masks so we wouldn’t get caught on camera. We didn’t want to keep wearing them just for the sake of it.”

“I don’t think people loved our band because we wore masks,” Jorel says, “but I do think people hated our band because we wore masks. I get it. If I saw another band rapping and wearing masks, I probably wouldn’t give them the time of day either. It was just the natural progression: take them off, set gimmicks aside, progress as musicians and artists. The definition of insanity is doing the same thing over and over and expecting a different result.”

“We used to have to run from the cops,” George says, proudly. “Now, we’re having lunch with guys with half a billion dollars in the bank because they’re investing in our operation. It’s a good reflection of where we came from and where we are now.”

“We talk about it, sing about it and smoke it,” says Jorel. “So it made sense to tie it into the band. It’s part of the environment we grew up in. Our friends have been selling weed to feed their kids for as long as I can remember. There are parallels in music. Sometimes the world will think what you’re doing is dope, sometimes they’ll think it’s ridiculous – or illegal.”

The rough-edged, hard rock inflected sounds of New Empire, Vol. 1 see them doubling down. “We just started writing heavier shit,” says George. “People get more serious with age,” says Jorel, reckoning the sonic and thematic weight in these songs is a reflection of that on their shoulders. “I’m not going to talk about pulling my dick out for the rest of my life.”

Fresh horizons are opening up, too. “It’s less that we’re rebranding ourselves than rebuilding,” Jorel smiles. “We’re doing better than ever now, but it’s taken us 10 years to get here. We’re building a new empire, with D&G, the new record, and the new heavier sound. After a decade of being shit on, we are where we’re supposed to be.”

“It’s symbolic of how far we’ve come,” George concludes. “As [German philosopher] Friedrich Nietzsche said, ‘Everyone who has ever built anywhere a new heaven first found the power thereto in his own hell.’ I never thought I’d be alive today, let alone in this position. I have nothing but gratitude for those fans who love our music. They pulled us out of the gutter.”