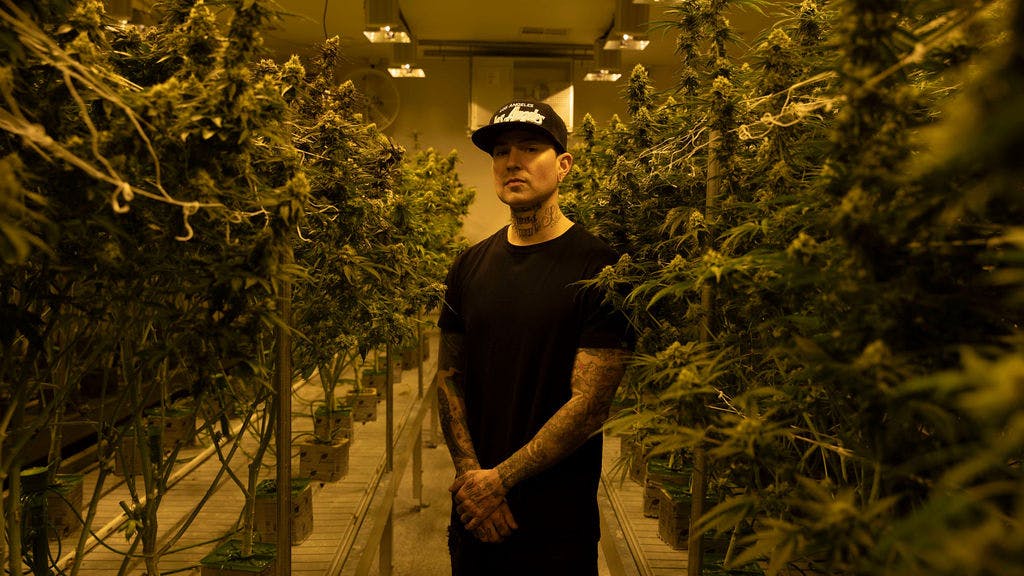 It all started around 2015 when I rented a warehouse in Los Angeles to grow weed inside of. This was a pretty big place, like 5,000 square feet, and when the owners asked me what I was going to use it for, I said it was for the band to store merch and equipment. I took all the money I’d made from touring at the time, and invested it into growing weed in this warehouse. It was a lot of money, around $100,000.

The whole process took about six months of non-stop work before I was in the position to harvest. Then it came time for me to use a broker to sell the weed. It all works on the black market: you find someone to be your broker, they go off and sell it and bring you the money back. The issue with that, though, is that you constantly run this risk of them getting robbed or something going wrong.

Getting into this kind of thing is always a gamble. People get robbed, grow houses burn down – it’s very dangerous. The market fluctuates a lot, too, because when there are big fires in California a lot of the outdoor-grown weed gets destroyed, but the demand is still there. Prices go up, and then more people get robbed. I know one guy who recently came from out of state to buy weed, and he got the shit beat out of him and ended up in hospital. The black market for cannabis in California is way bigger than the legal one, to the extent that I’d estimate that 80 per cent of the market is illegal. In this business, you deal with thugs on a daily basis and your deals are done behind supermarkets at night. That’s just the way it is.

So we get to the first harvest and I give 30lbs of weed to my broker – that’s roughly $60,000 in value – and she’s like, ‘I’ll have your money tomorrow.’ Everything was going perfectly, and that night I went to this Halloween party that a bunch of other bands were at. I’m dressed as a vampire just having a good time and getting shitfaced, and then I get a phone call explaining that my broker just got jacked at gunpoint by 18th Street, who are a gang based out of LA.

My first reaction is just ‘Fuck.’ I run out of the party – still dressed as a vampire – and I’m making all these calls trying to figure out who took it. I’m literally stood there in this costume while I’m calling different gangs and dealing with all this gangster shit. The result of this is that I’m $60,000 down.

It’s my understanding that my broker was set up. The way it works is that someone will say they want to buy a small amount of weed, so you go meet them and do the deal. Then, they want a little more, so you meet them again. Then, they make a really large order, you go meet up and a third party robs you – it’s all planned, but the buyer makes out like they’re not involved. That’s what I believe happened in this instance. I know plenty of people who do set ups like that, and it’s basically the case that if you get robbed while doing a weed deal, 99 per cent of the time you’ve been set up. This wasn’t the first time I’d been robbed, and it won’t be the last.

The next day, I go and meet her and her boyfriend in a park so I can hear her side of the story. Then, some guy sits down at the picnic table next to us and pulls out a violin and starts playing what has to be the saddest song I’ve ever heard. My broker is there crying while this guy is soundtracking the whole thing with his violin, and I just had to laugh at the absurdity of it all. I said to her that we needed to make this right and I needed the money, so she then had to drive all around the country selling someone else’s weed in order to make the money needed to pay me back. Weed is worth more on the East Coast, which is why she went out there, but if her and her partner had got caught while travelling, they’d have gone to prison for 10 years.

I’d had stuff go wrong in LA before, too. I had a different warehouse which burned down that took 33 firefighters to put out, and the only thing that kept me out of going to jail for that was the fact that the riots had just happened. I was very fortunate that the cops were just too busy dealing with half of LA burning, because they knew it was a grow house – they saw the plants and everything, and could’ve pressed charges – but there was so much else going on at the time. They asked a few questions, no-one gave up my name, and thankfully things just moved on.

It’s impossible for someone like me looking to sell weed to operate legally in California, which is why I’m now based in Oklahoma. In California, you need to invest millions just to get on the playing field, and even then it doesn’t guarantee success – the politics are too corrupt. It’s $1,000,000 just for a license to grow weed there, whereas in Oklahoma, it’s $2,500.

Thankfully, in the case of this specific deal which I’ve been talking about, I did get my money back. I was very grateful to the broker and her partner for putting themselves at risk in order to sort things out, even if it did take six months for me to recoup the money. It’s worth me mentioning, though, that this same broker did get robbed while working for me a second time, and in that case I just dropped it, because by then I was in a better position financially thanks to Hollywood Undead, so I just walked away.

Now, I’ve transitioned into the legal market, because no-one wants to live looking over their shoulder every day. I also really don’t want to end up with a felony, because I know that’s stopped Ronnie Radke of Falling In Reverse from touring outside of the States. My operation in Oklahoma is about 20,000 square feet in size and has over 300 grow lights – millions of dollars has been invested into it, and I’m really happy with how it’s going.