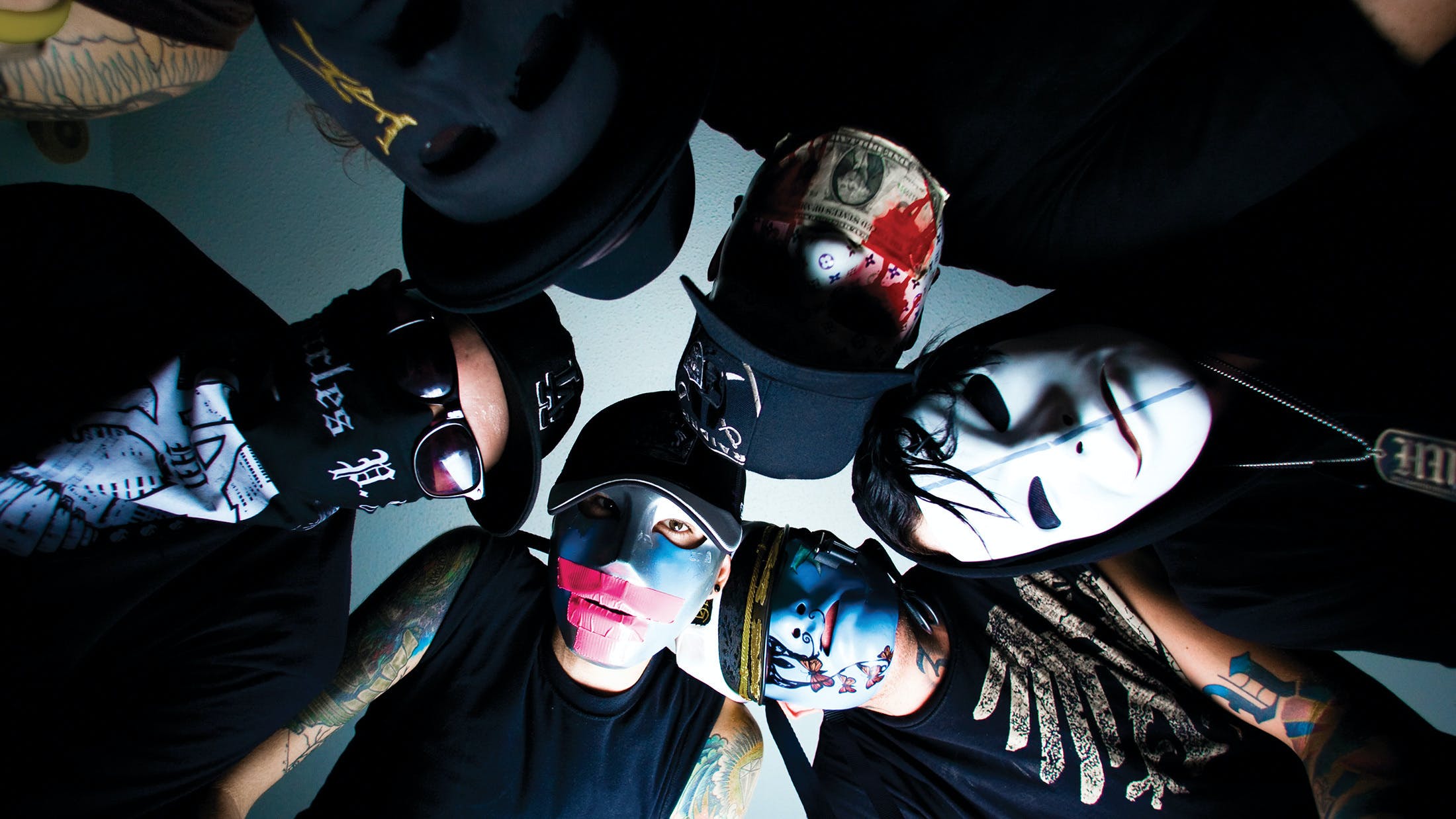 By the late ‘00s, nu-metal had long since been and gone. From the grit and grime, violence and crime of Los Angeles’ meanest streets, however, a band of hustlers weren’t about to let anything as fickle as fashion dictate the direction of their sound. Fused in The City Of Angels’ curious melting-pot – where glam-metallers, wannabe rappers and very real street thugs rubbed shoulders on the daily – Hollywood Undead’s music was less a continuation of the sound benchmarked by local heroes like Korn and Linkin Park than a new strain, vividly reflecting their own gritty existence.

In many ways, that existence was ugly. Lyrics like 'Johnny's taking heads off of all f*ggots who hate,' aren’t the product of refined upbringing. But an ugliness was also present in a post-millennial music industry, where the internet hadn’t yet realised its liberating potential, and record-labels still chewed up and spat out any fledgling outfit unable to adhere to their specific vision. When Undead’s pessimistically-titled debut LP Swan Songs eventually emerged on A&M Octone in 2008 – its creators hidden away behind masks – it seethed with rage, aimed not only towards the brutalities of life on the edge, but the perceived strongarming of the execs liable to get rich off their cracked genius.

Vocalist and bassist George “Johnny 3 Tears” Ragan explains how, for better or worse, having their backs against the wall sparked his band’s defining moment…

“In many ways, Undead was the sound of our frustration. It was written at the point where we’d just come into the corporate side of the music industry. We’d come so far, from being little street kids telling our street stories to being signed to a major label. We began to think that we’d made it, but the funny part is that’s actually where the difficulty really started.

“The writing-process came about after the rejection of that first album we’d turned-in. That was so disagreeable to us – in every sense. It was the moment our frustrations boiled over. Looking back, there’s obviously a lot of anger in there. We basically wanted to do a drive-by on the A&R guys because we were so pissed off. It was almost like an invalidation of the success you had to begin with: just very, very tough.

“You can’t handle a problem with lawyers out on the street the same way that you handled things growing up. I didn’t have a million dollars to go hire a lawyer; I didn’t even understand what the lawyers were talking about! All of a sudden you find yourself in this grid and you can’t get out. We thought it was our music, and we had the right to say when it came out. But then they point to some clause in the contract and remind us that we can’t do anything until they tell us to. Anything we did, they owned.

“Granted, it was our fault. We were the dumb kids who signed the piece of paper, but we didn’t have anything else. We were all poor as shit and could barely even feed ourselves. When someone hands you half a million dollars, you’ll sign anything they put in front of you. And we did. It’s kind of like the deal with the devil himself. We thought we were signing something that was going to give us freedom; we were actually signing something that effectively put us in a prison.

READ THIS: The 12 most iconic nu-metal lyrics

“Undead’s lyrics (for example: 'Look up and see that motherfucking writing on the wall/When you see J3T thirty deep, he's down to brawl/Fuck all haters I see 'cause I hate that you breathe/I see you duck, you little punk, you little fucking disease') came from our understanding of the trade we’d made and feeling that betrayal. The first thing you better learn is none of these guys are your friends. They’re looking out for themselves. No-one is looking out for you but yourself. Unfortunately, we found that out the hard way. You have this innate sense of trust for them when you’re young because you think that they know something that you don’t. But there are snakes in suits everywhere.

“At the same time, it’s not some airbrushed pop song. The part that is the most bizarre – the most ironic – is that you write this song in defiance of the record label and the music industry, and it’s the song that they use to have commercial success. That’s the thing about that song that’s always felt hilarious to me. We make this track to say ‘Fuck you!’ to the label and they just use it to make the most money. If that doesn’t bite you in the ass I don’t know what will.

“It was a backburner song, too. We never thought it was going to be big for us. The label never thought that was going to be a single. We never even thought it would even be commercially acceptable. It’s five minutes long, it’s got every cuss-word you can think of in it, i’s got every piece of violent imagery you can imagine, and it’s actively targeted at the group of people who got fat off the back of it. It’s funny to me now, knowing what I know. It shows just how good those record labels are: they’ll take everything you can throw at them and use it against you.

“Over the years, I’ve come to see how the song has come to define this band, but I don’t necessarily like it. I love the song – I have no problem with the song – but I feel like, artistically speaking, we have written songs that are much better, that have much more depth to them, and that are much more important to us as people, about love and loss and those more important aspects of life. It just so happens that the song that means so much to everyone else is a song about getting drunk and beating the shit out of people!"