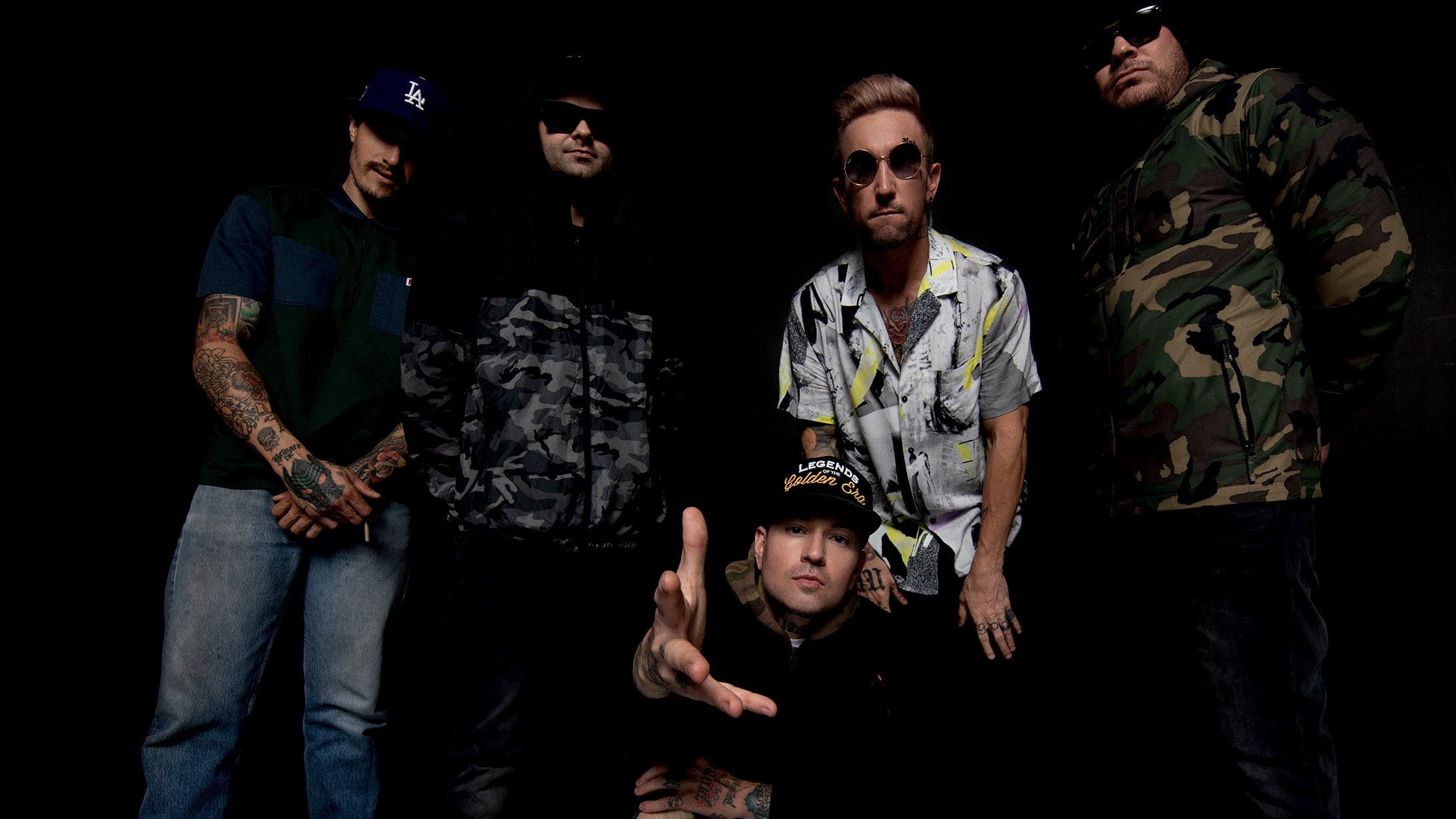 Having started life as LA street rats, Hollywood Undead have pulled themselves up by their bootstraps to platinum-selling success and esteemed ownership of fast-growing cannabis brand Dove & Grenade. With sixth LP New Empire, Vol. 1 recently hitting shelves, we introduce mainman Jorel “J-Dog” Decker to Kerrang!’s 13 Questions, who's quick to show that the hustler spirit still lives…

Why should people check out New Empire, Vol. 1?
“Because it’s super dark and gothic. It really expresses how we feel on the inside. Our band might look like a bunch of pussies on the outside, but we’re really dark on the inside. Not me, obviously; those guys!”

When you were a kid, what did you want to be when you grew up?
“I wanted to be doing exactly what I’m doing right now. To be a musician is really all I’ve ever wanted. I guess it worked out how it did for a reason. When I found out I sucked at playing instruments, I learned how to rap and do all the other [electronic] shit I do. I would’ve preferred to have been Bruce Springsteen or something, but life dealt me a different hand. I’ve played the hand that I had.”

READ THIS: The 13 most nu-metal moments of all time

If your house was on fire, what one thing would you save?
“My cats! I have four of them: three rescues and one Savannah, who’s like four feet long. She loves music more than I think any dog ever could! They’re called Lucifer, Salem, Malachi and Tiger. I don’t really believe there’s any connection between witches and the occult and cats. I think that most of that is a fable constructed by man. I do believe that they’re old souls with something spiritual about them, though. Am I a fan of Sabrina The Teenage Witch? Yeah!”

Where’s the best place you’ve ever been?
“I love Prague in the Czech Republic, personally. I’ve gotten to visit there a lot. It’s such a beautiful city, but it’s also the number one beer-drinking country in the world per capita, so it’s just a good time. There’s beautiful architecture, there are underground jazz clubs in old World War II bunkers, and it’s full of beautiful women. To me, it’s the best city on Earth. It’s a big contrast to Los Angeles. Maybe it’s because I grew up here, but LA seems very dull. There’s not a lot of old culture; everything is new!”

What happens when we die?
“I believe in reincarnation, personally. I’m not even sure that our souls – or whatever you want to call them – are necessarily even tied to this planet. I believe that you could end up elsewhere in different shapes and bodies. I don’t believe that our souls are tied to the human race in any way. What would I like to be reincarnated as when I die? Skrillex!

What would you like it to say on your gravestone?
“‘Here lies the guy who watched Skrillex do dubstep in a tour van and told him he was wasting his time…’ I was so wrong. We took his other band out when they were young, and I remember sitting there listening to him playing dubstep on his laptop and saying, ‘Dude, what is this shit?! It’s weird as fuck! I don’t want to be a dick, dude, but I think you’re wasting your time!’ I thought it sounded like a DSL modem having a heart attack. He liked it though, so in the end I thought it was cool. But I was so, so wrong. He blew up to another level!”

What is your biggest fear?
“My greatest fear is being older and broke. That may sound shallow, but to some extent both of my parents went through it and I saw what it did to them. I don’t want to be struggling as a parent. That’s one of the reasons I work so hard at what I do. I think it’s probably a more common fear amongst musicians. The problem with us is that you dedicate your whole life to something that simply isn’t guaranteed. In fact, the odds are stacked against you. You can blink your eyes and all of a sudden you’re 30 years old with a family and kids but no job or skillset. You can play the guitar like a motherfucker, but the world doesn’t give a shit. My heart goes out to every musician who takes that huge gamble pursuing the thing that they love.”

READ THIS: How Marilyn Manson became a hip-hop icon

What is your worst habit?
“Drinking and puking on the bus, then blaming it on somebody else. It could be worse. One of the guys in my band pees his bunk when he’s drunk…”

Do you believe in ghosts?
“They don’t scare me, but I definitely believe there is some weird shit going on out there. I believe in aliens and ghosts: all that shit. My old apartment was haunted as fuck! People would just come over and tell me that. There were slamming doors and everything! One time when I was a kid growing up there, my mom took us all outside because she insisted there was someone in the kitchen. The cops turned up and the door was closed, with no-one there at all. People kept telling me stuff like that for the next 15 or 20 years! Also, [Johnny 3 Tears, vocals] in my band grew up on the other side of this cemetery in Los Angeles called Forest Lawns, and he’d tell us about all this weird stuff, like papers just randomly floating around [even on still days].”

What’s the worst injury you’ve ever suffered?
“Getting pistol whipped! That shit hurt like fuck! I got hit on the back of my head and there’s still a lump there. It happened because of the same old shit. Me and my friends were out drinking, we got pretty drunk, then one of them said some stupid shit to some girl. One of the guys walking by got pissed and a scuffle broke out. Then, one of the other guys just pulled out a gun and hit me over the head with it. That stuff was what you dealt with on a daily basis in LA. It wasn’t fun, but every time you left the house to go out drinking on the street, it’s kinda what you expected…”

Who is the most famous person in your phonebook?
“Benji Madden! I’ve known Benji for a while now. He’s one of those guys who supported our band, right from day one. Back in the day, when we were a bunch of drunk shitheads, he’d always still think we were cool. He would invite us to these prestige nightclubs where he’d be DJing, where you had famous actors and models all over the place. We had no business being there. We had no money for drinks. Five out of 10 times, we would get into fights. But he had a bunch of friends who were straight-up gangsters as well, and we always got along with them, so he’s had nothing but love for us since the start. He’s always supported our band and really helped us get our last record, Five, out. We still talk all the time!”

READ THIS: How we wrote Undead, by Hollywood Undead's Johnny 3 Tears

If you had the power to turn the internet off, would you do it?
“Fuck yeah, I would! It’d probably ruin my business, but I don’t give a shit. I’d shut it off for good. I think it’s made people too entitled. I believe that everyone is entitled to their opinions, sure, but I don’t believe that everyone should voice them. The way I grew up – the way that most of us did – was that you should always think before you speak. If you say something wrong, you get the shit kicked out of you. I was a little dumbass, saying stupid shit growing up, but when I did I would get socked in the mouth by one of my friends. That makes you think twice. Nowadays, it seems like people don’t think at all. I’ll see someone in person and call them out for something they said online, and they’ll backtrack like crazy. But then they’ll be on there again the next day saying the very same things!”

What is the funniest rumour you’ve heard about yourself?
“It’s funny when girls say I have a little dick, because I know that’s not true!”