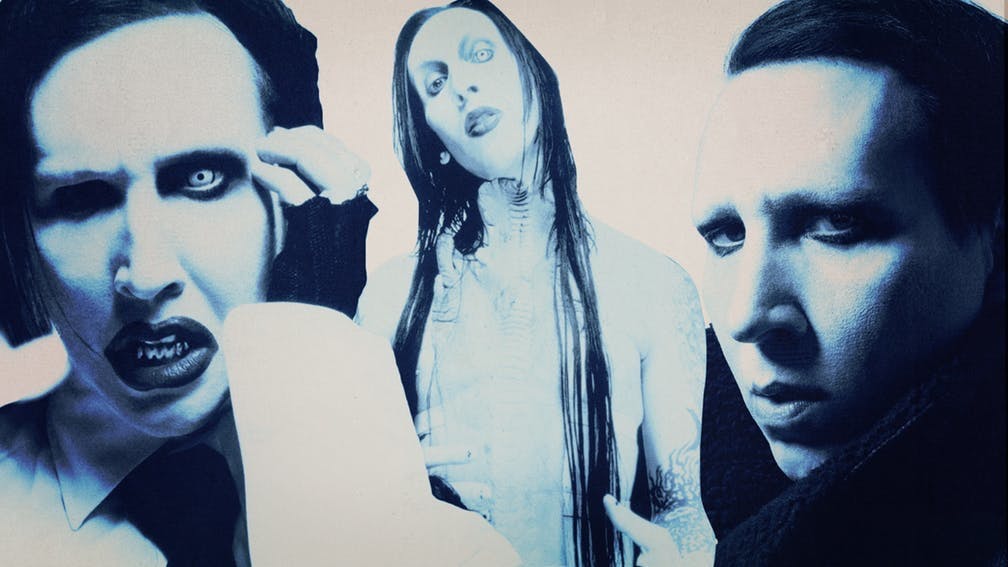 It’s odd to think that Marilyn Manson turned 51 in 2020. Brian Hugh Warner has been around forever, surely, yet the idea of him being middle-aged is oddly jarring. It feels like he should either be 21 or 201.

He’s always had the capriciousness of a young man, going out of his way to needle and provoke — but at the same time there’s something kind of eternal and elemental about him, perpetual and magical, like a mischievous warlock out of time, swilling absinthe and cheerfully enraging parents. The great thing about ensuring you stick out means you could belong equally in any era – he freaks people out now, he’d freak people out in Victorian times; send him into the future and he’ll freak people out then. Happy half-century to the eternal weirdo, the never-normal, the antichrist superstar.

He’s had a lot of looks in his five decades, hasn’t he? Join us on a visual journey through the always interesting life of The God Of Fuck.

The young Manson of the Portrait Of An American Family days is a less polished version than the one we’d later get. He’s a big-hatted, bright-stockinged pantomime villain, all fancy dress and Technicolor gurning. Visually it’s all a bit more DIY than his later incarnations, more resembling the results of a really overexcited trip to Camden Market than the high-end, tailor-made, Hollywood-quality outfits that would come later.

Suddenly Manson is physically imposing, less jester-like and more threatening, leering into the camera, writhing around violently, riding a pig, seeming dangerous and unhinged – no longer a glow stick clown but a self-mutilating maniac. Dave Stewart of the Eurythmics (who did the original version of the song) said this video was one of the scariest things he’d ever seen. Manson appears in a tutu and wedding dress, the beginning of a lot of playing with performative gender identity – not something one saw a lot of on television in the 1990s.

Bound, on stilts, using surgical equipment as accessories and sporting disturbing prostheses, this bandaged, shamanic, terrifying figure was the first a lot of people saw of Manson, as the lead single from Antichrist Superstar blew up massively. Unsettling, not quite human and frequently wince-inducing (that thing on his mouth, woof), Floria Sigismondi’s video introduced the world to a truly creepy-looking individual.

The video for Long Hard Road wasn’t shown on television a lot due to the social mores of the time, objections to blasphemous imagery and fairly non-progressive views on gender-shifting. However, Manson’s hair is so extraordinarily beautiful in it that it should have transcended all broadcast rules. Clad in the cymbal-like bustier of an ectomorphic Brunhilde or an Amanda Lepore-esque striking sexual Valkyrie, his glorious locks are a sight to behold. Or maybe it’s a wig.

Simultaneously sexless and hyper-sexual, the be-breasted, genital-less figure Manson strikes here, complete with toucan-like makeup, straddles the uncanny valley, occasionally seeming more like a CGI construct or a special effect than a man. The video partly functions as a homage to Nicolas Roeg’s The Man Who Fell To Earth (starring David Bowie, another keen provocateur who enjoyed blurring gender lines and shocking with his art).

A shirtless dictator, uniformed yet half-naked, in both latex and warpaint, Manson is a creature of contradictions. Embodying a public figure yet clad for very private activities, he’s sporting painstaking, intricately applied, millimetre-perfect makeup yet also embodying total chaotic energy, making it seem impossible that he could possibly sit still long enough to get dolled up.

Hip-hop influences started to make themselves seen on Manson around this time, from his choice of sunglasses to his awesome big open anorak. Also of note: despite being liberally covered in tattoos, the calligraphy-like Ms on his neck are makeup. Why would a man with dozens of tattoos have fake tattoos applied for a music video? To keep us guessing.

In adopting suits and ties, Manson may have been acknowledging his status: no longer an outsider but a member of the rock establishment, a powerful force within music, essentially The Man. Also, he was 35 by this point, and a man’s mid-thirties can do some strange things to his naked torso.

A lot of Manson’s visual incarnations have made him seem more than human - prostheses, stilts, editing tricks and other things being used to create a larger-than-life figure. 2012’s version trades the flawless makeup for smudged lipstick, smeared inelegantly across the exhausted, pained-looking face of the suddenly very human, newly fragile Manson. He looks like a hangover in human form.

48-year-old Manson cuts a different figure to the lithe, frantic, slender nymph of his youth, but with age comes a new type of anger, the hardened, sickened glare of the man who’s seen it all. Flashes of sky-blue emphasise the new droops in his face, the lived-in physiognomy of a man who has done enough wild shit for a hundred lifetimes, a scarred deathless ghoul in a fuck-off trenchcoat, shirt collar stained with makeup, an aging gangster weary with disdain but alive with fire. Here’s to the rest of the century, Manson, you beautiful fascinating maniac.