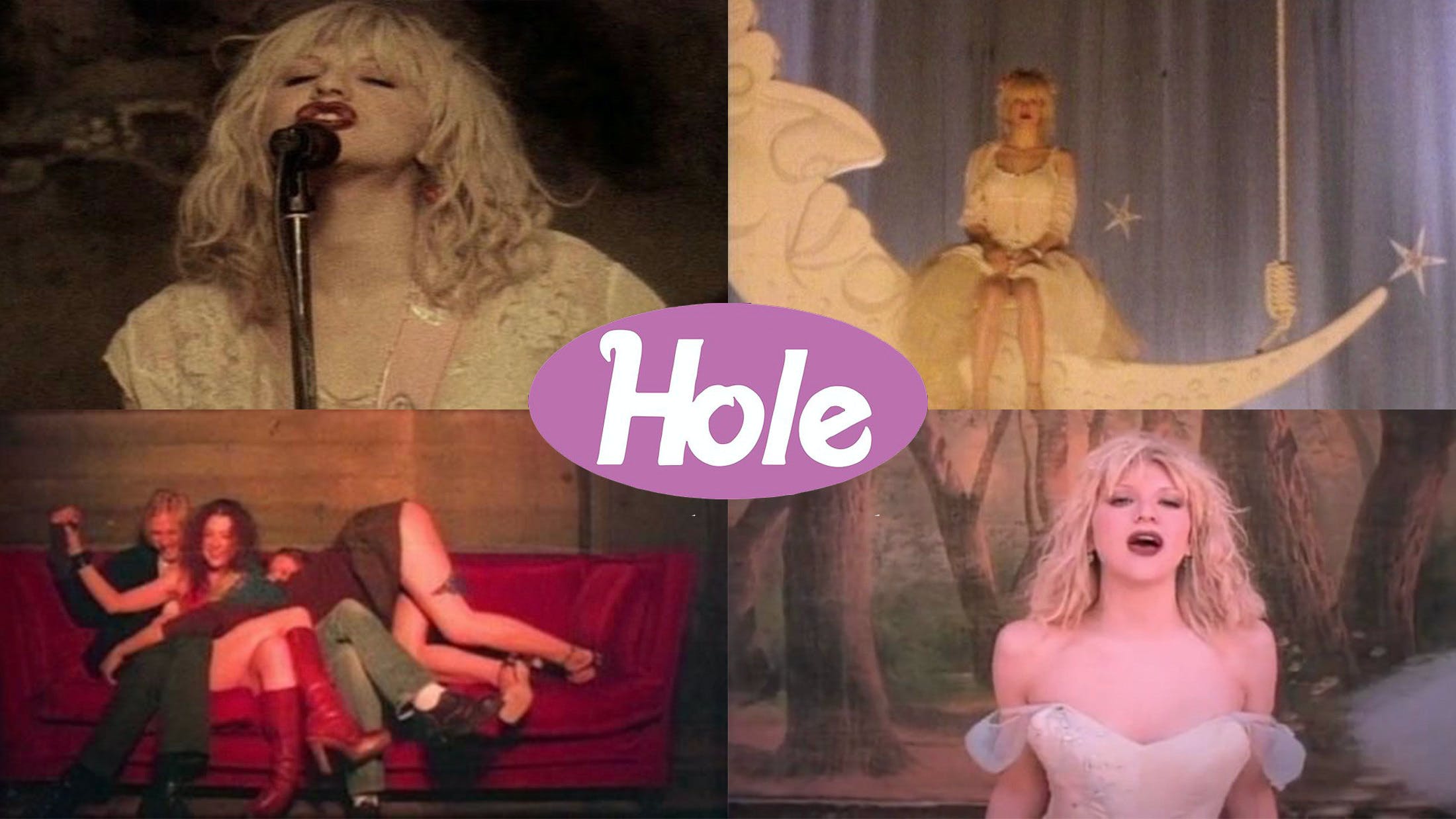 You know who gets given way too much shit? Courtney Love. She’s done loads over the years – not only as the frontwoman of Hole, but as a solo artist, writer and actor.

She’s a fan of both grindcore and Rudyard Kipling, one of the only rock stars to have ever written a manga series, has modelled for Yves St Laurent, was nominated for an acting Golden Globe for The People Vs. Larry Flynt, has exhibited paintings, inspired a generation of women to pick up guitars and became a feminist icon.

But, thanks to her marriage to Kurt Cobain and his untimely death, her colourful personal life and struggles with substance abuse, she’s perpetually subjected to torrents of abuse.

We should treasure Courtney Love. She’s somehow been cool as hell for 30 years, is eternally interesting and is a capital R, capital S, Rock Star. She’s so much more than someone’s widow.

0.02
It’s quite unusual for a mid-’90s music video to begin with a title card. It’s a bit more common now when YouTube is the main place a video will be shown, but in the peak MTV era most avoided interfering with the on-screen text that would appear at the beginning and end of each clip.

This is the first song on 1994’s Live Through This, Hole’s second album, which came out a week after Kurt Cobain’s death.

0.05
There’s Courtney Love, there, sitting on a swinging moon. She wrote this song in 1991, after Love had come out of a troubled relationship with Smashing Pumpkins frontman Billy Corgan (and just after she had met Kurt Cobain). In 1995, appearing on Later With Jools Holland, Love introduced the song with “This song is about a jerk. I hexed him, and now he's losing his hair." Corgan once sported flowing locks, and is now of course as hairless as Dr Evil’s cat. Despite this, Love and Corgan reconciled for a while in 2006, which later led to legal troubles when some songs they wrote together were used on Love’s solo album Nobody’s Daughter in 2010. Love came out of the whole thing much better than Corgan – while she apologised for using the songs without permission and was cordial through it all, Corgan came across terribly, saying in an interview, “I have no interest in supporting her in any way, shape or form. You can't throw enough things down the abyss with a person like that."

0.14
Throughout the video we jump between shots of two types of dancers – young ballerinas and 1920s-type strippers. There’s a bleak, compelling, heartbreaking central idea in using skills learned in gleeful ballet lessons in adulthood to titillate a leering, exploitative audience. Love herself took ballet lessons as a child and later worked as a stripper in Portland from the age of 16 (illegally, following emancipation from her parents), and later in Taiwan and Japan.

0.17
Love would sometimes change this line in live shows to 'And the stars were just like little fists'. There has been speculation that the fish in the original line could be a reference to the star sign Pisces, shared by both Corgan and Love’s new beau (at the time of the song being written) Cobain.

0.23
These two lines are a kind of ironic reappropriation of unhelpful, victim-blaming advice given to women who suffer sexual assault. It’s a subject Hole have sung about on other occasions, like in Asking For It.

0.41
The interlude 'Might last a day, yeah, mine is forever' seems to be about post-traumatic stress disorder, often suffered by victims of violence.

0.50
The strippers in the video are real employees of Jumbo’s Clown Room in LA, selected by Love herself, who briefly worked there in the 1980s.

0.54
This was the first the world saw of Melissa Auf Der Maur, who was also briefly later in Smashing Pumpkins. Former bassist Kristen Pfaff – who is heard on the album – had died of a heroin overdose earlier that year, at just 27 years old (just a few months after Cobain’s suicide at the same age). Auf Der Maur has also released two albums of solo material, briefly fronted a genuinely awesome Black Sabbath covers band called Hand Of Doom, and runs an arts centre.

1.02
Guitarist Eric Erlandson co-founded Hole with Love in 1989. He is a descendant of Martin Luther, founder of the Protestant church. He was briefly in a relationship with Love, and was romantically involved with Kristen Pfaff when she died. He is also a poet, photographer and sculptor, working on what he describes as “psycho-sexual trigger art”.

1.07
Drummer Patty Schemel was introduced to Love by Kurt Cobain, who had narrowly picked Dave Grohl over her when replacing departing Nirvana drummer Chad Channing. She left Hole in 1999 during the recording of Celebrity Skin due to drug problems, and spent some time homeless. She is now healthy and sober, and when not drumming, runs a dog-walking business and kennel. A documentary about her, Hit So Hard, was released in 2012. If you live in LA, own a dog and fancy having a genuine rock star walk your hound, rates begin at $25 a walk.

1.16
Love cites acid flashbacks and old film stock as inspirations for the aesthetic of the video. On Canadian TV show TheNewMusic, she said "I love old pornography, but I wanted to at the same time, you know... all of the videos for years that have put stripping or half-naked women on a pedestal, I wanted to sort of show the degrading experience that it is." The finished video is the work of portrait photographer Mark Seliger and Rolling Stone art director Fred Woodward, who continued to work together for several years afterwards, making videos for Lenny Kravitz and Sarah McLachlan among others, as well as loads of adverts.

1.32
The reference to being 'the one with no soul' is a lyrical nod to a song by shock-rock band Mentors, Sandwich Of Love, in which they sing about the contempt they have for a woman they have group sex with – they were a real dick band. Mentors lead singer Eldon Hoke later claimed he was paid by Love to kill her husband. He died in 1997 after being hit by a train.

1.47
Love is hitting herself here, which ties in with how she once described the song, saying of Violet “This is a song about getting the fucking shit beat out of you and loving it.” There’s a live version performed on Saturday Night Live, in which Love includes a few lines from another song about domestic violence, He Hit Me (It Felt Like A Kiss) by The Crystals, which Hole later covered in its entirety on MTV Unplugged.

2.27
Fun fact: A young Love appears in the background of the Ramones’ awesome video for I Wanna Be Sedated. She’s the one in the wedding dress.

3.09
Love’s way of dressing, combining smeared makeup with ‘pretty’ dresses, was was dubbed, slightly problematically, ‘Kinderhore’ by the media. "I would like to think, in my heart of hearts, that I’m changing some psychosexual aspects of rock music. Not that I’m so desirable. I didn’t do the Kinderwhore thing because I thought I was so hot. When I see the look used to make one more appealing, it pisses me off. When I started, it was a 'What Ever Happened to Baby Jane?' thing. My angle was irony."

3.31
There we go. A weird thing to think about is, Courtney Love possibly doesn't remember making this video. She claims to remember almost nothing about the period of 1994 to 1995 due to a combination of heroin and Rohypnol (used to help her sleep). Shame she doesn’t remember it, it’s a good video!