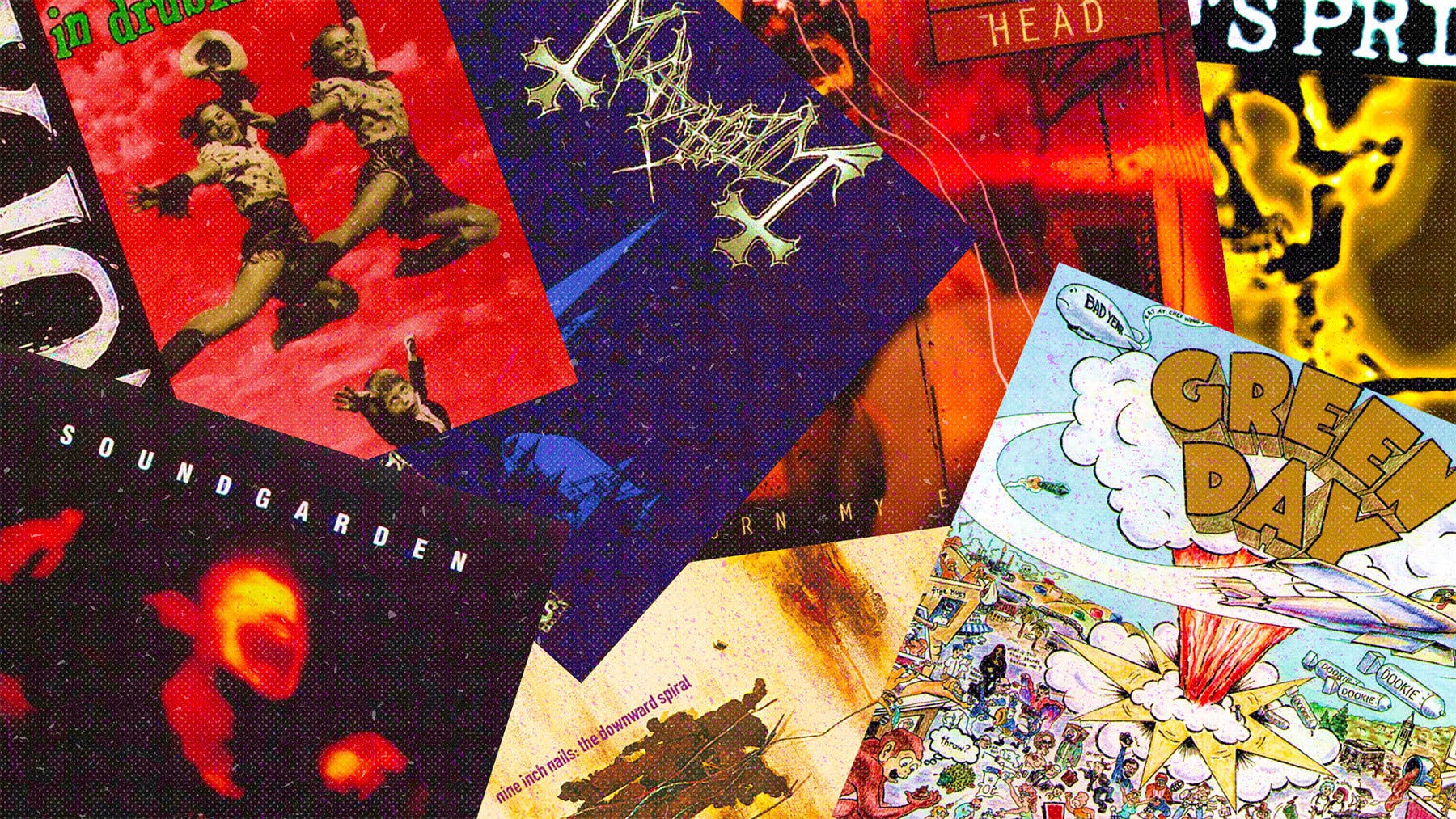 If the first instalment of Netflix's new horror trilogy Fear Street is to be believed, 1994 was a year of murder, mystery and malevolent forces. Here at slightly less-spooky Kerrang!, however, we know it to be a year superb albums that spans genres – from pop-punk to rave-rock to black metal – and remain classics to this day. Not that anyone knew it at the time.

The cover of the June 1994 issue of punk bible Maximumrocknroll was characteristically blunt: a gun jammed in a mouth, with the tagline, ‘Some of your friends are already this fucked’. Inside, a now infamous essay by iconoclastic musician-producer Steve Albini, The Problem With Music, imagined wannabe rock stars struggling in a trench of “runny, decaying shit”, at the behest of their craven paymasters.

The subtext was painful and obvious. 1994 had begun with news that Nirvana would headline that summer’s Lollapalooza, the anarchic travelling festival that had enabled many acts’ assault on the mainstream – a victory lap for the band who’d inaugurated this underground uprising. But in April, after a Rohypnol overdose had scuppered the group’s European tour for their howling, brilliant third album In Utero, Kurt Cobain placed a shotgun to his chin and took his own life.

Grunge would scarcely outlive its poster boy. The bleakness of Soundgarden’s just-released masterpiece Superunknown suggested the internal tempests that would derail the band an album later. Pearl Jam’s Vitalogy, released that autumn, was an often brilliant mess that revealed Eddie Vedder’s emotional turmoil. Alice In Chains’ acoustic Jar Of Flies EP highlighted their burgeoning maturity, but Layne Staley was already in the grip of the addiction that would end his career, and his life. Meanwhile, many of those signed in the wake of the ‘grunge goldrush’ had already received marching orders from corporate bosses who preferred groups like Bush, who lacked cred and critical kudos but were unashamed to cop Nirvana’s sound.

The dream – that the energy and the creativity that had percolated within the underground could somehow prosper in the mainstream – seemed to be over. Where could hungry rock fans look now for their thrills?

How about everywhere? Because if 1994’s news headlines spelled out a grim era for heavy music, the albums released that year told an altogether more inspiring story – one of scenes reaching fruition, and groups fulfilling promise they’d barely hinted at. The phenomenon held as true for Bay Area punk, as for the wastelands of Norwegian black metal, as for the murky industrial scene – a sense of myriad saucepans reaching the boil, simultaneously.

The biggest story was Dookie, catapulting three snotty San Francisco punks into the same multi-platinum, heavily rotated stardom that had so recently wrecked Nirvana. While few predicted Dookie’s unit-shifting success, its radio-friendliness was impossible to deny. Like Nirvana, Green Day played pop songs, albeit cloaked in distortion and maximum decibellage, and delivered in a voice pungent with disdain and stinging wit.

Also like Nirvana, Green Day hadn’t evolved in isolation, and their breakout turned a spotlight on California’s fiercely independent punk-rock movement – fortuitously, as many of their contemporaries cut their finest records. The Offspring were the first to follow, the then-unknown group’s third album, Smash, propelled by hit singles Come Out And Play and Self Esteem to sell a staggering 11 million copies, making it the biggest-selling independent album of all time; these profits gratefully received by their label Epitaph, established by Bad Religion guitarist and songwriter Brett Gurewitz, 14 years earlier. After spending hours in his car listening to mixes of the album, he greeted his wife by telling her: “Honey, we’re going to be rich.”

This wave of interest in West Coast punk delivered a windfall, as the label also scored hits with NOFX’s million-selling fifth album Punk In Drublic and, the following year, Rancid’s blistering …And Out Come The Wolves. That last album’s title winked at the major labels circling Rancid while they stayed loyal to Epitaph. Bad Religion, however, joined Atlantic for their eighth album and belated breakthrough, Stranger Than Fiction.

The West Coast pop-punk explosion was momentous, and influential – that year, a then-unknown blink-182 cut their debut album, Cheshire Cat, at Westbeach Recorders, precisely because heroes Bad Religion and NOFX had recorded there – but across the U.S., other bands blending melody with caustic dynamics were coming of age. Connecticut-born geek Rivers Cuomo had relocated to Los Angeles, formed Weezer and committed to tape a batch of songs that allied pure pop melodies to alt.rock crunch and emotionally literate lyrics. Rivers was an unabashed Nirvana fan, but no slavish copyist, and Weezer’s Blue Album furthered Kurt’s savvy mix of noise and vulnerability, but with a voice uniquely theirs.

Emo – a nationwide movement, not tied to any state or city – resurfaced in 1994 with two key albums that defined the genre. Jawbreaker’s third album, 24 Hour Revenge Therapy, was 37 minutes of bellowed punk-rock intensity, swapping polish for passion, but still soaked in bruised tuneage. Sunny Day Real Estate’s debut, Diary, was a knotty, anguished but often brilliant beast, with a rhythmically complex tumult sent skyward by the brooding vocals of frontman Jeremy Enigk.

Neither album troubled the charts – “I know of a lot of bands that started because of our influence,” Jawbreaker drummer Adam Pfahler told Pitchfork recently, “but we were [only] selling in the tens of thousands” – though they’ve both since been recognised as landmarks. Among that ‘class of ‘94’, Kurt Cobain’s spirit could perhaps be heard clearest in their fusion of punk’s visceral dynamic with anguished lyrical chiaroscuro. SDRE imploded during sessions for their second album, but rhythm section Nate Mendel and William Goldsmith then joined Foo Fighters, whose debut album Dave Grohl had recorded alone in Seattle that October.

The more extreme terrains of 1994 also witnessed a thrilling period of transition. Having dragged thrash into the mainstream, Metallica were still touring their shelf-emptying Black Album. In their absence, pretenders made bold claims to the throne. Machine Head’s Burn My Eyes fuelled its infernal fury with news headlines, inspired by 1992’s LA riots and the FBI siege of the Branch Davidian cult in Waco. Shifting 400,000 units, it became Roadrunner Records’ best-selling debut album.

Pantera, meanwhile, had turned the glam-rock skeletons in their closet to powder with 1992’s pioneering groove-metal opus Vulgar Display Of Power. Its sequel, Far Beyond Driven, was a godhead power move in their quest for metal dominance, Dimebag Darrell’s furnace-hot guitar brilliance matched only by frontman Phil Anselmo’s acrid, growling, ugly howls. “Our top priority was to make a balls-out, heavy metal record with no compromising,” Phil Anselmo later told Rolling Stone.

As heavy as the American stuff was getting, it still seemed like kids’ stuff compared to a banner year for Norwegian black metal. Dimmu Borgir recorded their brutish first album For All Tid, scarcely hinting at the majesty that would follow, while the infamous Mayhem released their long-awaited debut De Mysteriis Dom Sathanas (though not before the grisly suicide of frontman Dead, and the murder of guitarist Euronymous by bassist Varg Vikernes). But the real story was In The Nightside Eclipse, the first full-length from Emperor, transcending the pantomime gore and no-fi sonics of the “black circle” (musicians who had congregated at Euronymous’ record store, Helvete). A year earlier, Emperor had abandoned the corpse-paint that characterised the genre; now, they delivered an album that matched their defenestrating assault to quasi-symphonic synths and a grandiose sense of anthemics. As the album hit shelves, drummer Faust was beginning a 14-year sentence for murder and guitarist Samoth was in jail for burning down a church.

More subtle sacrilege could be found within the grooves of Nine Inch Nails’ cerebral, murderous The Downward Spiral, wherein Trent Reznor bellowed ‘God is dead!’ with gleeful venom. On 1991’s inaugural Lollapalooza, Trent’s techno-rock stomp had shattered numerous paradigms, securing him a cult following. He spent the next two years squirrelled away in LA recording studios with only his sequencers, his self-loathing and a metric ton of drugs for company, fashioning a hellish, futurist epic.

“I didn’t try to cater to the mainstream,” he told Rolling Stone magazine in 1997. “I said to the label, ‘I don’t think there’s a fucking single in here. I don’t think it’s going to sell for shit.’ Then Closer takes off, and the record sells two or three million copies. I didn’t think people would get it…”

So 1994’s true narrative was one of renewal, of revolution, of creative and cultural uprisings, and new heroes budding into action. This narrative echoed outside of Kerrang!’s universe, too. Oasis, Blur, Jeff Buckley, Beastie Boys all spoke to the eclectic vibe of the era. But one of the most crucial albums of 1994 was Korn’s militant, ferocious self-titled debut. Jonathan Davis and cohorts threw titanic riffage, Devil-driving howls, spleen-spitting rapping and a whole universe of bad feelings into the cauldron. What came out was nothing short of heavy music’s genre-splicing new, metallic future.

Even without Nirvana, Lollapalooza ‘94 was, by all accounts, a rager, starring Smashing Pumpkins at their pomp-grunge peak and, of course, Green Day, stealing curious audiences hungry for their sticky sugar-high punk. But the key rock event of the year was Woodstock ‘94, a quarter-century on from the original festival of peace and love. Metallica brought heavy metal thunder to the hordes and Nine Inch Nails blitzed the crowd with their blood-flecked techno-thrash. On the final day, Green Day enjoyed perhaps their finest hour yet, as they dodged volleys of mudballs from the crowd – and, indeed, hurled tonnes back in return – and delivered a glorious punk rock anarchy. The show was a mess, and also an unforgettable triumph, with a message that was impossible to mistranslate: the future is bright, and the kids, as always, were alright.